An overwhelming 58.6 percent of Atascadero residents voted in favor on the November 2020 ballot for sales tax Measure D-20, which will generate $4.5 million annually for the city's general fund revenue. And residents have nine more opportunities to voice their thoughts on how the funds should be allocated. 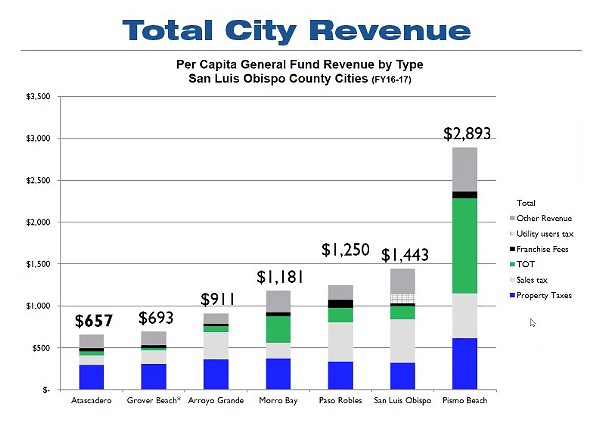 The first of 10 meetings kicked off during the Jan. 12 City Council meeting. Atascadero's carrying out the extensive public process because the city will soon adopt its two-year financial budget, 2021-23—and prepare a seven-year forecast along with it—and needs to consider the revenue that Measure D-20 will generate. The measure's increased sales tax rate will go into effect April 1.

Mayor Heather Moreno encouraged community members to attend future public sessions, six more in January and three in February, to have a "robust back and forth" with city staff. Many residents tuned into the virtual meeting via telephone and Zoom, but only one voiced his opinion during the meeting, and the city received one email from a resident ahead of the meeting.

In her email, bicyclist and homeowner Victoria Carranza said that when she looks at ways to improve public safety and health, she thinks about the quality of life and environmental equity around low-cost transportation options and accessibility to safe and connected streets.

"A big challenge to recreating and commuting on foot or by bike is traffic collisions and heat-related illnesses. There is an intersection to be made between trees and bikes. I'd like to advocate funding for streets that cool our town quite literally and make it more pleasant and safe to commute long distances on," Carranza said.

The resident who spoke up during the meeting directed his comments at Measure D-20 funds supporting emergency services and some general city services.

The police department wants funding to increase its staffing numbers from one supervisor and two officers to one supervisor and three officers to meet increased population needs. The Atascadero Fire Department is below the national average of 1.5 firefighters per 1,000 people—it currently has 0.6 firefighters. It also lacks the resources to maintain two fire stations, one of which doesn't meet the requirements for an essential services building and isn't earthquake retrofitted.

The resident told the City Council that perhaps the measure's funds could be used to hire a grant writing firm to look for grants to fund fire department staff increases and potential fire station renovations—ultimately alleviating city staff of the extra work.

According to a staff report, the anticipated $4.5 million Measure D-20 is expected to generate will go a long way, but it won't be enough to provide all the services, programs, amenities that community members might want to see. The public sessions will help the city understand what the community believes could be addressed with the new funding. Δ