Atascadero's aquatic paradox: While the city's groundwater basin is full of water, its lake is shrinking and full of junk 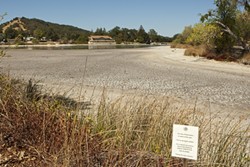 In water-starved San Luis Obispo County, it seems cruelly appropriate that even when a municipality takes one step forward to improve its water situation, it also takes a step backward.

That’s been the case this summer in Atascadero, as intelligent conservation measures, geological advantages, and backup supply planning have left the city with abundant drinking water in its sub-basin. Unfortunately, the sun’s rays and an invasive fish species have teamed up to cause a pungent, ugly mess at Atascadero Lake.

“The lake is not so wonderful right now,” Rachelle Rickard, Atascadero’s city manager, said at a Sept. 10 City Council meeting. “It’s only 4.5 feet deep at its deepest point, and it’s only 30 percent full.”

Above and beyond the lake’s extreme summer shrinkage, the plummeting dissolved oxygen levels in the shallow, hot water (largely due to algae die-off) have killed hundreds of fish (mainly carp).

The carp, according to Atascadero Public Works Director Russ Thompson, are a prolific and invasive species. Thompson said the city has never stocked the lake (aside from rumors that city founder E.G. Lewis or the California Fish and Game Department may have done so initially), but the carp still linger.

On Sept. 6 and 7, Thompson said he and 12 of his department staffers spent hours with shovels, pitchforks, and rakes scooping up between 400 and 500 dead fish from the lake.

“I had no idea there were that many fish in there,” Thompson told New Times. “It’s just unfortunate that it looks so sad and empty, but there’s not much we can do.

“We are really hopeful that the lake will be filled back up this winter with rain—it’s one of those ‘wait and see’ type things,” he said.

When asked by New Times whether or not Atascadero would consider getting rid of the problematic body of water, Thompson emphatically said that wasn’t an option.

“The local community and City Council support the lake; we just need to do some smart, effective things that will help the health of the lake, little by little,” Thompson said. “We have to roll with the punches.”

Aside from the dead fish, those punches have included a thickening, exposed, and putrid layer of dead biomass and bird poop; installing expensive permanent aerating fountains and temporary pumping units; and fielding complaints from peeved residents.

“Hearing from people, it’s been mixed,” Thompson said. “A lot of people out there understand that the water level is down and it’s just a natural occurrence. We’ve gotten complaints, too, along the lines of ‘Why hasn’t the city done more?’ and ‘This is terrible.’”

According to Thompson and Rickard, the reason the city hasn’t and isn’t able to do more is simple: It would be too expensive and, essentially, infeasible. Rickard said hypothetically transporting and de-chlorinating city drinking water (usually earmarked for higher-level uses) to refill the lake would cost a minimum of half a million dollars over 48 days. It would also be a temporary fix at best, she noted.

Thompson said the city is evaluating potential long-term fixes such as dredging and expanding the lake, but the permitting process steps for such an effort are manifold and time-consuming.

While the current futility of resolving the lake’s issues may leave residents with a bad taste in their mouths (and smell in their nostrils), the groundwater situation in Atascadero, according to Atascadero Mutual Water Company General Manager John Neil, should be the envy of the North County.

Neil gave a presentation during the Sept. 10 council meeting about Atascadero’s groundwater situation, and the news was almost entirely positive.

As Neil explained, Atascadero’s sub-basin is hydro-geologically distinct from the larger Paso Robles Groundwater basin, with the Rinconada Fault serving as a divider.

This is a good thing for Atascadero, Neil said, because the smaller sub-basin is filled up more rapidly by rainfall and not subject to the same intensive agricultural water usage as the Paso Robles basin.

Atascadero water rates for residents remain quite low comparatively, and, according to Neil, two straight dry years haven’t really affected the rates or overall water supply at all.

The city is planning for the future as well, Neil explained, signing up as one of the initial participants in the Nacimiento Water Project, which brings millions of added gallons per year down a pipeline.

“We are in a very comfortable position right now, though we always encourage our customers to conserve water,” Neil said.