The brave comedian standing at the front of the room has never been my best friend. In junior high, his brand of class clowndom had a way of turning dark, and I remember being at the receiving end of that storm more than a few times. 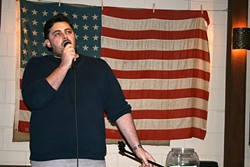 As Isaac croons, “I wanna fall in love,” there is even more butt wagging and even a little coy shimmying.

I have to hand it to Wilkes: It’s a pretty ballsy way to start off a set of stand-up—especially one that strips bare the self-perceived defects of his own life.

This, in essence, is the splendor of live comedy. It has a way of connecting us—grandmas, teens, stoners, and even journalists—with intimate, sometimes grotesque clarity.

Through the joy and the tears, we’re allowed to look at what’s hidden in the back of the fridge—not just to inspect the mold, but to dissect and celebrate it. Whose mold is weirder? Stinkier? We’ve all got fungus mounting somewhere, in some forgotten crisper drawer of our souls.

I’d like to think this is why Wilkes traveled from the Bay Area to his hometown of Atascadero for Tent City Beer Company Comedy Night’s second anniversary, held last Tuesday, May 5.

“The very first show was just me and Mason, and we didn’t know if anyone would show up,” said founder/comedian Mike Zalusky. “By no plan of our own, we lucked out and found that people were willing to go to a comedy show in Atascadero. It was bizarre, in a sense.”

An eager crowd of about 100 people showed up for the latest spectacle. Aside from founder Zalusky and his old pal, a cross section of local open-mic characters also spewed their humanity into our ears.

Zalusky—a well-known personality around these Northern parts—is the proud jester of an unruly, ever-evolving court. I remember the first time I saw him perform at the bar (formerly Molly Pitcher’s Brewing Co.).

“Self-deprecating” is putting it too nicely. Zalusky obliterates himself on stage with boisterous joy then builds himself up again, all the while teetering around the room with big, bulging eyes.

“Thank God these people keep coming back,” Zalusky said before the show. “We have so many creative people in this county, so it hasn’t been that hard to find people willing to get up there and write and perform. One guy or gal comes and tells a couple friends, and more come next time. It’s like a pop-up comedy scene. ‘Oh, you have space? Let’s do a show.’”

Taking the stage for the anniversary, Zalusky seemed even more wild than usual. In between taunting the loud talkers at the bar (seriously, everyone hates you guys), I peed in my tights just a little.

As a kid, Zalusky grew up on the same brand of zany TV comedy as I did. What '90s kid among us doesn’t remember microwaving some Bagel Bites before plopping down on the couch to watch Upright Citizen’s Brigade or Kids in the Hall on Comedy Central?

After a stint in LA, Zalusky decided to funnel his comedic efforts into his old stomping grounds. It came from a dual sense of passion (for comedy) and boredom (for everything else).

Held on the first Tuesday of every month, his little DIY comedy night has continued to balloon in popularity.

“There is stuff happening here in Atascadero. There is no ‘wouldn’t it be great if,’” Zalusky said. “It’s happening now, and local people are making it happen.”

I still really wish he’d write an inspirational quote-a-day calendar. This gem would surely be the page for Jan. 1, 2016: “If you wear a robe for 24 hours it actually becomes a fart cape.”

At one point, the funnyman poked his head through a cardboard cutout of a sexy Corona girl, making for the best photo of the night. Did I mention this all went down on Cinco de Mayo?

This is why, even though I grew up in Atascadero, I still love Atascadero. Weird things have always been happening. We’ve always had to do our own thing, make our own entertainment. After Captain Kidd’s arcade shut down, it was either drugs or dumping dish soap into the Sunken Gardens fountain for a laugh.

The kids who made their own fun may have gotten cited, but they got out alive.

“In LA or the Bay Area there are people in the comedy scene to look up to. We don’t have that here,” Zalusky said, “On the plus side, we also don’t have any rules. It’s our own style.”

And that’s about as refreshing as a frosty pint of Tent City IPA. Seriously, though: It’s all about the power of laughter.

Zalusky believes in that power wholeheartedly. That’s why he routinely hosts traveling comics in his own living room. That’s why he encourages everyday folks to jot down their gut feelings on a napkin and get up on stage.

“I don’t want people to feel intimated in any way about tying to do a comedy show,” Zalusky said. “You don’t have to be a comedian yourself or obsessed with comedy. You just have to be real.”

Hayley Thomas is laughing so hard substances are coming out of her nose, and they aren’t boogers at hthomas@newtimesslo.com.