View a slideshow of the Tamale Festival.

It’s almost 2 p.m. on Saturday, Jan. 23, as I approach Atascadero’s first annual Tamale Festival at Pavilion on the Lake, and it appears that the star of the show is already missing.

“I can’t find any tamales,” Joey Morrow, of San Miguel, says. “They’re getting more, but I don’t think they can make them fast enough. They just didn’t expect that many people.”

There are seven tamale vendors at the festival, and each of them brought more than 50 dozen tamales, according to Terrie Banish, Atascadero’s deputy city manager in charge of promotions, events, and outreach.

Aside from tamales, there are a variety of other edible goods available, such as corn on a stick, soft pretzels, tacos, shaved ice, and more. Attendees can get a refund if they can’t get tamales with their prepaid tamale tickets.

While I wait for more tamales to arrive, I explore the other aspects of the event. A variety of vendors sell arts and crafts, Freckles the Clown is painting faces, and folks are moving to the sounds of the Sol de Oro mariachi band.

At 2:30 p.m. I decide to get in line for the first tamales I’ve seen for sale since I got here. After a 30-minute wait in line, I finally get my hands on some tamales from members of The Light of the World Church. Their tamale production was a group effort, and they say they made everything with love for the honor and glory of God. All proceeds from their sales are going back to their church.

Now, it’s time to step away from the crowd and enjoy a tamale in peace and quiet. I pick a seat overlooking the moderately filled lake in the park and taste a traditional style jalapeño and cheese tamale.

I walk back to the heart of the action and notice a man pouring water over tamales on a smoking grill. The man behind these tamales, Steven Sullivan of Shave ‘N Flav Catering, looks up at me taking photos of his grill full of tamales and instantly puts one of them on a plate for me. As I excitedly picked up the hot plate, which I don’t have to wait in line for (bonus!), he tells me it’s not ready yet. He then proceeds to garnish the chile relleno tamale with colorful toppings and his signature sauce that he calls “Consuela sauce.”

Before I have time to pick up my beautifully presented tamale, Sullivan also fixes me up one of his award winning tacos. He tells me that tacos are a specialty of his and tamales are a new endeavor for him. He says he’s wanted to win a taco competition since he was about 9 years old, but his first time making tamales was just two weeks prior to the festival. 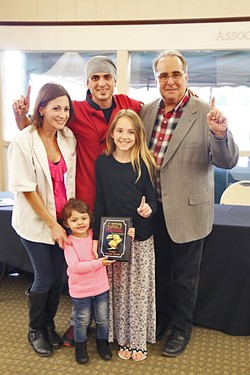 After thoroughly enjoying Sullivan’s specially garnished tamale and taco, I thank him and head to the awards ceremony, where coincidentally enough, the two first place winners for the two different categories, judge’s choice and people’s choice, were the only vendors I had a chance to try tamales from while at the festival.

While the outrageous flavors of the tamale from Shave ‘N Flav Catering still linger in my mouth, it’s announced as the winner of the Judge’s Choice Award. The Light of the World Church gets first place for the People’s Choice Award.

“It feels fantastic,” Sullivan says. “I wasn’t even expecting to get this one, I was just here to receive my award for winning the taco one. We didn’t go to sleep last night. My lady stayed up all night with me and watched the sun come up as we were rolling them. We left the kitchen, went home for a little bit, came back, went to the kitchen, pulled them out and then said let’s hit it.”

With all the vendors selling out of tamales, the festival proved itself to be a huge success worth repeating next year.