Atascadero's Wild Fields Brewhouse is open until 11 p.m. on the weekends, folks ... so grab a bite and a beer after the flick

Wild Fields Brewhouse is located just off El Camino Real and Highway 41, across from the Galaxy Theater: 6907 El Camino Real, Atascadero. Open Tuesday, Wednesday, Thursday, and Sunday 11 a.m. to 9:30 p.m. and Friday and Saturday 11 a.m. to 11 p.m. For more on Wild Fields, visit Facebook, Instagram, or wildfields.squarespace.com. Being that this is a brand-new place, Wild Fields is hiring. View their employment opportunities at wildfields.squarespace.com.

When my husband and I try to get out for a bite and a movie in our hometown of Atascadero, we book our sitter and usually eat super early, with all the seniors and the happy hour crews. Seeing a film first and having dinner after makes no sense, our bedtimes being what they are and all.

Plus, it's always seemed like no place in Atascadero serves decent food past 9 p.m. ... until now. We visited Wild Fields Brewhouse on a recent Friday night, and the place was packed with families and couples, with every seat taken at the bar. We started with two of our four beer flights, naming off our favorites, and then the food came up at the counter. Meanwhile, across the well-designed and beautifully lit space, families spread out, joyously, effortlessly playing games. Next time we'll bring the kids.

That massive building—the former bowling alley, across from the Galaxy Theater—was made into a local brewpub by Ryan and Jacque Fields. Ryan is the brewmaster: a Templeton/Cayucos local who studied physics at UC San Diego (which means he understands the mass per volume and cohesion of molecules of each beer he taps for us).

"My main focus when it comes to beer is just making a quality and balanced product that's approachable to everyone that has a balance of flavors," Ryan said. "I don't like beers that smack you over the head with one particular ingredient or flavor.

Heading up the operation as CEO and co-owner is Jacque, whom he met while they both worked at Pizza Port in San Clemente and Beachwood Blendery in So Cal. While Ryan took the brewmaster route, Jacque excelled in hospitality, moving up to a position as executive director of the Orange County Brewers Guild.

During the local brewery's planning process, the couple learned of the 100-year-old cedar tree that had been removed from Sunken Gardens and was sitting at Rustic Lumber in Santa Margarita. This tree is now part of the Wild Fields bar and booth seating, creating that warm, homey space they longed for.

With dietary restrictions for herself and for her 2-year-old son, Russell, she said she was mindful of special diets when composing the menu. She even talked me into trying the vegan Brewhouse Bahn Mi, made with a marinated and grilled carrot, which I swear on my Grandpa Earnest's German beer stein is the best "hot dog" I have ever tried. 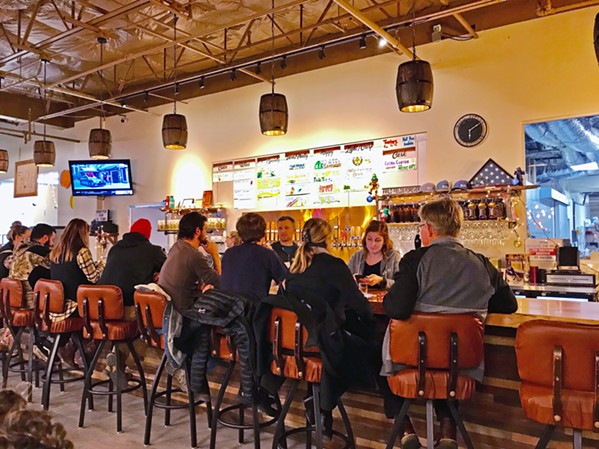 Being that the building used to house the old Atascadero bowling alley, the owners incorporated Rollerball, aka mini bowling lanes, in their remodel. Rollerball, Jacque explained, is essentially a blend of "arcade meets bowling," a no-fuss, bowling shoe-free game with half-size balls and half-size lanes.

The pub also keeps it fun with an arcade, air hockey, foosball, and a toddler corner.

The Fieldses like to think of their menu as a comfort food "playground," with some super-affordable prices. They serve bites such as chips and onion dip, veggie and hummus plates, grilled broccoli with house-made cheese sauce, pickled veggies and brie, or a simple pickled egg served with pretzel sticks.

The Bundled Up portion of the menu serves up sandwiches like the Polish kielbasa and the Brewhouse Bahn Mi. For the purists is the Just the Meat section, with your choice of one sausage (one topping, two sauces, one side) or the sausage trio. There's also the build-your-own option, with choice sausages to be paired with cheese sauce or more than a dozen other sauces (including chipotle aioli or vegan mayo) plus toppings, which include pickled jalapeños or three-bean chili (vegetarian available too) for an extra buck.

And the Half-Pint menu is classic: hot dog, PB&J, mac 'n' cheese, or grilled cheese for $4 or $5, and it comes with potato chips, pretzel sticks, or apple slices.

The beer menu will rotate the 14 or so house beers. His wide variety of styles and flavors include four categories of beer: light and crisp, hoppy, dark and malt, and Belgian and specialty. My BFF was the Imperial Coffee Stout Unstuck in Time, and my husband raved about the R2JZ Double IPA with Pineapple. The pineapple was just a little essence, nothing overdone.

"West Coast IPA is also my jam," he said. "As I get older and drink more and more beer I kind of like a lower and lower ABV [alcohol by volume], more nuanced, lighter flavors.

"The most important thing is that we have a beer for everyone." Δ

Flavor writer Beth Giuffre is glad there's a beer for her. Send your favorite brews to bgiuffre@newtimesslo.com.