September 16, 2010
comment
If you’re reading this on Thursday, Sept. 16, you’ve probably noticed 3,500 new squeaky-clean kids invading SLO Town, but they’re just the tip of the iceberg. I suspect this weekend thousands more will return, filling up apartment complexes and neighborhood rentals, parking their cars everywhere, driving their cars too fast and the wrong way down one-way streets. Yes, friends, it’s the annual migration of Poly students, that mixed blessing that fills businesses’ coffers and drives NIMBY residents bonkers. One set of businesses that are pleased are bar and club owners, and they’re ramping up the entertainment in preparation.

Take Downtown Brew, for instance. They’re hitting the ground running on Friday, Sept. 17, with punk legends The Melvins (7 p.m.; all ages; $14 presale or $15 at the door) with Totimoshi opening. The Melvins, whose dirgy, heavy punk borrows from the ’70s metal sounds of Black Sabbath, are touring in support of their recently released album The Bride Screamed Murder.

On Sunday, Sept. 19, college favorite Sherwood returns (7 p.m.; all ages; $13 presale or $14 at the door). This is a group that formed at Cal Poly in 2002 and used Myspace to launch themselves into a West Coast sensation. 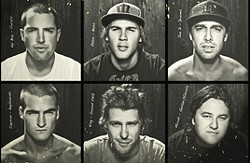 On Monday, Sept. 20, the first day of classes for Cal Poly, students can take the edge off with reggae sensations Iration (8 p.m.; all ages; $18 presale or $20 at the door). Formed in Hawaii and relocated to Santa Barbara for the last couple of years, this is one of the hardest-touring bands around, delivering music that extends beyond typical reggae boundaries. Calling their sound “New Roots,” Iration brings a modern twist to this classic Jamaican genre.

I’m most excited about the show on Tuesday, Sept. 21, when Trombone Shorty & Orleans Avenue return (7 p.m.; 21-and-older; $17 presale or $20 at the door), with Funk n Public opening. I caught Shorty on his last trip through town, and he delivered a blistering set of authentic New Orleans jazz dripping with soul and injected with contemporary funk sounds.

Buy advanced tickets for these shows at Boo Boo Records or online via ticketweb.com.

If you like singer-songwriters, Steve Key has you covered at locations throughout the county with his Songwriters at Play showcases, which feature a principal performer as well as up to eight local songwriters.

On Thursday, Sept. 16, from 6:30 to 9:30 p.m. at The Porch in Santa Margarita, Paul Sprawl returns to the county. His percussive guitar work, bottleneck slide, beatbox, and harmonica combine to set a stunning backdrop for tunes about the downtrodden and forgotten. With eight CDs to his credit and 10 years on the road, he has tons of material to draw from.

Wednesday, Sept. 22, marks the first night of a new ongoing series at Spyglass Inn in Shell Beach, when Steve Key brings his Songwriters at Play showcase to yet another venue. The new series kicks off with L.A. duo Freddy & Francine: the result of a multitude of late-night writing sessions between Bianca Caruso and Lee Ferris. “Drawing from influences like Ray LaMontagne, The Swell Season, and The Rolling Stones, Freddy and Francine are building their story behind beautiful vocal harmonies, a solid writing style, and a captivating live set,” says their press release. The new series happens every Wednesday from 6:30 to 9:30 p.m.

Key is also host to a showcase every Monday at Rose’s Landing in Morro Bay. 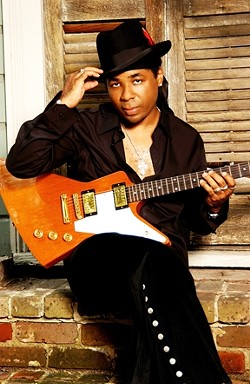 Swampy, funky, soulful, proud—those are a few words that come to mind when listening to Baton Rouge-born multiple Grammy-winner, actor, and blues innovator Chris Thomas King’s newest CD Sketches of ‘Treme, a recording filled with traditional and electric blues, the hip-hop blues fusion that he pioneered, and New Orleans-inspired ballads.

On Saturday, Sept. 18, the SLO Blues Society celebrates its 30th anniversary with Grammy winner Chris Thomas King and opening act Guy Budd and the Soul Gypsies during an 8 p.m. show at the SLO Vets Hall. Start with free dance lessons at 7:30 p.m. Tickets cost $20 at the door. You must be 21 or older to attend.

The Latino Outreach Council of SLO County presents “Fiesta Mexicana” at the Farmers Market on Thursday, Sept. 16, to celebrate 200 years of independence for Mexico. Expect ceremonial dancers and a special presentation by Rogelio Flores from the Mexican Consulate. The event begins at 6 p.m. with Aztec and folkloric dancers, followed by Mariachi Mexicanisimo. The shout for independence, “El Grito de Independencia,” and the ringing of the ceremonial bell will occur at 7 p.m.

The running joke at Sustenance Cooking Studio is, “How do you make a small fortune at Sustenance? Start with a bigger fortune.” That’s because owner-operator Seamus Finn Chandler is always giving stuff away, donating the space to charity, and forgetting to charge people. On Thursday, Sept. 16, that tradition continues when Sustenance donates its space and finger foods during a fundraising concert with Al Ferguson & Friends. It’s BYOB, and 100 percent of your $10 donation at the door goes to Nigel Holland’s Caring Bridge (caringbridge.org), which helps families facing cancer. The music starts at 7 p.m.

This just in from Malik Miko Thorne at Boo Boo Records: “I know this is super late notice, but I just booked an in-store yesterday with Merge recording artist The Radar Brothers, for Friday, Sept. 17, the same day as the WOW downtown takeover. We’re tentatively planning for the in-store to take place at 6 p.m., though we’ve been holding out to confirm a possible Melvins DJ set and/or meet and greet, though it looks less and less likely. Merge is the same label that put out Arcade Fire, and the Radar Brothers’ Singing Hatchet is still a favorite album.” Show up at 6 and see what’s what!

The Damon Castillo Band will ignite the Central Coast Cancer Challenge Stage on Saturday, Sept. 18, to raise funds for cancer support services in SLO County. The performance is dedicated to the band’s founding bassist, Matt Taylor, who lost his battle with cancer in 2002. The event is a multi-sport event with running and cycling, a wellness expo, and a concert from 7 a.m. to 2 p.m. at Laguna Lake Park. Castillo is the headliner taking the stage at noon. The event is free.

Duane Inglish is so entwined in the local music scene, it’s hard to imagine it without him. He was a founder of Live Oak, owned the Dark Room, has been in any number of bands over the years, and, on Saturday, Sept. 18, will host his eighth annual musical reunion of friends and neighbors during Inglish Fest starting at 3 p.m. (For directions and details, visit inglishfest.com.) “We’ll have a full lineup of great music featuring luminaries from SLO County and beyond,” Duane said. “We’ll continue well into the evening with campfires and jamming afterwards.”

Take that last taste of summer on Saturday, Sept. 18, with a $10 fundraising concert hosted by the Paso Digital Film Festival and Le Vigne Winery at Sylvester Vineyards from 5 to 8:30 p.m. Singer-poet John Andrew Parks and actor-musician Robert Carradine headline the event, which also features local chanteuse Jade Jackson opening the concert. Barbecue and wine will be available for purchase. RSVP at 227-4000. Proceeds benefit the Pullman Restoration Fund.

I personally can’t get enough of The Tipsy Gypsies, whose Gypsy jazz sound and bright ’20-style vocals never fail to engage me, especially since their tunes have such an interesting campy milieu. On Saturday, Sept. 18, they’ll play The Clubhouse from 8 to 11 p.m., with guest artist J. T. Matherly on mandolin. The cover’s $7 at the door. Bring some extra dough for their awesome album Lipstick Holdup; you won’t regret it!

Big Jugs! Now that’s a band name I can get behind. On Saturday, Sept. 18, Big Jugs plays the oldest bar in the county, the Elkhorn, at 9 p.m. Big Jugs’ motto is “Keepin’ country dirty,” and they’ll deliver a rousing set of country, Americana, and rockabilly. This is a band whose influences include bar fights, table dances, whiskey, beer, public intoxication, drunks, drinking, drunking, and bar fights. And don’t forget banjo pickin’!

“Hot Jazz,” an event to showcase the talents of trumpeter Jeff Elliott—who toured with Doc Severinsen’s Big Band and played with Les McCann, Flora Purim, Airto Moreira, and Aretha Franklin—happens from 3 to 5 p.m. on Sunday, Sept. 19, at St. Benedict’s Episcopal Church in Los Osos. Tickets cost $25 for adults and $15 for those younger than 18, at Boo Boo’s or by calling 782-0400 or 534-1514. Admission includes hors d’oeuvres, wine, and soft drinks. The performance by the Real Time Jazz Band honors the late pianist Edd Richards, a beloved member of St. Benedict’s congregation. 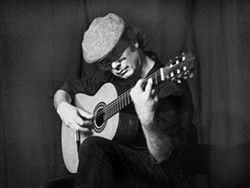 Local vocalist Deanna Delore joins classical guitar guru James Edwards for an outdoor concert on Sunday, Sept. 19, from 4 to 6 p.m. at the SLO Botanical Garden Amphitheatre, to perform both traditional classical pieces and their own vibrant arrangements (all ages; $20 tickets; $2 parking fee; local wines and Shock Top beer for $5). All proceeds benefit the Botanical Garden.

French indie outfit SAIBU blends “folk, pop, and rock heritage from both sides of the Atlantic ocean to create their own sound and atmosphere,” according to frontman Victor Pavy, whose band has opened for American indie icons such as Yo La Tengo, Black Rebel Motorcycle Club, and Jayhawks’ Mark Olson. They’ll play Tuesday, Sept. 21, at The Clubhouse and Wednesday, Sept. 22, at Last Stage West on Hwy. 41.