Attempted dispensaries in Guadalupe, Orcutt go up in smoke 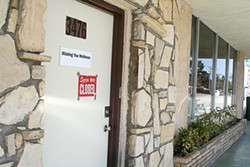 Central Coast patients seeking to soothe their pain with medical marijuana will have to continue to wait for relief. Two more Central Coast dispensaries, one proposed and one attempted, recently got the thumbs down.

Following the closure of the short-lived Wishing You Wellness dispensary several weeks ago, Central Coast residents have remained without so-called “safe access” to medical marijuana. But it’s not for a lack of people trying.

Take George Alvarez. Alvarez filed a permit application with the city of Guadalupe May 12, only to be shut down by the City Council, which imposed a temporary moratorium. Just weeks before, Morro Bay’s council went down a similar path in response to someone else’s inquiry.

Alvarez is a certified drug counselor, a four-year commissioner of the Santa Barbara County Advisory Board on Drug and Alcohol Problems, and a former Guadalupe city planning commissioner. He’s also a relative of the city’s mayor.

If it’s an unlikely resume for a man who wants to open the only medical marijuana dispensary on the Central Coast, the 60-year-old diabetic said as a young man he watched a family member waste away from cancer. He said his mission is about compassion for the sick, not about the money.

“I am willing to spend the time and effort to see if it’s doable, if it will serve that population that really needs it,” Alvarez said. “I want to do everything I can to give them some human dignity before they die and to relieve any pain they might suffer from accidents, Agent Orange, or anything that a doctor says that [marijuana] will relieve.”

Alvarez said he’d kicked around the idea of opening a marijuana dispensary for more than a year, and when he heard that Guadalupe Mayor Lupe Alvarez was seeking an urgent ordinance that would place a temporary moratorium on the opening of any dispensary in that city, he decided to try to beat the clock.

He arrived at City Hall on the morning of May 12 and applied for a medical marijuana dispensary business license hours before the emergency meeting, he said. That evening, he stood before the council arguing that the city didn’t have any regulations in place regarding a dispensary when he applied and therefore would have to accept the application. The council disagreed.

The City Council approved the emergency measure by a unanimous 4-0 vote, prohibiting the establishment of a dispensary in the city for 45 days. Mayor Alvarez was absent for the vote; he was out of town.

But the mayor said he would have voted no. Despite the family connections, he said he and George are on different sides of the issue. Mayor Alvarez said he’s worried a dispensary could attract crime, if only to the dispensary itself.

According to Guadalupe City Attorney David Fleishman, the decision to temporarily ban dispensaries is a direct response to what happened in Orcutt weeks earlier, when Wishing You Wellness opened its doors for three days, much to the surprise of Orcutt officials. It shut down in the face of permit issues.

“This is not an issue of trying to overrule what the voters did,” Fleishman said, referring to Proposition 215.  “We’re taking care of something that has been identified in other cities, that has issues of establishment.”

Proposition 215 was passed by California voters in 1996 to allow seriously ill patients access to marijuana if it was recommended by a doctor. Since 1996 a dozen states across the country have enacted similar laws to decriminalize marijuana for medical use. It created a number of issues with law enforcement, however, and SB 420 was passed by the California Legislature to try to clear things up. It established that patients could organize as “co-ops” or “collectives” to share and distribute marijuana, and even be compensated for it. Many patients created dispensaries based on the guidelines of SB 420.

After SB 420 most California law enforcement agents stopped arresting medical marijuana users for possession and cultivation, but the federal government has been raiding dispensaries since the beginning.

Connie Jones, owner of a pet-grooming store located next door to the doomed dispensary, said she spoke with one man in the early morning hours before the shop’s closure, too frail and weak to get out of his car.

“He said that the doctors had him on Vicodin and all kinds of painkillers, until he almost went into kidney and liver failure,” Jones said. “Finally the doctor gave him a permit to use marijuana and he said, ‘I’ve driven from far away to get it, but even though they said it was legal, you can’t find any place open that’s dispensing it because they keep shutting them down.’  He said, ‘I guess I’ll go home and take the other painkillers and die from it.’”

Alvarez vowed to keep fighting for the dispensary, even if he isn’t destined to be the one to open it in Guadelupe.

“This is going to be a dogfight and I want to take the lead,” he said. “If it comes out that it’s not doable and I’ve turned over every rock and did everything I can, then I can apologize to the general public and say I tried to get something done.”

Jeremy Thomas is a staff writer for the Santa Maria Sun, New Times’ sister paper. New Times writer Kylie Mendonca contributed to this story. Jeremy can be reached at jthomas@santamariasun.com.