The legal arguments are in from both sides of the San Luis Obispo County redistricting battle. 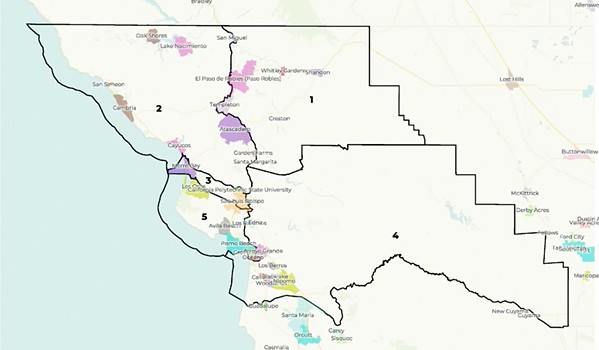 SLO County Citizens for Good Government filed a motion for a preliminary injunction against the county's adopted Patten map—picked by the Board of Supervisors in December as part of once-a-decade redistricting—which critics have called "blatant gerrymandering" by the Republican Party.

The court scheduled a Feb. 9 hearing on the motion in the face of a set of immovable deadlines for the June 7 election. In a legal brief filed by the SLO County Clerk-Recorder's Office for the case, officials explained that the office has until Feb. 15 to deliver maps to the secretary of state.

"I want to acknowledge the time constraints the clerk-recorder is under," Judge Federman said to open the Feb. 9 hearing, which was livestreamed on the court's website.

In respective briefs and declarations filed ahead of the hearing, attorneys with Citizens for Good Government and the outside counsel for SLO County laid out their cases. The attorneys continued those arguments in front of Federman on Feb. 9.

"You're being asked as the court to take an extraordinary step here," SLO County's counsel, Jeffrey Dunn, argued on Feb. 9, "to essentially usurp the entire public legislative process."

In its brief, county attorneys denied there was any evidence suggesting that the Board of Supervisors purposefully acted for political gain, and emphasized that redistricting is a legislative matter up to the discretion of elected officials.

"The record is replete with evidence that the Board of Supervisors considered and applied each of the mandatory criterion in [the California Fair Maps Act], and did not adopt the challenged map 'for the purpose of favoring or discriminating against a political party,'" the county's brief read. "The motion should be denied."

Meanwhile, Citizens for Good Government attorney Ellison Folk argued that the Patten map clearly favors local Republican voters by "packing" more Democratic voters into two districts and generating Republican advantages in three districts, including Districts 2 and 4. The reshuffled map also disproportionately defers Democratic voters who will vote in 2024 instead of 2022 under the Patten map, Folk said.

"The important thing to remember is the courts have recognized that the governing body is not going to stand up and say, 'Yes we did this for a partisan purpose,'" Folk argued on Feb. 9. "They know officials might be astute enough not to say something like that. And so courts look for circumstantial evidence."