A detailed audit of the management practices of the South SLO County Sanitation District’s former administrator reveals troubling issues, including a spike in billing to his engineering firm and other practices that cost the district millions of dollars during his tenure.

The audit, which cost the district more than $91,700, also pointed to potential malfeasance during the tenure of former administrator John Wallace. Among the audit’s recommendations is a suggestion that the district provide the results to law enforcement for further review.

The audit, conducted by a Thousand Oaks-based firm, covered the final nine years of Wallace’s term as the district’s top administrator before he resigned from the position in 2013 over accusations that he had a conflict of interest. In addition to his work as the sanitation district administrator, Wallace’s firm, the Wallace Group, also provided engineering services for the district. 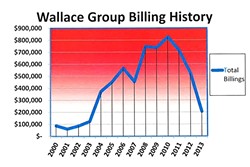 According to the audit, the firm assumed control over all aspects of the district’s financial affairs, including the approval of the Wallace Group’s invoices for payment for its services. As that happened, billing from the Wallace Group rose from 81 hours and $3,600 per month in 1999, to more than 600 hours and $70,000 per month by the end of 2010.

“During this time, the Wallace Group received over $6 million for administrative fees, engineering fees, and major budget item projections,” the audit stated.

The audit also noted that district staff were capable of doing much of the administrative work—at no cost—that was billed to Wallace’s firm and laid some blame on the district’s past boards of directors, who approved the billing invoices and approved giving projects worth more than $25,000 to Wallace’s company without going through the required competitive bidding process.

One of the most disturbing allegations in the audit claims that Wallace potentially tried to solicit payments to his company from an entity seeking a discharge permit from the sanitation district. The incident occurred in 2009 when Dena Bellman, an employee of the state Parks and Recreation Department Oceano Dunes District, was seeking the permit for the LeSage discharge site. After being told that there was possible contamination from the site, the employee said Wallace allegedly handed her his business card and told her that his firm could draw up engineering plans for the site for $300,000. She turned down the offer. The permit wasn’t granted until 2014 after Wallace left, the audit stated.

“[Bellman] recalled at that meeting she felt that Wallace was threatening to close down the dumpsite if she didn’t use his firm to fix the apparent dumpsite issues that had something to do with apparent violations,” the audit stated.

Current sanitation district Superintendent John Clemons told the auditors that another entity had a similar problem obtaining a permit at the same time.

That recommendation is one of several that will come before the sanitation district board for a vote. Board Director and Arroyo Grande Mayor Jim Hill said he was in favor of sending a copy of the audit results to law enforcement.

Speaking to New Times, Wallace said he had received the audit results and was reviewing it.

“There are reports and observations that we feel are incorrect,” Wallace said.

The audit characterized Wallace as cooperative and responsive to questions and requests for documents during the six-month audit process.