August and everything after: Locals have struggled to piece together the narrative that's followed six Cal Poly student arrests

Before classes officially began for the fall quarter, six Cal Poly students had already been arrested and charged with multiple felonies stemming from an alleged armed robbery attempt at an off-campus fraternity house and alleged drug activity at that same location. 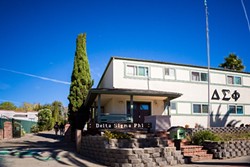 The story was, as you might expect, everywhere. Multiple media outlets (including this one) offered takes on the timeline, Cal Poly officials issued several statements, legal and law enforcement authorities weighed in, and the community at large was buzzing with conversation.

Then, things got quiet.

The natural ebb and flow of legal processes, criminal investigation, and the news cycle are all reasonable explanations for this change in intensity. Before any kind of official investigation can take place, of course, all of the particulars have to be sorted out.

However, it’s important to note that much of the response to these arrests thus far has been extremely black and white.

University officials have uniformly expressed dismay at the suspected criminal activity and pledged to investigate and reform to the best of their ability. Meanwhile, the San Luis Obispo County District Attorney’s office is determinedly moving ahead with multiple-count felony cases against all six arrestees.

Seeking a complete-as-possible picture of the criminal investigation, the legal case, the university’s response, and how all parties will be moving forward, New Times examined hundreds of pages of documents and reached out to many people involved in this ongoing situation.

Ultimately, this investigation revealed some new answers, many more questions, complications, a high degree of opacity, and—above all else—shades of gray.

The arrests and the cases

In the early morning hours of Aug. 10, San Luis Obispo police officers responded to reports of a robbery in progress at the off-campus Delta Sigma Phi fraternity house.

After a violent scuffle at the scene, police arrested two Cal Poly students and football players: Cameron Akins and Cortland Fort. Officers then arrested three of their peers—Dominique Love, Jake Brito, and Kristaan Ivory—later that morning in connection with the alleged attempted armed robbery.

An official criminal complaint was filed on Aug. 22, and that document describes Akins wearing a “black hoodie” and a “mask-like cover over his face,” wielding a .38 caliber Derringer handgun, and demanding “money and drugs” from multiple residents of the frat house.

The DA’s office additionally alleged that Fort was discovered on Aug. 10 in a rented Kia Optima with the lights off in a nearby parking lot. Authorities say they discovered Ivory’s wallet and cell phone, as well as Akins’ and Brito’s wallets, in the rental car.

As of press time, all five have retained lawyers, pleaded not guilty to all the charges they’re facing, and are awaiting further adjudication. They’ve also all been indefinitely suspended from the football team.

On the morning of Sept. 4, an inter-departmental team of law enforcement personnel searched the same fraternity house on a search warrant, leading to the arrest of Gear McMillan—a Cal Poly student and former Delta Sigma Phi president—on suspicion of drug-related offenses.

Court records and university records examined by New Times show that none of the six students remains in custody, and all but one of the students are still enrolled at Cal Poly (Fort is no longer enrolled).

None of the six students responded to a request for comment from New Times, and their respective attorneys either didn’t respond or declined to comment for this article.

Thus far, that’s the sum total of the official legal cases against the students. However, further interviews—as well as emails obtained through a California Public Records Act request—reveal a more complex situation around the periphery of the case.

One of the major revelations from the 189 pages of Cal Poly emails recently obtained by New Times—pertaining to the arrests and written between Aug. 8 and 26—is that neither the fraternity nor the football team took the consternation lying down.

“Per Dr. Shutt, cars are driving by at night and harassing DSP fraternity brothers living in a neighborhood home. He says the people in the car(s) are football players,” Sebastian wrote. “The fraternity brothers are getting worried. Dr. Shutt says SLO PD knows, but wants the university to know and put an end to it immediately.”

In an email sent 30 minutes later, Dean of Students Jean DeCosta confirmed that at the fraternity house “unknown individuals were driving by and yelling obscenities and angry responses regarding the football team status.”

Director of Athletics Don Oberhelman chipped in later that afternoon on the same thread, writing that “I heard from one of the FB players this morning that the same thing has happened to them when walking near campus” before adding that “we will discuss the issue with our football team, and he [another DSP advisor] will discuss them with the fraternity going the other way.”

Most emotional of all is an Aug. 14 email from a DSP brother (whose name was redacted) to President Jeffrey Armstrong.

“A few of my brothers have been getting harassed by fellow Cal Poly students over the last few days,” the student wrote. “Statements such as, (excuse the language) ‘Fuck you, DSP. You ruined our football team’ have been yelled from a white two door car driving past our property.

“It has also been expressed that brothers in this house have been glared at by members of the football team. I don’t want to say that it is because of the email you released on Aug. 13, however the message does not help the situation,” he wrote.

The email alludes to Armstrong’s statement sent out to the whole university—actually released on Aug. 12—that said, in part, that “five student-athletes from our football team were arrested over the weekend in an alleged armed robbery that San Luis Obispo police believe may have involved drugs.”

When asked if he or any university administrators would be willing to comment for this article, university spokesman Matt Lazier wrote in an Oct. 16 email that “in light of the ongoing proceedings related to the incident, the university cannot provide further detail at this time.”

When asked about the conflict between the fraternity and the football team, current Delta Sigma Phi Chapter President Derek Morefield told New Times that there was “a little bit of blowback” and that “people are going to say what they want to say.”

“Ultimately, I believe we still have a solid relationship with the football team,” Morefield said. “We actually have plans to go to one of their games as a chapter this fall.”

For the fraternity, the elephant in the room is the arrest of McMillan—who served as chapter president during the 2013-14 academic year—on suspicion of drug possession at the DSP house.

Much of the outrage over the perceived harassment by the football team was predicated on the fraternity’s status as the innocent victim of a violent crime.

Characteristic of that sentiment is the second half of the Aug. 14 email from the anonymous DSP brother to Armstrong.

“It is completely false that there is any evidence of drugs being involved in this crime and to say such a statement without knowing it is true puts our fraternity in a bad light,” the brother wrote. “It has many members, alumni, and parents outraged.

“We would love to see another statement saying the truth, which is, there is NO CONNECTION between DSP and any illicit drug use, purchased or distributing. People are getting the wrong idea, and frankly it is because of a misinformed email,” he wrote.

In a separate conversation with The Tribune before his arrest, McMillan himself said “the idea that this was somehow about drugs is shedding a negative light on us in the community.”

When asked about these comments and those in the community who might take offense to the apparent hypocrisy, DSP Chapter President Morefield urged patience while adding that McMillan is on indefinite suspension from the fraternity pending the outcome of his criminal case.

“Our fraternity isn’t made up of one person—we actually have about 100 brothers,” Morefield said. “[McMillan’s] innocence or guilt is yet to be proven, and I personally believe more is being made of this case in the media than what was actually going on.

“There’s always two sides to a story, so as the facts come out and it’s litigated, we’ll get a clearer picture,” he added.

On the other side of the spectrum, SLOPD Chief Steve Gesell wrote in a Sept. 4 statement that his department was disturbed by McMillan’s alleged actions.

“Drugs were a variable that precipitated an armed robbery attempt that put multiple lives at significant risk and resulted in the injury our officers [sic]; officers that were willing to risk their own lives to protect the residents of this fraternity,” Gesell wrote. “For some of those very same people to deny culpability and brazenly continue to ‘do business’ without recognition of this fact is disturbing.”

Patrick Jessee, the Indianapolis-based executive director and CEO of Delta Sigma Phi, told New Times that the fraternity’s own “internal investigation” into McMillan’s arrest is complete, having found that “the chapter itself was not responsible for Delta Sigma Phi policy violations” while also issuing “a warning as a result of member misconduct.”

Beyond the conflict between DSP and its critics, the emails obtained by New Times shed light on how university administrators have framed the ongoing controversy—and how the community has subsequently reacted.

In the days following the Aug. 10 incident, there was no shortage of outrage among those in the Cal Poly orbit.

Kimball Norup, a Poly alumnus, told Armstrong in an Aug. 13 email that, “Hearing the recent news about scholarship athletes committing armed robbery is both disgusting and deplorable … call me ashamed.”

A parent of a prospective student—whose name was redacted—wrote to the Cal Poly admissions department on Aug. 23 and said that, “After reading the news this evening, I am relieved to inform you that [redacted] will not be applying to Cal Poly, San Luis Obispo, as we had planned … I just can’t imagine how your team of professionals rationalize the situation you currently find yourselves in.”

Perhaps most scathing was an Aug. 13 email written by a Santa Barbara Police Department officer whose name was redacted, addressed to Armstrong.

“Where drugs and guns are concerned, cannot be tolerated in any way,” she wrote. “I was working the night Elliot Rodger rampaged through Isla Vista and have seen the devastating effects that has had on the UCSB community.

For their part, university officials—Armstrong and Lazier have been the only two to make public statements—have expressed dismay over the allegations and promised policy changes, such as increased drug testing among football players and various future investigatory efforts.

However, in those statements, they’ve remained deliberately vague on specifics, processes, or any kind of timeline. When asked by New Times for details, Lazier has either cited the “ongoing proceedings” in court as an obstacle for disclosure or argued that FERPA law (which, when interpreted broadly, can privatize large swaths of individual student conduct information) prevents him from commenting.

Although Lazier had said the university would “move swiftly to take the appropriate responses” in an Aug. 11 statement, he wrote in an Oct. 16 email to New Times that the university will “continue to monitor and review our student conduct policies and procedures.

“We will also be pursuing an independent internal investigation to fully understand the incident and its implications,” he added. “Cal Poly understands and takes seriously the charges in this case.”

In a response to that emotional email from the SBPD officer, Armstrong copied his Aug. 12 statement while adding that, “The law enforcement officials have requested that we hold on our internal investigation until the criminal investigation has concluded.

“At that time, we will engage in a full campus investigation using external resources and it will be thorough and far reaching,” he wrote.