If, like me, you couldn’t get your bosses to send you to the SXSW music festival, a little taste of the Austin scene is coming to us. Gina Chavez, an award-winning Austin performer, will tour through SLO in support of her second album, up.rooted.

She first received national recognition from NPR’s “All Songs Considered” and “Alt.Latino” for her debut SXSW performance as one of the new Latin artists to watch, and the Austin American-Statesman calls her “a true Austin music treasure—angelic vocals and a devilish treat on guitar.”

I’ve got to agree; I love this new record. It’s got so much diversity, with songs that range from heartfelt ballads to proud anthems.

“This album is a rhythmic exploration of who I am,” Chavez said in press materials, “a sonic garden of stories from an ethically mixed woman on a journey to uncover her lost Latin roots.”

Chavez’s parents are of Mexican and Swiss-German descent, and they raised her on the music of Lyle Lovett, Little Richard, and Michael Jackson. “Her lifelong musical journey was inspired at Austin’s famed Continental Club and led to a semester in Buenos Aires, Argentina, all the way to her community work in El Salvador in one of the roughest neighborhoods,” according to her bio. “The result is a passionate album traversing cumbia, bossa nova, vintage pop, reggaeton, and folk combined with her dynamic vocals and sharp social commentary.”

See Gina Chavez this Thursday, March 27, at Sally Loo’s (1804 Osos, by the train depot), at 7 p.m. The cover is $5 at the door, but bring some extra dough and buy this excellent album. 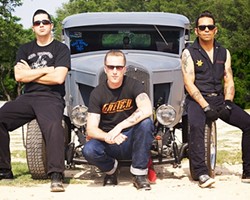 The bad boys of rockabilly are back! The Chop Tops return to SLO Brew this Friday, March 28 (7:30 p.m.; 21-and-older; $10). Led by Sinner (probably not his real name!), the vocalist and standing drummer, this trio of hard charging rockers deliver kickass rockabilly, psychobilly, old punk, teddy boy, and surf rock. Shelby’s on guitar, and they have a new bassist in Josh. Cuff those jeans, grease that hair, and get ready to rock.

The Brew kicks off its week with Moving Units on Thursday, March 27 (8 p.m.; all ages; $12 presale or $14 at the door), with opening acts Goldboot and King Walrus & The Magicians. The headliner says to “think of a long-lost album of Italo-disco covers of Sonic Youth songs and you begin to get close” to their sound. “It’s about that universal experience and adventure of being young and free to ramble,” said founding member Blake Miller. “It attempts to capture the same feeling you get whether you’re exploring the city with your friends or road tripping across the country. And of course, it still brings the sleazy sweaty live dance party feel that Moving Units was founded on.”

The Zongo Allstars and Captain Nasty plays SLO Brew on Saturday, March 29 (7:30 p.m.; 21-and-older; $10 presale or $12 at the door), promising a night of delicious Cali-Cubano Latin jazz and funk from old pros Zongo and Afrobeat funk from newcomers Nasty, a local eight-piece ensemble whose instrumentalists meet at Cuesta College. They’ll release their debut album this summer. Things could get sweaty up in this joint.

And in “the kids are all right” department, check out The Spaces Between, whose debut album, Let’s Leave it at This for Now, features music, musicianship, and songwriting that belie the group’s youth. These guys are just kids—Andrew Rubin (guitar), Noah Colton (bass and vocals), and Liam Smith (drums)—but they’re dishing up funk, jazz, alternative, and rock like veterans. They even managed to get Jon Anderson of Yes fame to join them on one of their album’s songs, “Orchasm.” See them on Sunday, March 30 (7:30 p.m.; all ages; $10 presale or $11 at the door), with Green to White and Panga opening. 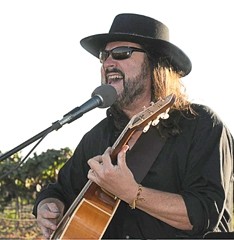 A local do-gooder needs some help. Cary McGill grew up in Arroyo Grande and now lives in Templeton.

“Cary works with mentally and physically challenged people as a career,” said friend and performer Mike McClain. “She’s always finding wheelchairs, walkers, anything she can get and give to help special needs people.”

Now Cary needs help with medical bills as she battles lung cancer, so a few of her friends are putting on a fundraiser for her this Saturday, March 29, at the Oceano Elks Lodge No. 410 from 6 to 10 p.m. There will be a raffle, a blind wine drawing, a no-host bar, tri-tip sandwiches for sale, and four great musical acts, including headline Kenny Lee Lewis, best known as guitarist for the Steve Miller Band.

“Cary’s single and can’t afford to live on disability,” McClain added. “A small group of friends formed a group to help her. We call our motley group ‘Cary’s Angels.’ By the way, the night of the fundraiser just so happens to be Cary’s birthday, too. Wasn’t planned, just a pleasant surprise.”

Lend a hand to a lady who helps others for a living!

If you listen to KPIG 94.9FM, you might be familiar with The Rayburn Brothers, who have three songs off their new album Back to California in rotation. Craig and Keith Rayburn were “raised near the chaparral covered hills of L.A. and now call the redwood canyons and crashing waves of Santa Cruz their home,” according to their press materials. Their brand of California roots rock blends rock, folk, country, reggae, and jazzy blues into songs about love, longing, and pain “in a way that only seasoned songwriters who have experienced the joys and travails of life can express in such heartfelt terms.”

“Go Down Easy,” “Ordinary Love,” and “Jez Dame” have been getting play on KPIG, and the album is filled with great music. All songs feature the effortless harmony of Craig and Keith, as well as singer Eliza James. The band also features long time lead guitar player Nick Heinz, drummer Jim Norris, bassist Dick Tacklind, and keyboard player Kevin Taylor. Think The Eagles, Neil Young, Los Lobos, and Jackson Browne and you’ll have a pretty good idea of their sound and vibe.

Francesca Nemko has always surrounded herself with beauty, whether it’s poetry, art, performance, or jazz music, so I wasn’t a bit surprised when she called to tell me about her newest adventure.

“I recently decided to return to singing after more than a 50-year absence!” she revealed. “I started slowly, locally, one song at a time. Then I took a great leap and booked myself a gig at a Los Angeles club, The Gardenia, where I presented eight songs, together with selections of my poetry. I felt so good about that performance that I decided to put on a show here in SLO, three days after my 77th birthday.”

Join Francesca for an afternoon of jazz-inspired songs and poetry, accompanied by pianist Brett Mitchell and bassist Matthew J. Evans, this Sunday, March 30, from 2 to 4 p.m. in Unity Concert Hall (1490 Southwood Dr.). Tickets are $12. Call 786-4325 for more info.

Eric Henderson is returning to the area to play two SLOfolks shows. You might recall he was invited to Spain to become one of only three people to study privately with the master guitarist Andres Segovia. Willie Nelson, no slouch in the guitar-playing realm, called him “the most incredible guitarist I have heard in years.” Henderson plays Friday, March 28, at 7 p.m. in Coalesce Bookstore (772-2880) and Saturday, March 29, at 7:30 p.m. in Castoro Cellars (238-0725). Both shows cost $20. “Along with selections from my new album Notes, I will perform on various instruments, including nylon-string acoustic, electric, and steel-string acoustic guitars,” said Henderson, who plays a 1974 Jose Ramirez III that is one of a set chosen for Segovia by Jim Sherry of Antigua Casa Sherry Brenner of Madrid.

Songwriters at Play singer-songwriter showcase has something special cooked up for Saturday, March 29, at Steynberg Gallery, when they’ll present a tribute to Pete Seeger (7:30 p.m.; all ages; $10). Expect an evening of Pete’s sing-along ballads and broadsides, such as “Guantanamera,” “Kisses Sweeter Than Wine,” “Where Have All The Flowers Gone,” “Waist Deep in the Big Muddy,” and “If I Had a Hammer,” performed by Frankie Fuchs, Lost Hills, Rob Kimball, Ted Waterhouse, Sus Corez, BanjerDan, Dulcie Taylor, Holly Ann Phillips, Steve Key, and Susan Marie Reeves. Visit songwritersatplay.com to learn about all their showcases this week.