Australian C.W. Stoneking brings his pre-war blues sound to The Siren on Feb. 17

C.W. Stoneking may be be a tall, white, baby-faced Australian with a fondness for dressing like Colonel Sanders, but the man knows his way around American roots music genres usually connected to African American artists.

Blues, largely the 1920s pre-war variety, is certainly pervasive through his sound, but he also mixes in jug band, jump jive, gospel, early rock, country, a little Calypso, and a dash of hokum—songs filled with humor and sexual innuendo. 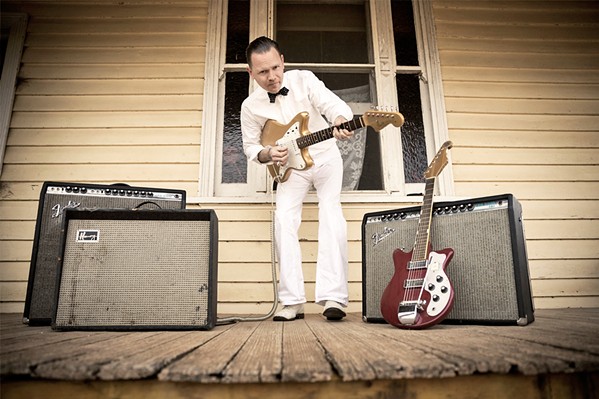 "I studied evil, I can't deny, was a hoodoo charm called a Love Me or Die. Some fingernail, a piece of her dress, apothecary, Devil's behes'. I will relate, the piteous consequence my mistake. Fallin' slave to passin' desire, makin' the dreaded Love Me or Die," he sings in "The Love Me or Die" off his Jungle Blues (2008) album. "Against a jungle primeval green, she had the looks of a beauty queen. No bangles or chain, wearin' broken shoe, seventy-five cent bottle perfume. I said, 'Good mornin,' I tipped my hat. All the while I was cunning like a rat. Smilin' gaily, looked her in the eye, I felt in pocket, the Love Me or Die."

The song goes on to weave the sad tale of the voodoo charm's dark work. Because the girl didn't fall in love with the song's narrator, the Love Me or Die charm killed her dead.

"Standin' in the weeds early next day, I saw the meat wagon rollin' away. I seen Matilda layin' in the back, her old mother wearin' a suit of black. Sound the trumpet, and bang the drum, I wait for me judgment to come," it goes on. "I know her spirit is down beneath, I hear the weepin' and gnashing of the teeth. Flames of Hell licks at my feet. In the shadow of the jungle I feel the heat. Matilda's waiting in Hell for me too, all cause she died from a bad hoodoo."

C.W. Stoneking has only played SLO County once, and he returns this Monday, Feb. 17, for a Numbskull and Good Medicine Presents show at Morro Bay's The Siren (doors at 7 p.m.; 21-and-older; $15 presale at Boo Boo's and eventbrite.com or $17 at the door).

He called New Times from Dallas, where he and his band were arriving for a gig later that evening.

"Sorry, we're just parkin'," Stoneking mumbled into the phone in a thick Australian accent. "We're trying to decipher the multiple instructions on the parkin' meters."

Stoneking's parents are both Americans, making him an American-Australian, so I asked him if his countrymen thought of him as more Australian or American.

"They think of me as an Australian there," he said. "I went to school there and spent many long years hanging out in pubs and stuff, so I get along with the Australian way."

Even though his music is drenched in American idioms, Australians also connect to his sound.

"Yeah, it goes down pretty well. It's blues and various things, so lots of people know blues so it's easy to understand, I guess."

Did he get his interest in American roots music from his parents?

"Maybe a little bit. My dad was really into music and stuff, so we had a lot of it playing around the house, I guess. A lot of the stuff I like now is stuff I heard as a kid, some of my dad's records. When I started digging out blues and that, it was out of his collection where I got my first little bits of it before I started looking for it myself."

Stoneking, now 45, first recorded a self-titled album in 1998, which was followed by a live album—C.W. Stoneking & The Blue Tits—in 1999, but his current sound really jelled in 2005 with the release of King Hokum, which he followed the next year with Mississippi & Piedmont Blues 1927-1941. Two years later, he released his breakthrough album, Jungle Blues, but it took another six years to release Gon' Boogaloo (2014). He's about due for another.

"I'm working on one now. It takes me a while to get my stuff together," he said. "I'm always trying to do something new with each record. I'm bringing it back a little more acoustic than the last record. I don't know yet if I'm going to use horns or get some other string instruments. I've been playing the 12-string guitar a little bit, for something like the last six months, and I'm really getting into that. They'll be lots of blues influences, and I always like writing ballads," he said. "I've also been into the Ethiopian music for awhile, so some of the things I'm working on have a little touch of that in 'em. It's a mix of things."

His performance at The Siren will most likely be like nothing you've ever seen before. When I saw him a few years ago, he became an immediate new favorite. Don't miss him!

Also this week from Numbskull and Good Medicine Presents, see California rockers ALO this Thursday, Feb. 13, at The Siren with Ben Morrison (of Brothers Comatose) (7 p.m.; 21-and-older; $23 at Boo Boo's and eventbrite.com or $25 at the door).

LA-based musician Son Little plays The Siren on Sunday, Feb. 16 (doors at 7 p.m.; 21-and-older; $13 presale at Boo Boo's and eventbrite.com or $15 at the door). Born Aaron Earl Livingston, he's known for his collaborations with The Roots and electronic pioneer RJD2. He also worked on Mavis Staples' acclaimed 2016 release, See That My Grave Is Kept Clean, earning him a Grammy Award. Expect classic soul and old-school R&B with a modern touch. 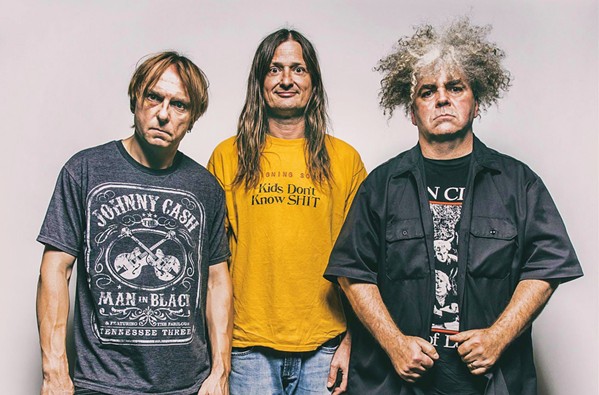 You can get a dose of punk when The Melvins, Hepa.Titus, and Cunts appear at Sweet Springs Saloon on Sunday, Feb. 16 (doors at 7 p.m.; 21-and-older; $20 presale at Boo Boo's and ticketweb.com), as part of the Intensities in Ten Cities tour, whose motto is "Anybody wants to get mellow can turn around and get the fuck outta here." The Melvins deliver what's sometimes described as sludge metal.

Last I checked, there were still tickets for guitar master Al Di Meola on his Past, Present, and Future tour at the Fremont Theater this Thursday, Feb. 13 (doors at 7 p.m.; all ages; $36.69 to $66.02, and $118.80 VIP meet-and-greet at Boo Boo's and fremontslo.com). It looks like he's rolling through with a band, so expect to be wowed by complex rhythmic syncopation in conjunction with a trio of backing musicians. He's worked with Chick Corea, Stanley Clarke, John McLaughlin, and Jean-Luc Ponty. 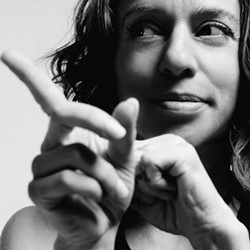 Another Di, Ani DiFranco, plays the Fremont on Sunday, Feb. 16 (doors at 8 p.m.; all ages; $39.04 at fremontslo.com). This one's going to sell out as only tier 3 tickets remained as of Tuesday, Feb. 11. Buy now if you hope to see this feminist icon, Grammy winner, and the mother of the DIY movement who created her own record label in 1990. Percussive acoustic, punk, funk, hip-hop, jazz, soul, electronica—she's mixed it all into her sound over the years. Jesca Hoop will open this show. Her latest album, Stonechild, was named a New York Times Critic's Pick, got great reviews in Pitchfork, The Guardian, NPR's All Songs Considered, CoS, Paste, No Depression, All Music, and Bust.

Heavy metal mariachi band Metalachi returns to town with a show at the Fremont next Thursday, Feb. 20 (doors at 8 p.m.; all ages; $27.31 at Boo Boo's and fremontslo.com).

Reggae acts The Movement, Indubious, and Josh Heinrichs play SLO Brew Rock this Thursday, Feb. 13 (8 p.m.; 18-and-older; $16 at Boo Boo's and slobrew.com). South Carolina might seem like an unlikely place for a reggae band to form, but that's where The Movement got its start 16 years ago before relocating to Philly. They fuse rock, reggae, hip-hop, and acoustic music.

Looking for something to do on VD? Bring a date or find one at the Mother Shuckin' Valentines Day show on Friday, Feb. 14 (7 p.m.; 18-and-older; $10 at slobrew.com; $13 day of show). In addition to the always awesome Mother Cornshuckers, you can also hear Bear Market Riot and Miss Leo & Her Bluegrass Boys. Yee-haw! Ought to be a boot-stomping good time. SLO Brew Rock hosts Badfish—A Tribute to Sublime, with Law and Tropidelic, on Wednesday, Feb. 19 (7:30 p.m.; 18-and-older; $18 at slobrew.com). After the untimely passing of Sublime frontman Brad Nowell, Badfish took on the responsibility of continuing Sublime's energetic and original sound, and they've amassed a major following.

Also, mark your calendar for Polyvision 2020 at SLO Brew Rock on Thursday, Feb. 20 (6 p.m.; 18-and-older; $28 at slobrew.com). The community-centered philanthropic music festival benefits With Us, a national nonprofit headquartered at Cal Poly that organizes the Aware, Awake, Alive program, which generates awareness among young adults and parents on the dangers of alcohol poisoning.

The Arthur White Quintet plays the next Jazz Vespers Concert on Sunday, Feb. 16, in SLO's First Presbyterian Church (4 p.m.; all ages). The quintet will present the world premier of White's composition based on The Prayer of Saint Francis. White, a saxophonist, is a critically acclaimed composer and performer and is the director of Jazz Studies at Cal Poly, who'll be joined by George Stone on piano, Jeff Miley on guitar, Dylan Johnson on bass, and Darrell Voss on drums. The Reverend John D'Elia will provide the meditation.

Santa Barbara psychedelic and funk quintet Killer Kaya plays the Frog and Peach this Sunday, Feb. 16 (10 p.m.; 21-and-older). With Apoorva Chiplunkar on vocals, Zach Rengert on guitar, Eric Engel on guitar, Alex Pavellas on bass, and Justin Kass on drums, this band will transport you to the '60s and remind you of Janis Joplin and Big Brother and The Holding Company and Jefferson Airplane.

LA-based Americana roots rocker Pi Jacobs plays Morro Bay's The Savory Palette on Tuesday, Feb. 18 (6:30 p.m.), appearing in support of her new album Two Truths and a Lie, to be released on Travianna Records on Feb. 21. The record is "rooted in grooves and syncopated beats," according to press materials, and "inspired by the theme song to TV's Justified, which mixes hip-hop percussion and country instrumentation." Δ