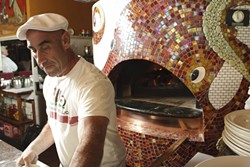 When I relocated from San Francisco to the Central Coast 15 years ago, I was shocked to find this coastal county had so many Italian restaurants. I soon discovered that they all offered the classic cuisine of the region in Italy from whence their family came, which sets each one apart. Among the many things I enjoy about Giuseppe “Joe” DiFronzo’s restaurants is the fact that he supplies many of the freshly harvested ingredients from his home gardens, and that includes his excellent Pinot Grigio, Pinot Noir, and Syrah, labeled DiFronzo.

During a kitchen tour, DiFronzo proudly said, “I’ve had my sponge going 23 years,” as he showed me the dough that was rising for their next batch of pizzas. They take a portion of the mother sponge to start a new batch of dough. And his mother sponge has been kept more than two decades by continually adding to it. “My pizzas are always made with the freshest ingredients: fresh mozzarella and fresh plum tomato sauce. The secret to my Margherita pizza is that I cook fresh basil on the pizza so it caramelizes and releases its oils on the pizza.”

According to the chef, who’s passionate about his coastal Italian heritage: “Italians prefer a freshly baked pizza with only three toppings, like the Margherita, made up of tomato sauce, mozzarella, and basil.” Named for Italy’s Queen Margherita of Savoy (thanks, Wikipedia!), it was created in 1889 by Naples chef Raffaele Esposito. Originally it was thought of strictly as peasant food, but Esposito made it honorable by creating it in the colors of Italy’s flag—red, white, and green—and naming it after the queen. More than 200 years later, it has always been Giuseppe’s No. 1 selling pizza. I thoroughly enjoyed the Margherita ($12) DiFronzo pulled piping hot out of his brand-new pizza oven imported from Italy. The crust was deliciously crisp, and only slightly more bready on the outer edge, which I prefer. It was generously topped with delectable, fresh mozzarella; a sweet-tart tomato sauce; and crispy basil leaves. I could have eaten the whole pizza.

After 23 years of turning out dozens of pizzas to his devoted fans daily, DiFronzo decided it was time to bring in a new wood-burning oven. Once it was imported from Italy, he had to contract a driver with a special forklift to get the 5,800-pound behemoth into the restaurant. That meant removing the double-door entry and the window above it. It was helpful, he admitted, that they don’t open for lunch on weekends.

“We never had to close the restaurant during the remodeling,” he said.

Of course, it wasn’t enough to bring in a new oven; he hired a local artist to make it a one–of-a-kind art piece. The oven was beautifully finished with hand-tiling that depicts seafood typically found in the Bari region of Italy, from which DiFronzo’s family emigrated. The focal point is a giant octopus, its tentacled arms wrapped around the sides and opening of the blazing fruit-wood fire. Humorously, on the backside, a female fish and male fish point the way to the appropriate restrooms.

“When Joe has a vision, he makes it happen,” said his life partner Mica Nightingale. “He’s always thinking of ways to improve his restaurants.”

DiFronzo told me he takes his family to visit their Italian relatives every other year.

Visiting at lunch, we also feasted on a pizza topped with mozzarella, caramelized onion, and gorgonzola, while he spoke of cooking with his relatives in Bari where his family resides. The capital of Puglia, Italy, it’s the country’s largest city after Naples.

“My bread, pizza, pasta, and seafood dishes are all based on my family’s recipes,” DiFronzo pointed out. “When we go back to Italy, I hang out with my family and we cook together. We don’t use recipes; it’s all about feel and taste. It takes time to learn that.”

Following a decadent dessert of gelato and pistachio biscotti with freshly brewed espresso poured over it at the table, we toured the kitchen. I met Ibby, a woman who’s been making all of the fresh stuffed pastas and gnocchi over the past 10 years at Giuseppe’s Pismo Beach. Her spinach gnocchi with ricotta stuffing in a cream sauce with mozzarella and gorgonzola was the best I’ve ever tasted. Across the street at Giuseppe’s Express, I watched one cook making fresh sausages by hand, and then visited the special bakery where the dough was rising for the next batch of pizza. The pastry chef, who makes their desserts from scratch, had delicious-looking fruit tartletts cooling on a rack. DiFronzo told me the gelato is made at Palazzo Giuseppe’s in SLO, and delivered fresh to the Pismo locations.

The old pizza oven will live on; DiFronzo admitted he’s downright sentimental about it. It will be rebuilt on the back of a trailer for Giuseppe’s Catering, which is often at winery events and private parties. He’s also planning to haul it to the Thursday night Farmers Market in SLO, where he will serve fresh, hot pizza by the slice. Whether you’re hoping for a fine dining experience or simply want excellent take-out, you’ll find exceptional quality at Giuseppe’s restaurants and delis.