When Max Brooks was 11 years old, he heard a story that has stuck with him ever since. At the time, a UCLA history grad student was working with Brooks’ parents (filmmaker Mel Brooks and actress Anne Bancroft). After school, he would teach the young Brooks about all the stuff he wasn’t learning in grade school—details about the Falklands War, Hiroshima, and the Holocaust. But there was one lesson that stood, that of the 369th Infantry Regiment, colloquially known as the Harlem Hellfighters.

Organized in 1916, the 369th began as the 15th New York National Guard Regiment, one of the very few African-American units to serve in World War I. For 191 days, longer than any other American unit, these men fought, suffered, and triumphed in the ghastly trenches of France. For years, Brooks tried to option the story of this accomplished-but-forgotten part of American history. He was continually rejected. So, along with illustrator Caanan White, he wrote a graphic novel, titled The Harlem Hellfighters, chronicling the immense struggles and achievements of the 369th. Recently, New Times conducted an interview with Brooks over email about his writing process, research, and how the story of the Harlem Hellfighters illuminates issues of race in America.

Max Brooks Growing up white and privileged in the good part of Los Angeles, that kind of injustice could not have been more alien. I was so fascinated by the notion of people fighting for a government that treated them worse than the Germans. Their story was so contrary to the established narrative of the First World War, or, indeed, any 20th Century war that America has fought. In 1917, Woodrow Wilson said that this war must be fought to make the world safe for democracy, and that justification has been used by every president since. But how could we make the world safe for democracy when democracy wasn’t exactly safe back home? Trying to come to grips with that kind of hypocrisy has kept me going back to this story for decades.

New Times During the research process, what were you surprised to learn?

Brooks I was most surprised to learn about their combat record. Having to combat all of the homegrown racism (and outright government sabotage) would have been enough to turn these men into heroes, but on top of their internal struggles was the fact that they became one of the most decorated units in the entire U.S. Army. More days in combat than ANY other American unit. Never losing a trench, never losing a man to capture. Having the first American of ANY color win the Croix De Guerre. Winning the Croix De Guerre for the entire regiment. Being the first soldiers of any color, of any army, to reach the Rhine River. And, as a side note, introducing jazz to France. Wow. If this unit was white, there’d be a monument to them in every city and town across the country. If this unit had been white, we’d be on our fourth movie adaptation. The sheer size of their accomplishments blew me away the deeper I dug.

New Times What were some of the challenges of adapting the story into a graphic novel specifically?

Brooks Homework! When you write a novel, you only have to include the information you think is important. You don’t need to describe a room, or clothing, or anything you don’t need to. Not so with a comic book. That’s a visual medium. Everything is just out there, so you gotta make sure you get it right! I like to say that, in addition to being the writer, I was also research assistant to the artist, Caanan White. Caanan, by the way, is the real star of this project. He’s the one who brought the Hellfighters to life. He’s the reason that when I speak at schools and give out samples of the book, kids say do their friends “Hey, c’mon, pass that over!”

New Times What do you feel the advantages of using a graphic novel as the medium to tell this story (as opposed to film, nonfiction book, etc.) are?

Brooks I think a graphic novel [has] several advantages over other mediums. Movies cost money, a lot of money. That’s why, in the 1990s, no one wanted my original Harlem Hellfighters screenplay. They looked at this big expensive period war movie starring black people and said, “Ugh, are you kidding?” With a comic book, you can draw one soldier, or you can draw a hundred and it costs the same. Also, as opposed to a prose novel, an illustrated story makes sure that the reader never forgets what color these men are, because these men were never allowed to forget. This is a visual story. It’s literally about how people are treated because of the way they are seen. I think that has a lot more punch when we, the reader, are seeing them. Finally, I chose to make this a dramatic story as opposed to a history text because, let’s face it, a lot of people find history books boring. And I say that as a lover of history! I figured the best way to get people interested in the Hellfighters was to do a fictionalized, dramatized version. Then if anyone wanted to know more, they’d have my bibliography in the back of the book. 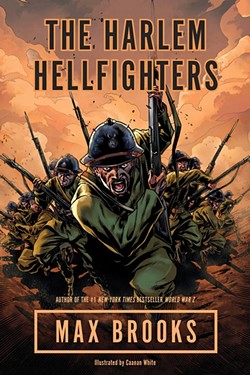 New Times Why do you think this subject isn’t all that widely known? (Sidenote: I majored in American History and not once did I hear about the 369th.)

Brooks I think the story of the Hellfighters is largely unknown for two reasons. First, most people really don’t know about World War I. It’s been so overshadowed by World War II. The second war was bigger, mechanized, and clear cut. It was Lord of the Rings with tanks. I don’t think anyone in this country didn’t grow up seeing a ton of World War II movies. Who’s really seen any about WWI? The second reason, I think, was an intentional effort on the part of the U.S. Government to suppress the memory of these men. This was a time when African Americans were moving to the North in droves, getting jobs, getting educated, organizing newspapers and political movements. That scared the hell out of the white establishment. The last thing they wanted were living breathing examples of what African Americans were capable of. That’s why they tried to sabotage them all throughout the war. And that’s why, after the war, they made sure there wasn’t a lot of attention on them.

New Times How has learning and writing about the 369th changed your view about race relations in America then versus now?

Brooks Most definitely. It’s given me a much more positive look at how far we’ve come as a country. Don’t get me wrong. We still have a LONG way to go. But the journey now is about the hearts and minds of the American people. It’s about erasing racism from our consciousness, instead of our law books, the way it was back then. The level of institutional racism in 1917 still makes my head spin. I still can’t believe that the U.S. Army actually sent a memorandum to the French Army on how to treat black soldiers like second-class citizens! I still can’t believe that the U.S. Army sent the Hellfighters to train in the Deep South two weeks after a horrific race riot AND after the mayor of that Southern town specifically warned of ‘trouble’. I can’t believe that these black men were not allowed to march off to war with the other New York National Guardsmen in the ‘Rainbow Division’ because they were told “Black is not a color of the rainbow.” Yes, it’s infuriating to think about this new Justice Department report about the institutional racism in the Ferguson Police Department, but if this was 1917, that same Justice Department would have probably awarded them a medal.

New Times Just in general, what are the types of stories that grip you and excite you?

Brooks History always excites. It helps me figure out where we’re going if I know a little more about where we have been. I love stories about the underdog, or the unexpected hero. War stories fascinate me because it’s history on fast forward. War accelerates social change to such a point that what might have taken a century, can happen in a matter of years. Think about the world in 1914 versus 1919. Empires disintegrated, monarchies collapsed, communism rose. American women finally had the right to vote, and African Americans became permanent communities in America’s urban landscape. Those kinds of sweeping changes always make for great stories.