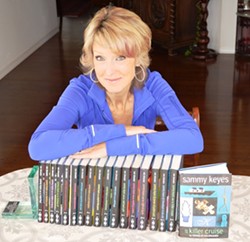 There’s a moment in Sammy Keyes and the Showdown in Sin City when the title character—a junior high schooler with a tendency to get herself into trouble—is flying out of her hometown for the first time in her life. She’s conned her way onto the plane because she’s convinced she needs to get to Las Vegas to thwart her mother’s impending marriage (to Sammy’s own boyfriend’s father, no less), and no responsible adult knows the extent or scope of her plan.

Despite her complicated family situation and the pumping adrenaline that comes with her crazy scheme, she looks out the window and sees a lake—one that she never knew sat so near to her hometown. Her whole perspective changes, literally, as she climbs toward the clouds. The ascent reveals to her the fact that Santa Martina—the series’ equivalent of Santa Maria, with some San Luis Obispo mixed in—may be her whole world, but it’s not the whole world.

For more than 15 years, these books have been a huge part of local author Wendelin Van Draanen’s world. She’s got 32 different titles to her name—so far—and a full 17 of those belong to the Sammy Keyes series, about a sleuthing and skateboarding girl with a mostly absent mother, unknown father, put-upon grandmother, and a now-high-school-freshman boyfriend (whose younger sister is also Sammy’s archenemy). The most recent book, Sammy Keyes and the Killer Cruise, was published in September, and the 18th (and final) Sammy installment is currently being copy edited (“in the comma phase of things,” as Van Draanen put it) and will be available in the fall of 2014.

Coming up on two decades is a long time to spend focused on one fictional person and her friends and family, but Van Draanen has a few secrets for keeping it all fresh.

First—and she didn’t explain this, but I know it about her—she doesn’t let the authoring overwhelm her. She makes time for her real-world family and friends, even managing to run marathons and assemble a band (Risky Whippet) with her husband and two college-aged sons. She also travels extensively, visiting schools to speak about the importance of literacy, health, and pursuing goals.

Second, Sammy isn’t her only subject. Van Draanen has written a stack of other series and standalone novels, some of which have been translated for screens small (TV) and large (Hollywood).

Third, she takes the time to flesh out her characters, from the heroes to the villains to the heroes’ and villains’ families. An 18-book series gives a writer a lot of room to stretch, and Van Draanen does, packing a lot of material into her subplots and side stories. On one level, explorations of motive make the bad guys—like the crabby, bullying Heather Acosta—humans instead of cardboard cutouts. On another level, personality and background details make the writing process itself something enjoyable.

An 18-book series also allows for a lot of tension to build, making revelations—such as the long-awaited identity of Sammy’s father (no spoilers here, you’ll have to read for yourself)—a big payoff for fans. Van Draanen has also seeded ideas in earlier books that are just now bearing fruit, which is great for loyal readers but difficult to do in terms of overall plotting.

Creating a dynamic world that feels real and is still full of mystery requires a bird’s eye view of the story—from an individual book to an overarching plot—much like Sammy’s rise to cruising altitude. Van Draanen’s been up there all along (she knew about the lake), so for her, a necessary change in perspective is coming back down.

“I have a huge advantage over my reader,” she explained. “I get to plot the whole thing out. … It’s almost not fair.”

Killer Cruise is more of a classic mystery story—with a missing person and notes slipped under doors—so she worked to dole out the clues at the right times.

“I try to walk the balancing beam of difficulty and accessibility, I guess, where it doesn’t feel like in the first three chapters you know what’s going on,” Van Draanen said. “If you had suspected [the truth] in the third chapter, that’s not a fun book. ‘I already knew that on page 40?’ That’s completely unsatisfying. On the other hand, I don’t like the whole bait and switch, where everything’s explained on the last five pages of the book.

“The difficulty in writing the mystery is you know everything,” she emphasized. “You’ve written it. It’s your story.”

To help with this challenge, Van Draanen doesn’t hand over a book to her editor chapter by chapter; she waits until she’s got it as perfect as it can be to hit send, so her editor at Knopf can see the whole thing with fresh eyes. If she figures out the mystery by page 90, there’s some rewriting to do.

There’s less such rewriting than usual on the horizon, however, since the last words in Sammy’s story have already been written and edited. Van Draanen is currently planning a book tour for the spring, in which she and her husband—who has a book of his own, Road Rash, coming out in February—will drive around the country together, visiting independent book stores and sharing their own perspectives on writing, perseverance, and success.

With a fictional plane flight and cruise under her belt, and a massive road trip on the horizon, Van Draanen is nonetheless grounded. Or at least she’s trying to be.

“I need to take and soak it in,” she said of her years spent on the Sammy Keyes series. “It’s a really rare thing to be able to point to this and say this was my life. I don’t know how to put it into words. It’s a strange thing. … It’s a really wise thing to actually take a little time and appreciate it.”