805 Beach Breaks in Grover Beach closed briefly on March 28 as Santa Barbara County Sheriff's Office authorities conducted a search of the shop and seized an undisclosed amount of cannabis allegedly sourced from a massive illegal grow in Los Alamos. 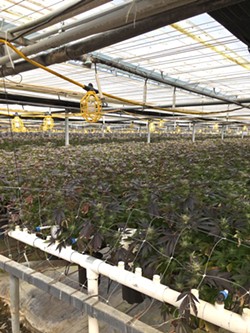 As they executed a search warrant at the South San Luis Obispo County shop, Santa Barbara County law enforcement also seized cannabis from a Los Alamos grow, where hundreds of thousands of plants were purportedly being illegally grown and processed for sale, according to sheriff's officials.

The raids were part of a monthlong, ongoing investigation by the Santa Barbara County Sheriff's Office's Cannabis Compliance Team into the Los Alamos operation, which the agency called the largest that it had ever investigated.

"This case involves the issue of fraudulent licensing and the black-market diversion of cannabis," Santa Barbara Sheriff's Spokesperson Kelly Hoover said over email. "Our investigation from Los Alamos led us to the dispensary to search for evidence and documentation."

The Sheriff's Office declined to release many details about the case, including who owns the Los Alamos grow, where exactly it's located, and what its connections are to 805 Beach Breaks, which was the first brick-and-mortar shop to receive a permit in SLO County.

Hoover said that while deputies found cannabis from the Los Alamos grow for sale at the dispensary, the shop is not the main focus of the investigation.

"[The product] appeared to be labeled to meet the state standards for retail sale," Hoover said.

805 Beach Breaks management did not return requests for comment from New Times.

By the afternoon of March 28, the dispensary had reopened to the public. It remained open as of press time, according to Grover Beach City Manager Matthew Bronson. Following the sheriff's search, which city officials were not provided advanced notice of, the Grover Beach Police Department opened a case of its own to investigate whether the shop violated any local cannabis ordinances.

"Community safety is paramount in how we carry out our ordinance," Bronson told New Times. "Any violations we do find and substantiate will be dealt with in a very appropriate manner."