Automated garden: FarmBot is the future of growing vegetables

The soft whirring sound that accompanies a robotic arm making its way around a raised garden bed is mesmerizing.

When it gets to the exact spot it needs to be—say above the purple-orange head of a beet that’s not quite ready to be picked yet—a shower of water gently squirts out. Water beads down the leafy greens and partially soaks the soil. Then, it mechanically jerks upward and the arm shifts along this rectangular bar; the whole contraption wheels forward along a set of tracks and heads for a tall shoot of kale. 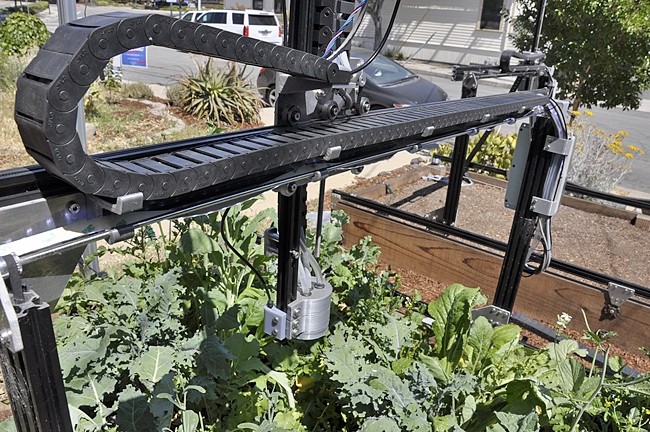 Allow me to introduce you to FarmBot, version 9, which is demonstrating its capabilities on a 90-degree day in a front yard near downtown San Luis Obispo.

Version 10 will be the first FarmBot that hits the open market. That should happen on July 1, according to this gray and black machine’s maker, Rory Aronson, a mechanical engineering graduate from Cal Poly who just won a $10,000 award in the first-ever nationwide InfyMaker Awards contest sponsored by Infosys Foundation USA and announced on June 17, the first day of the National Week of Making.

“I think it’s the future of agriculture,” Aronson said.

The solar-powered FarmBot can plant seeds, water them, apply nutrients, weed the garden, and has sensors that can learn about the soil, temperature, and other environmental-type things. It’s a constantly evolving machine, and something the FarmBot team is constantly trying to make smarter. Aronson’s been working on the project for the last three years with software creators Rick Carlino from Chicago and Tim Evers from Belgium.

“FarmBot is a way to get as local as you can because it’s right in your backyard, you know, a few feet from your kitchen,” Aronson said. “It allows the person to not have to dedicate their whole life to growing food.”

He said it can give home gardeners and/or small-scale farmers more agency over their food, giving people exactly what they want, how they want it to be grown. Plus, the robot can be controlled virtually from anywhere, if you download the software onto your phone.

It’s a concept that Aronson pitched to the internet as he graduated from Cal Poly three years ago. He wrote a 50-page paper about what he wanted to create and why—that “why” includes population growth, climate change, and knowing where your food comes from and how it came to be, among other things—and posted it online, asking who wanted to help him. That’s how Aronson found Carlino and Evers (or, I guess, how they found him), and that’s also how FarmBot research and development got a funding kick start.

A private company gave Aronson $125,000 to help develop the farming robot with the caveat that it had to be open source: Basically, the mechanical design, software codes, and other information are all available to whoever wants to utilize them. You can find all of it at farmbot.io along with a video demonstration of the bot doing its thing in the garden.

It’s led to all sorts of collaboration, Aronson said, including with a company that makes “green” greenhouses and wants to include a made-for-the-greenhouse version of FarmBot in its product line.

The FarmBot kits that people can pre-order starting on July 1 will cost around $2,900, which Aronson acknowledges is pretty pricey, but you have to think about all the work that went into developing the gardening robot.

“As with all new technologies, the first versions are always more expensive,” he said, adding that the goal is to eventually slim that cost down to $1,000 per kit.

Find out more and watch a video by visiting the website at farmbot.io and liking them on Facebook @FarmBotProject.

• The California Department of Food and Agriculture and the SLO County Agricultural Commissioners Office are holding an open meeting at the Ludwick Community Center Assembly Room on June 27 regarding the Asian citrus psyllid and planned treatments in certain SLO city neighborhoods. Stop by 484 Santa Rosa St. with your questions between 5:30 and 7 p.m. or call the Pest Hotline at 800-491-1899.