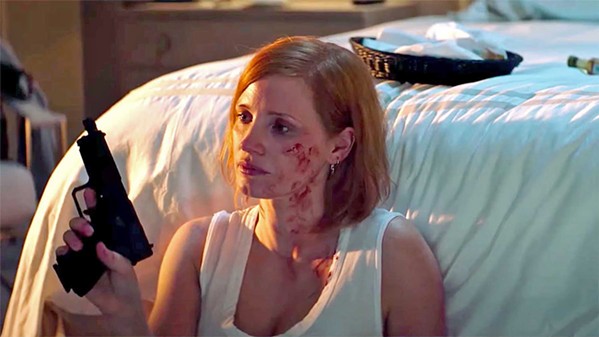 Tate Taylor (The Help, The Girl on the Train, Ma) directs this action thriller about an assassin (Jessica Chastain) who works for a black ops organization that turns on her, forcing her to fight for survival. I guess it was Chastain's turn to throw her hat into the hot assassin ring. Angelina Jolie did it with Wanted (2008) and Salt (2010), Charlize Theron did it with Atomic Blonde (2017), and Jennifer Lawrence did it with Red Sparrow (2018).

The film's got a solid cast. John Malkovich stars as Duke, Ava's handler; Common stars as her ex-boyfriend, Michael, who after Ava disappeared took up with her sister; Geena Davis stars as Ava's mom, Bobbi; and Colin Farrell is Simon, the head of the black ops squad. You'd think with all this talent the film would shine, but nope.

The dialogue—especially between Ava and her mom—is ham-fisted and corny, a lot of the action sequences don't track effectively, and frankly, Chastain doesn't look like she could punch her way out of a paper bag. I had a $1.25-off promo code from Redbox, so the film cost me 59 cents to rent. Seems about fair. (96 min.) Δ