For sheer showmanship, it's hard to beat the Mad Caddies, a rock/reggae/ska/punk act replete with phat horns and a hyperkinetic stage show. The quintet conjures memories of The Clash, The Police, Sublime bands that blurred the line between rock and reggae.

# The Mad Caddies formed a dozen years ago in Solvang, and I know what you're thinking: Solvang seems an unlikely place to spawn a mayhem-core outfit like the Caddies. As legend has it, the band, "having grown tired of the regular sun, sand, and surf routine," locked themselves in a barn and emerged later with Quality Soft Core, their debut record, which punk rock pariah Fat Mike heard, quickly signing the band to his label Fat Wreck Chords.

Over the course of their career, the band's never shied away from experimentation, creating songs in a myriad of genres including Dixieland jazz, surf rock, rockabilly, country, swing, Spanish music, and polka. They even created their own subgenre of music, "pirate-core," when they released Rock The Plank. In fact, the band members sort of think of themselves as pirates: They travel around the world, making port in unfamiliar towns, causing trouble, imbibing spirits, and engaging in random pillaging.

Keep It Going, the band's fifth full-length record recorded under producer Wayne Jobson (No Doubt, Gregory Isaacs, Toots & The Maytals), hit the streets last May and proved itself the definitive example of the Mad Caddies sound. It also boasts reggae legend Duckie Simpson (Black Uhuru), who joined the Mad Caddies to sing on a cover of Delroy Wilson's reggae classic "Riding For a Fall."

The Mad Caddies play Tuesday, July 10, at 8 p.m. in Downtown Brew for an 18-and-older show. Advanced tickets are $12 at Boo Boo's or ticketweb.com. The first opening act is Tomorrow's Last Hero, and the second opening act is my new favorite punk act, Cobra Skulls, fronted by Devin Peralta, who happens to be the son of SLO City Councilperson Christine Mulholland.

Cobra Skulls have been in the studio recording Sitting Army for the Red Scare label. The new full-length CD will be officially released at this show, and I got my hands on an advanced copy and can attest to its utter excellence. Peralta writes all the material, and he has an acerbic wit and an astute eye for pointing out the hypocrisy of right-wingers. There hasn't been a punk act this intelligent since The Dead Kennedys. Even if you're just a mild fan of punk rock, do yourself a favor and don't miss this show.

The other Santana
Bandleader, keyboardist, vocalist, and composer Salvador Santana comes from a pretty good pedigree: His pops is Carlos. Salvador mixes vibrant music and lyrical poetry into conscious hip-hop, jazz, R&B, rock, Latin, and other world idioms, creating a fresh, individual, totally contemporary sound. He likes to call the music he creates with the Salvador Santana Band (SSB) "a new blend, a sound reinvented."

# "It's a mix of all my favorite music, the best of what's impacted my life, all coming together in a new genre," said Salvador, who cites Bob Marley, Thelonius Monk, McCoy Tyner, Jimi Hendrix, Billy Cobham, John Coltrane, Miles Davis, and Atmosphere as influences.

Salvador's music chops are clearly an extension of his family's extraordinary legacy. In addition to his famous dad, his maternal grandfather was African-American blues pioneer, tenor, and guitar legend Saunders King. His paternal grandfather is celebrated violinist and mariachi star Jose Santana. He gets his lyrical skills from his mother, author Deborah Santana.

Salvador also shares a Grammy with his father for the father-son collaboration "El Farol," from Carlos's 1999 album Supernatural. He also covered "A Song For My Father" for a compilation album of young artists doing timeless tracks first made famous by their legendary musical fathers. On collaborating with producer Oliver Lieberman, SSB mate Jose Espinoza (formerly of Ozomatli) and Santana's Andy Vargas, Salvador said, "Rather than totally reinvent the song, I wanted to honor the classic aspect of what my dad did, but update it to 2007. We worked with that vibe, and made it sound like what people listen to today, with a little bit of Black Eyed Peas, Gnarls Barkley, those sounds mixed in. I wanted to take advantage of the new tech side of things, but it's still all about feeling a live band, there's magic going on with that."

No use for an anniversary party
It's kind of hard to believe that No Use For A Name is celebrating its 20th anniversary. The power pop punk act formed way back in 1987 in San Jose, and now it's finally releasing a greatest hits CD called All The Best Songs, which hits record stores on July 10.

# According to their label, "As one of Fat Wreck Chords' flagship bands, we thought it high time to put together a collection of the songs that truly exemplify their body of work. Calling this release a 'greatest hits' seemed a bit pretentious and boring, so after much deliberation a title was constructed that could not only hold its own amongst other NUFAN album titles, but also provides truth in advertising, All The Best Songs. Compiling a track listing was another task in itself, but after some serious soul-searching and countless round robin e-mails with the band, we were able to select 24 of their finest tunes. Thinking that we should up the ante a bit, we've also included two unreleased tracks for a total of 26 songs."

The CD also features photos from throughout the band's storied history, and the mothers of band members Rory Koff and Tony Sly even provide a couple of rants for the liner notes.

Check out No Use For A Name on Monday, July 9, at 8 p.m. in Downtown Brew. This is a 16-and-older show, with $12 advanced tickets (at Boo Boo's and ticketweb.com) or $14 at the door. The Flatliners and Whole Wheat Bread will open.

More music
Don't forget about Jr Toots, who hits Downtown Brew Thursday, July 5 for a stop on his "Crown of Fire" tour. Born in St. Mary's parish in Jamaica, Jr Toots (aka Clayton Hibbert) is son to one of reggae's founding fathers, Toots Hibbert of the Maytals fame. After a childhood spent with his grandparents (his father toured all the time), Jr Toots eventually moved to Kingston, where he was witness to the harsh realities of city survival, which proved influential on his socially conscious music. This 18-and-older show costs $10 in advance (at Boo Boo's or ticketweb.com). 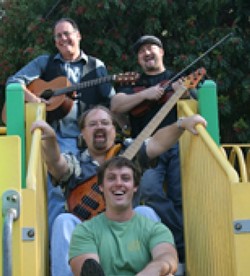 # If Celtic music is more to your liking, master fiddler Jamie Laval and violin/mandolin/cello virtuoso Ashley Broder play the Red Barn Community Music Series in Los Osos Thursday, July 5 (please note this is a Thursday evening, not the Red Barn's normal concert night). The duo mixes bluegrass and Celtic arrangements, with influences ranging from Appalachia to Irish dance to Scottish bagpipe tunes. The show begins at 7 p.m., and a $10 donation is requested at the door.

Last week, SLO Folks took you to a French Cafe when Baguette Quartette played, but this week you're headed to an Irish pub when Sligo Rags plays two shows: Friday, July 6, at Morro Bay's Coalesce Bookstore (7 p.m. $15 tickets call 772-2880 for reservations) and Saturday, July 7, at Atascadero's Green Acres Lavender Farm (7 p.m. $15 tickets call 466-0837 for reservations a catered dinner will be offered at additional cost at 6 p.m.). Sligo Rags always has a few tricks up their sleeves, like their Irish-ified version of "The Devil Went Down to Georgia," which they perform as "The Devil Went Down to Dublin." They've also been known to take on the Jimi Hendrix song "Little Wing." Trivia: The band's name comes from the third verse of the Celtic anthem "The Irish Rover," which says "We had one million bags of the best Sligo Rags."

Monster bassist Dylan Johnson (of Functus) and a few of his friends will provide the music for woO! on Sunday, July 8, at SLO's Monday Club from 10 a.m. until noon, performing powerhouse funk-meets-jazz. For those who don't know, woO! is a weekly dance concert that draws folks interested in exploring free expression through dance. Everybody's welcome, and the event's motto is "Dance like nobody's watching." A free gathering for tea in the garden follows each session. 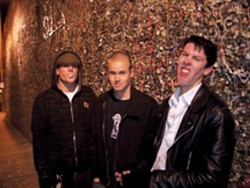 # Matt's Music, Stage & School will present a student showcase on Sunday, July 8, at 4 p.m. at Paso Robles' City Park Gazebo. Bring chairs and a picnic and hear what the aspiring musicians have been working on.

Monteleone's Rock (280 Harbor St., Morro Bay) will offer singer-songwriter showcases every Tuesday from 7 to 10 p.m. The format includes one featured act that plays a 45-minute set in the middle of the show, and six to seven other performers doing three songs apiece. Here's the upcoming schedule through the month: Tuesday, July 10, Bob & Wendy, with Tim Pacheco and Amie Richie July 17, Butch Boswell, with Anthony Roselli July 24, Jill Knight, with Peggy Penny & Rockin' Robin and July 31, Brad Colerick, with Gary Foshee and Cinder Jean. These are all-ages, free events (with a tip jar if you're feeling tipsy).

Numbskull Productions has put together a nice collection of local acts for a show on Wednesday, July 11, at Downtown Brew. Blesk headlines, and according to the band, they've "set out to reveal what is true through our music and love for people. We are here to open hearts and break down walls, to push aside the things that will fade and help find what is real." Also on the bill is Briertone, which combines indie, emo, Southern rock, and bluegrass elements to create a musical style that they refer to as "outlaw rock." Sparrows Gate has three albums to their credit on the indie label Something Sacred Recordings. The rock band lists U2, Tom Petty, Neil Young, Bob Dylan, and Smashing Pumpkins as influences. The show starts at 7 p.m., is all-ages, and costs $8 in advance (at Boo Boo's and ticketweb.com), or $10 at the door.

A quick note
This week's album reviews got lost in the glare of the recent Independence Day celebrations. Check in next week for a treat for your ears.

Glen Starkey blew his sense of humor off, which will teach him to play with illegal fireworks. Send your condolences to gstarkey@newtimesslo.com.