On Sept. 9, the commission approved the permit allowing Port San Luis to begin pier renovations after it turns in the final repair plans. Harbor Facilities Manager Chris Munson said they aim to start repairs early next year, but weather is their biggest obstacle. 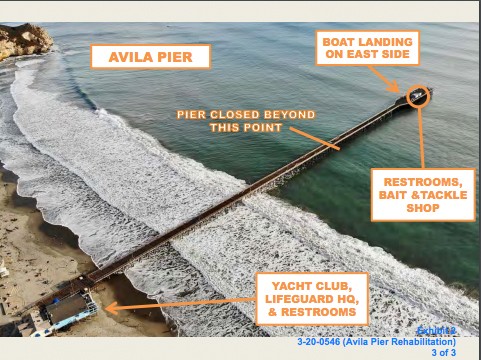 "When work begins in the spring, our hope is that the majority of the work should be completed within 2022, but pier construction is impacted by a number of variables such as storms, tides, swells, and wind; not to mention the material and labor shortages we are currently experiencing," Munson told New Times.

The Avila Beach pier closed in 2015 due to heavy storms and frequent public use. Since then, it's been partially reopened, but much of its sea-facing side is still off-limits.

Earlier this summer, the harbor district received more than half the necessary funds for rehabilitation when the Wildlife Conservation Board awarded $1.25 million to the project. The harbor district also got additional funds from the Coastal Conservancy, the Avila Beach Community Fund, and the Friends of Avila Pier nonprofit. Munson said that they are anticipating $200,000 from a Division of Boating and Waterways grant that would help repair the boat landing section. If it comes through, the port would have almost $2 million in total at their disposal.

"Donation[s] are still very much needed as they will help ensure a more complete rehabilitation, which will extend the life of the pier," Munson said.

Initially, Port San Luis had 10 months to complete the process once they started it. But Interim Harbor Manager John D'Ornellas said that the district received a recent extension that's an informal deadline. The postponement took into account that pier repairs will almost be an ongoing necessity.

"We are going to be constantly repairing the pier. That's the only way to keep it continually open. It's essentially a never-ending project," D'Ornellas said.

Repair experts are taking accessibility for disabled visitors into account too. One way they're aiming to do this is by replacing all of the deck boards on the stem of the pier. This would close the wide gaps that have formed between the existing planks.

"The gaps in the planks were intentional in an attempt to dissipate upward force from winter waves hitting the pier from underneath. When the engineer assessed the pier, they noted that while the gaps might help this a little, they were not necessary. We are also looking to modify the placement of utility lines, which will help clear the path of travel along the railings," Munson said.

The district expects that wildlife activity increased around the closed section of the pier. But Munson said that bird and nesting activity was surprisingly less frequent compared to other closed piers. A biologist will be appointed to survey the area for nesting birds before construction starts.

The rehabilitation team doesn't have a firm deadline on when it will be done. Currently, the harbor district is only operating with its own staff. D'Ornellas said a major contractor would have to step in to speed up the process.