It's been a bumpy ride for the Avila Beach Golf Resort in its most recent attempt to obtain an outdoor entertainment license, and now the popular concert venue is facing another barrier: the California Coastal Commission.

In a Nov. 19 letter to Justin Cooley, the San Luis Obispo County staffer overseeing the resort's application process, Coastal Planner Brian O'Neill said that because some of the resort's property falls within the Coastal Commission's permitting jurisdiction, it will likely need to obtain a coastal development permit (CDP) in order to continue hosting concerts and festivals. 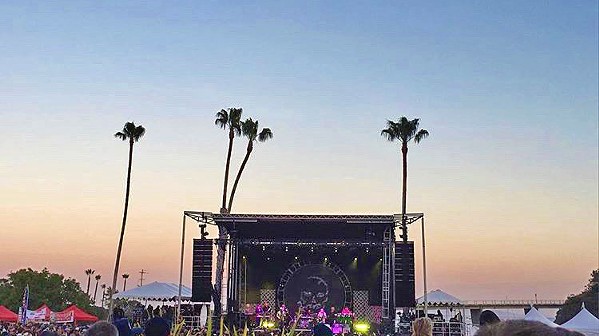 "Our understanding is that similar events have taken place for decades without CDP authorization," the letter reads, "even though commission staff has perviously informed all parties that such events require a CDP."

The Avila Beach Golf Resort filed its most recent application for a temporary commercial outdoor entertainment license with the county this year after county staff received complaints regarding noise and traffic congestion associated with the resort's events, and concerns over the legitimacy of the resort's permits for such events. If approved, the entertainment license would allow the resort to host up to 12 one-day events with 1,000 to 3,000 attendees each year, and five multi-day events with up to 5,000 attendees, effective January 2020.

Although the resort isn't proposing any significant increases in yearly events or volume of customers, Avila Valley Advisory Council members say the resort has been operating its events without the proper permitting for years, and the council voted on Nov. 4 to oppose the application.

O'Neill, the coastal planner who authored the letter to SLO County, said Coastal Commission staff only recently became aware of the issue after several Avila Valley Advisory Council members and other residents reached out regarding the resort's application.

While O'Neill said much of the resort and its facilities are outside the Coastal Commission's jurisdiction, outdoor events typically take place in a grassy field running alongside the San Luis Obispo Creek, and about 30 to 40 percent of that area lies within the commission's jurisdiction. The area's proximity to the creek and associated estuary are another reason a CDP should be required for events at the resort, O'Neill said, because of the potential to impact coastal resources.

Unless an event is free, runs eight hours or less, and is operated by a nonprofit, O'Neill wrote in his letter to SLO County, a CDP is also required by Standard 5 of the San Luis Bay Area Plan, which says that any person or entity seeking to host an event within the Avila Beach urban reserve line must secure a CDP. The resort, he wrote, is within Avila's urban reserve line.

Even if the resort's owners and county disagree with the jurisdiction boundaries or temporary event requirements, O'Neill said Standard 5 says the decision as to whether a CDP should be required would ultimately be left up to the executive director of the Coastal Commission.

But Jon Ansolabehere, chief deputy counsel for SLO County, said Standard 5 is not applicable to events at the resort because the property is not technically located within the town of Avila Beach. The county is still working on an official response to the commission's letter, Ansolabehere said.

Rob Rossi, co-owner of the Avila Beach Golf Resort, agreed, and said he doesn't believe the portion of his property in question is actually located within Coastal Commission jurisdiction or that a CDP is required. On a site visit to the resort about four years ago, Rossi said Coastal Commission staff determined that the property was not in the commission's jurisdiction, and he noted that the resort has been operating events without a CPD—and without issue—for decades.

"So this letter caught us by surprise," Rossi told New Times.

Rossi said he hopes to get this issue resolved as quickly as possible, and several days after receiving the letter, he requested that a SLO County Board of Supervisors hearing on his application for an outdoor entertainment license, which was scheduled for Dec. 17, be postponed for 90 days. In the meantime, Rossi said he plans to meet with Coastal Commission and county staff to discuss the CDP issue.

"Whatever the methodology is," Rossi said, "we're open to pursuing the right approach." Δ