The Avila Beach Golf Resort is again facing opposition from its neighbors, this time for an outdoor entertainment license application the business recently filed that some say is illegitimate. 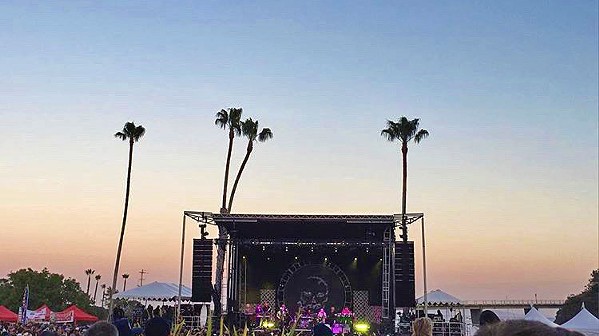 At a meeting on Nov. 4, the Avila Valley Advisory Council voted to object to various portions of the golf resort's application for a temporary commercial outdoor entertainment license, which would allow the resort to host up to 12 one-day events with 1,000 to 3,000 attendees, and five multi-day events with up to 5,000 attendees each year. If approved, the license would become effective in January 2020, would allow both nonprofit and for-profit activities, and would replace the resort's current evergreen license that was approved in 2004 and allows only nonprofit events.

Although the golf resort isn't proposing any significant increases in yearly events or volume of customers, Avila Valley Advisory Council members say the resort has been operating its events without the proper permitting for years, leading to noise complaints, parking issues, and traffic congestion on the town's only road in and out.

"The basic concern is safety," Advisory Councilmember Sherri Danoff told New Times. "There are concerns about traffic congestion, which in the Avila area could be deadly."

The resort's evergreen license from 2004 was unusual, Danoff said, and so is the license the business is applying for now, which falls under County Ordinance Chapter 6.56.

In a letter to the San Luis Obispo County Tax Collector's Office, the Advisory Council wrote that a 6.56 license is typically intended for large, one-time events that would garner more than 3,000 attendees and require special consideration. The golf resort should have to apply for a 6.56 license for each of its five proposed larger events each year, the letter reads, and the 12 smaller events should fall under Title 23, which requires a minor use permit issued by the Department of Planning and Building.

Councilmember Danoff said that while she appreciates the business and talent brought in by the golf resort, it should have to abide by the same rules and regulations that everyone else does, for the sake of safety.

"Over the years, what the Advisory Council has repeated in numerous letters is that it supports events that are properly permitted," Danoff told New Times. "And that's still not on the table."

Rob Rossi, a longtime co-owner of the Avila Beach Golf Resort, said it was SLO County staff who suggested the business obtain a 6.56 license. After receiving complaints about traffic, noise, and concerns over the legitimacy of the venue's permits, Rossi said the county suggested a 6.56 license to refine the golf resort's allowances and requirements.

After several meetings with county staff, Rossi said he and his partners agreed to apply for a 6.56 license "in the spirit of cooperation." The license would hold them to a strict limit of 12 smaller and five larger events each year, which is about what the resort hosts right now.

"What this new permit does is it reaffirms those things so that they are clear and understood," Rossi told New Times. "Hopefully this is just a step in helping quantify and clarify for the benefit of the community."

The golf resort's application will be considered by the SLO County Board of Supervisors in a hearing on Dec. 17. Δ