The Old West is long gone, replaced by strip malls, concentrated feedlot operations, and dressage lessons for dot-com entrepreneurs’ daughters, but that hasn’t stemmed our appetite for tales of the Old West, whether in films like In a Valley of Violence and The Hateful Eight or TV shows like Lonesome Dove and Longmire. We’re still fascinated by the noble cowboy—the survivor whose grit, wiliness, and tenacity help him survive a harsh world. 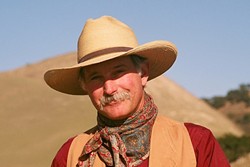 One purveyor of the Western genre is singer-songwriter and raconteur Dave Stamey, who’s had more awards heaped on him than a pack mule. He’s a Will Rogers Award recipient from the Academy of Western Artists. Western Horseman magazine called his recent tune “Vaquero Song” one of the greatest Western songs of all time. He’s been named the Best Living Western Solo Artist by True West magazine three times; the Western Music Association named him Entertainer of the Year six times, Male Performer of the Year six times, and Songwriter of the Year five times; and he was recently inducted into the Western Music Hall of Fame, where he wore a tuxedo complete with Wranglers and a cowboy hat to the ceremony.

Pretty nice for a fella who used to make a buck getting bucked off and stomped by horses, running pack mules, and roping and branding cattle. This Friday, Jan. 6, Stamey will perform at the Coalesce Bookstore (7 p.m.; all ages; $20 tickets available by calling 772-2880 or emailing coalescebookstore@gmail.com). He spoke to New Times via phone.

For many years, Stamey lived in Nipomo, but six years ago he pulled up stakes and headed to “the further northeastern corner of Tulare County,” noting that he couldn’t afford to buy on the Central Coast but ended up with a “nice little piece of horse property” in Tulare.

“We’ve got some old ones [horses] and some new ones, and we’re doing cattle business in a small way just keeping things centered,” Stamey explained. 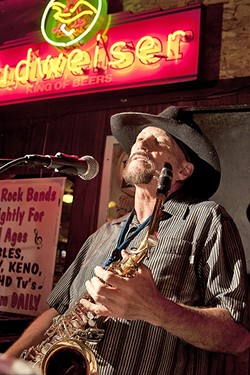 If you take a gander at his website, you’ll see a very full schedule that takes him to performances far and wide, some in fancy theaters and others in small venues. Between touring and his ranch it looks pretty exhausting.

“Yeah, it’s just ugly isn’t it?” Stamey joked. “We do 100 to 150 dates a year, and I’m at the point right now where I don’t know if I want to work that hard, but we’ve been very fortunate to develop a following, and lately we’ve found a new audience in the Midwest—Wisconsin, Michigan, and Iowa.”

Over his career, has the Western music genre been consistently popular or has it waxed and waned?

“I’ve been doing it professionally for 22 years, and while I can’t speak to the industry as a whole, just my little role in it, every year it grows a little bit for me. But you know, I think you have to do it room by room. It’s a matter of creating relationships with areas and groups of people who want to come out and listen when you return, so I feel fortunate to have developed an audience. Western music is more than music, it’s about storytelling, and everyone likes a good story. That’s how we deal with the world, and that’s what we’ve been doing since we were hanging around fires in caves wearing furs.”

“Um, I guess the oddest was an engagement party in Beverly Hills, and I mean in Beverly Hills at a shiny estate. People looked at me like I was the RCA dog. The father of the groom liked what I did and hired me to entertain at the party, and I think he was the only one to get what I do. The people were nice and all in their hipster clothes, but I think what I was doing went right over ’em.”

Because he returns to places year after year, his act must constantly evolve. How does Stamey come up with new material—either stories, jokes, or songs?

“You know, you just kind of do it. I try to write a little bit every day. I’m on the road so much that I write in the car, and I used to write on horseback. I have one of those recorder deals you talk into, so I peck away at it.”

He’s released 12 CDs, most recently a DVD/CD set called Tales From The Tavern: Let Me Sell You A Dream.

“I actually have enough material for another album next year. You keep at it and keep your head down. This is what I do, so I get up and do it. Craig Johnson, who writes the Longmire books and TV stuff, talked about doing the work. He said, ‘I’ve never seen a ditch-digger that went in the ditch with a shovel in his hand and said, “I’m just not feeling the ditch.” You get in the hole and start digging.’ That’s good advice.”

If you’re looking for an engaging evening of story and song, Stamey is the cowboy for you.

The hardest workin’ man in the bar band business

Multi-instrumentalist John Wessel has a lot more energy than I do. He works full time as a psychiatric technician at Atascadero State Hospital, manages to play 100 to 150 gigs a year, and still periodically puts out albums of mostly original material, most recently Just Want to Get to North County Alive, which features nine originals and a handful of select covers such as Donovan’s “Wear Your Love Like Heaven,” Gerry Marsden’s “Ferry Cross the Mersey,” and Larry Parks’ “I Like Bread and Butter.” 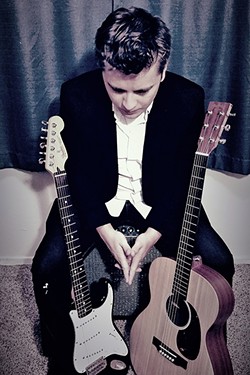 “Ohhhh.” sounds like the work of ’60s psych-rock group Strawberry Alarm Clock, while “Then I Cried” could have been invented in Laurel Canyon in the ’70s.

The album’s title track is a swampy blues story song about a creepy incident on his way home to Paso Robles.

Dan “BanjerDan” Mazer is going to be one busy picker this week, starting with “The BanjerDan Show” at Last Stage West BBQ on Thursday, Jan. 5 (6 p.m.; all ages), where Dan and friends will deliver a whole lotta string music. He’ll play Saturday, Jan. 7, at Paso’s Asuncion Ridge Vineyards Tasting Room (5 p.m.); on Monday, Jan. 9, at Morro Bay’s Tognazzini’s Dockside Too (10:30 a.m.); and on Wednesday, Jan. 11, again at Last Stage West BBQ during their Bluegrass Jam Session & Buffet. This guy put the “work” into working musician.

Café Musique will bring their stirring mix of Gypsy jazz, swing, folk, and wild classical to Cambria’s Pewter Plough Playhouse this Saturday, Jan. 7 (7:30 p.m.), and Sunday, Jan. 8 (3 p.m.; all ages; $25 at 748-3569 or online at bpt.me/2723442). This eclectic band mixes violin, accordion, stand-up bass, guitar, and percussion into a thoroughly engaging sonic stew that will transport you from an intimate Parisian café to a Gypsy campfire and beyond. 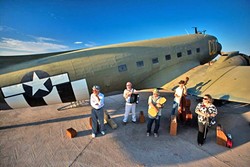