Awkward: Little Theatre's 'The Nerd' pokes at the line between loyalty and sanity

We've all been there. The friend who tells the horrifyingly inappropriate joke and keeps laughing while everyone else falls silent. The brother who comes into town to crash on your couch for a week, but is still there, eating all the cereal, three weeks later. 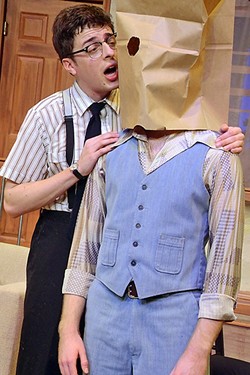 When a debt is owed, whether one of blood or time spent together, the line in the sand for what's acceptable behavior becomes a lot blurrier. That line all but disappears in the San Luis Obispo Little Theatre's retelling of Larry Shue's (also known for The Foreigner) comedy, The Nerd.

On the show's opening night, March 31, audiences were thrown into Willum's (Mike Fiore) seemingly normal enough world. He's an up-and-coming architect with a few good pals, a girl he loves who might be moving away for her career, and another birthday in his 30s. The kink: Years ago, during a brief stint in the Vietnam War, Willum had a near death experience and was saved by a fellow soldier, Rick (Cameron Parker), who he's never met but has kept in touch with over the years. So when Rick shows up to visit out of the blue, Willum is ecstatic to meet Rick and show his gratitude.

But things get weird, fast. Set in 1979 in Terra Haute, Indiana, the whole play takes place in Willum's fairly suburban, bachelor house. Without the benefit of cell phones, Rick shows up to Willum's surprise birthday party wearing a gorilla costume, even though it's almost a week after Halloween. The rest of the party includes the wise-cracking friend and theater critic Axel (Zach Johnson); Tansy, the girl who's about to get away (Kerry DiMaggio); and Willum's kind of awful boss, Waldgrave (Casey Kooyman), along with his super anxious, plate-breaking wife, Clelia (Jacqueline Hildebrand) and their awful, shrieky son, Thor (Dominick Harris). The worlds collide, and it's not so pretty for Willum. After being a super rude dinner guest, Rick demands they play a bizarre game where everyone wears a paper bag on their heads and takes off their socks and shoes, only to end things early due to a major meltdown. 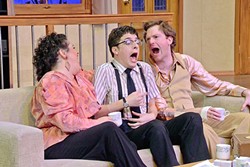 While The Nerd is a comedy, it's also the kind of cringe-worthy awkward where you want to—but can't—look away. Fiore and Parker's tense social dynamic is highly relatable and brings up the poignant question: How much do we really owe anyone when that someone is a giant jerk?

As Rick moves in without an invitation, Willum can't bring himself to kick out the man who saved his life even as it ruins his career and drives his friends away. Finally Axel and Tansy step into to help with a rather creative solution, with Willum's stipulations that Rick can't be hurt or made to feel left out. But in a typical, yet pleasing screwball comedy twist, all is not as it seems with Rick. Consider taking that one person in your life who just doesn't get it to see The Nerd.