Aye, pour me a jug o' scrumpy: Bristols is dry, English-style hard cider with a swashbuckling side

The juice is flying and the gears are running hot at Bristols Hard Cider’s production facility in Atascadero. A group of Sunset SAVOR Adventure Tour thrill seekers pack into a little cinder-block room adjoining the tasting room, where a rainbow of heirloom apples is currently being cleaned, crushed, and pressed before our very eyes.

The sound is powerful; the smell—which hangs heavy in the air like earthy-sweet perfume—is intoxicating. We watch as the red, green, and yellow orbs make their trip from cleaning vessel to conveyor belt to press (the skins are saved for local hogs, who are known to gobble them up with gusto).

Meanwhile, Bristols Cidermaker Adam Welch fills up mini mason jars with fresh, unfiltered juice for us to taste. This is the simplest expression of these organic apples, grown by Trees of Antiquity in Sebastopol, Calif. Cloudy, tangy, and knock-you-on-your-butt sweet, the juice is undoubtedly delicious, but it’s all sugar and no alcohol.

Welch assures us that, in good time, this batch will be cold fermented into dry, sophisticated hard cider, allowing the fruit’s nuanced flavors to truly shine. And he’s right. When finished, Bristols Cider reflects the terroir like a good bottle of pinot noir.

Not only are Bristols’ offerings fermented with native and wild yeasts—they are also routinely dry hopped, aged in old whiskey barrels, or co-fermented with gin botanicals. Like the pirates that bear each cider’s name, these flavors dismiss the status quo with a sly wink.

For example: Bristols’ Barti Ddu is made with
100 percent Granny Smith apples and dry-hopped with Golding, Fuggles, and Belma hops, making for a complex and satisfying beer-lovers sip. If you’re into funky farmhouse flavor, try the Black Beard, made with Arkansas Black apples aged for eight months in old bourbon barrels, which give off a smoky, spicy effect. The cider is then bottle-finished with a blend of 80 percent champagne yeast and 20 percent brettanomyces yeast (yes, the yeast that can wreck a wine. As Welch would say, “One winemaker’s horror is another’s deliciousness!”).

Welch is currently experimenting with cider fermented with local beets and fennel (the beet cider is hot pink, earthy, and will be first come, first served).

“Some people say they only want apple cider plain, but that’s not what we do; we need to play,” said Marci Collins, who owns and operates the business alongside her husband, winemaker/founder Neil Collins, and sister-in-law, Jackie Meisinger.

If you’re new to the whole cider thing, don’t fret: The tasting room, which offers up eight ciders on tap, six in bottle, and growler fills, features a truly laid back vibe. With an old juke box spinning 45s and weekly curry nights, it’s more like a British pub than a stuffy “tasting room.”

Jackie, who grew up with her brother in Bristol, England, is happy to walk newbies through each flavor—and each is different. She’ll likely start you off with a taste of traditional Bristols Original Cider, which is tart, clean, and finishes mostly dry.

It was this traditional, English-style cider that Neil yearned for back in the early ’90s. So, he started making it for friends and, in 2006, began selling it in his Lone Madrone tasting room, then located on Highway 46 West, (the operation recently moved to Adelaida Road).

A lot has changed since then. The cider grew from a side passion project to a viable, flourishing business. The operation produces about 6,200 gallons per year, transforming apples from Paso Robles and beyond into dry hard cider that has more in common with a boutique bottle of wine than your average sugary supermarket swill. Although the cider is thoughtfully crafted, it’s still approachable. 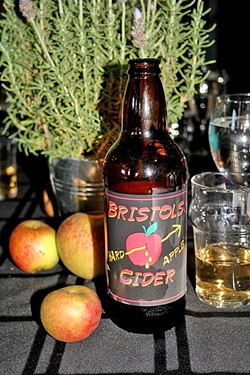 Growing up, Neil and Jackie spent family holidays roaming the Welsh countryside, where cider flows freely and without pretense. Marci distinctly remembers the first time she tried the “scrumpy” farmhouse cider common in those parts. She and Neil were just beginning their romance and, as an American, she was new to the whole idea.

“This farmer rinsed out a few glasses with a hose and asked if we wanted sweet, medium, or dry. We said medium, so he took a bit from two different jugs and said, ‘Here you go.’ It wasn’t fancy, it was scrumpy; with a cloudy color and slight vinegary, tannic taste,” Marci said. “Growing up, Neil was that kid who bought homemade cider from a farm.”

Now, Collins is becoming just as well known for his hard cider as he is for his award-winning winemaking at Lone Madrone and Tablas Creek, where he has worked for more than a decade.

Hard cider has exploded in commercial popularity over the past few years, and the Central Coast boasts its own boutique hard cider scene, including Reef Points (Cayucos), James Brown (Paso Robles), and See Canyon (San Luis Obispo). With Welch at the helm of day-to-day cidermaking tasks at Bristols, the team is bringing its unique, British sensibility to the region.

“Cider revival is popping up everywhere, and we want to spearhead it on the Central Coast,” Welch said. “It’s not just a beverage, it’s history.”

Once upon a time in England, babies were baptized in cider, which was often more pure than water. Workers were given “cider rations,” which they were allowed to drink on the job. Even American founding father John Adams was known to drink a tankard of cider every morning.

Speaking of history, during last month’s adventure tour, our group had the honor of trying a rare sip of Collins’ historic 1996 cider vintage—the one that started it all.

Although Marci and Neil recommend you drink their cider way before the 19-year mark (really, why would you wait?), this relic showed its deep golden color with pride. It tasted like baking spice and Paso Robles sunshine. Cheers to many more years of Bristols—and to making history, one apple at a time.

Hayley Thomas is anticipating her morning tankard of cider at hthomas@newtimesslo.com.