B & The Hive presents their new EP Heart Beat, out Sept. 25

The core of B & The Hive—the popular, hard-touring (Well, formerly! Thanks for nothing, COVID-19), ethereal pop and alt-rock act—is vocalist Brianna Lee and multi-instrumentalist Josh Barrett, who've been writing songs together for almost a decade. Their sound has evolved over the years, but the continuing thread has been feel-good music from the soul.

This Friday, Sept. 25, the Central Coast favorite will release Heart Beat, their new four-song EP, which makes clear why this band (with lead guitarist Eric Novak, keyboardist and backing vocalist Hannah Joy Brooke, and drummer Hayden Gardner) has played many of California's premiere venues and festivals such as the Great American Music Hall, The Mountain Winery, and BottleRock, not to mention our biggest local festivals like Live Oak and Whale Rock.

The EP kicks off with synth- and guitar-driven "Who You Are," which starts out with some old-school ah-ah-ah-ahing before breaking into a head-swaying pop nugget with an earworm chorus you'll be hard pressed to get out of your head.

Next up is the title track, "Heart Beat," which begins with an ear pleasing chord progression before the beat thumps in and propels the song into a swirling guitar track that drifts into dissonance, belying the opening's promise of standard pop and pushing the song into something vastly more interesting sonically speaking. Through it all, lead singer Brianna Lee's voice is a thing of beauty. Think Mazzy Star and you're on the right track.

"Something Real" is a swirling, experimental, and shoegazing rock track. Its trance-like beauty is mesmerizing.

The EP ends with "Give Love," which has a soul vibe running through it. This one will bring people to the dance floor!

You can buy this indie band's new disc on their website, bandthehive.com.

"We are suuuuper stoked to be playing a gig!" Cuesta Ridge drummer Brent Vander Weide wrote in an email. "We'll play the SLO Brew Rock stage broadcast live on Facebook."

This Friday, Sept. 25, from 6 to 8 p.m., you can check out this bluegrass-infused Americana juggernaut, whose shows are more fun than a barrel of beer-drunk string pickers. Or maybe they're the same amount of fun.

"The big news is that we haven't gigged since January, and we have a (kinda) new lineup," Vander Weide added. "First off, Matt Reeder moved to Washington with his lovely wife, so Dylan Johnson (Zongo, Shane Stoneman, The Upside, Functus, Mozaic, his Quartet, and many more) is now the bassist for Cuesta Ridge! Also, thee amazing Allan Dick (fiddle) spontaneously combusted (retired), so we are now a five-piece with Patrick Pearson (guitar), Toan Chau (guitar and banjo), Dan Keller (mandolin), Johnson, and yours truly. We all sing."

Expect great original music, some select covers, stellar musicianship, and awesome vocal harmonies. A virtual tip jar will be available for you to stuff your hot cash injections into.

"I just wanted to add that working musicians (and venues) are greatly in need of community support in these times," Vander Weide noted. "I'm not reliant on gigs (or music in general) but I know many in our community are. That said, Cuesta Ridge will only get paid (money) in tips for this gig, which is nice. But more importantly, we want to share our art with as many people as possible. I guarantee that the biggest payout for us will be having our fans checking in to see us get our groove on!"

Basin Street Regulars have your back

The pandemic hasn't kept Pismo's hot jazz society from continuing their mission to bring you America's greatest musical invention, jazz, on the regular. This Sunday, Sept. 27, you can see Santa Maria ensemble the Riptide Little Big Band at 2 p.m. on the Basin Street Regular's (BSR) Facebook page. After the streaming event, the recording will be posted to YouTube, which will be linked through the BSR website, pismojazz.com. Donations will be accepted during the livestream. 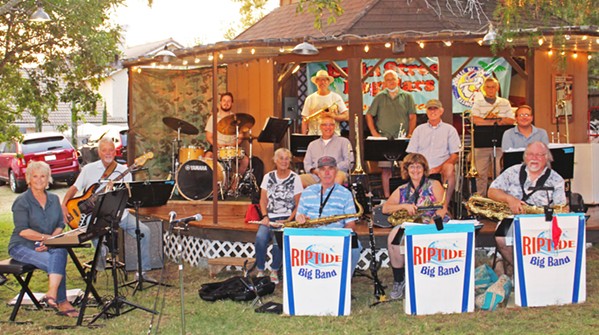 The Riptide Little Big Band "is drawn from local talent in the Central Coast communities to produce music that appeals to dancers and lovers of that big band sound," according to event organizers. "The show will be livestreamed from the Cardinal gazebo."

Expect music from the '20s to the '80s, "anything that is well arranged for a big band instrumentation," the band said. "Our vocalist, Bob Nations, has been featured at many venues on the Central Coast and has been with Riptide since its inception in 2014. Musical director, Judy Lindquist, hails from Reno, Nevada, and taught public school music. She now uses her skills to manage, direct, and perform in Riptide. Talented soloists, great music, awesome vocals, and lots of fun—that's Riptide Little Big Band."

Every year, the Whale Rock Music and Arts Festival raises money for Templeton Instrumental Boosters Association (TIMBA), but this year, alas, no festival.

"Without the festival, they are losing their primary fundraiser for the year," Whale Rock organizers Castoro Cellars noted. "The last two years we all raised over $20,000 each year! In lieu of Whale Rock, limited edition 'Whale Rock Lifer' shirts are on sale now for $25 with 100 percent of the purchase price from each shirt going directly to TIMBA! The shirts will be made to order and will ship sometime in late October. Let's come together like we always do and give back to our community!"

Order yours at castorocellars.com. Δ