City ready to pay $195,000 after police mistakenly arrest a man in his home 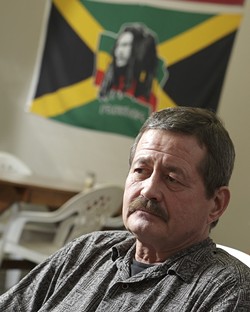 It was an early summer evening—7:30 p.m. or so—and Jeff Milne had just returned home. He kicked off his shoes, his socks, and his shirt, lay into a recliner and cracked a beer. Looking back now, he probably would have kept his clothes on and waited on the beer.

Not long after he settled in, there was a pounding on Milne’s door. Four police officers from the San Luis Obispo and Cal Poly police departments poured into his house. Within minutes they had him in handcuffs and were whisking him to the police station before booking him into the SLO County jail. Dazed by the blitzkrieg of a swarm of cops in his home, Milne was arrested for no other reason than resisting arrest. He spent the night in jail with no shoes, no shirt, and no idea of what had happened.

That was about two and a half years ago. Now that incident could cost the city and state $195,000.

Milne is an unassuming guy who owns Babbo’s Pizza in SLO. He speaks in a low, gravelly voice that seemed oddly fitting to the jeans and matching denim jacket he wore on a recent interview. During that interview, questioned about what he was thinking that night, Milne shrugged his shoulders: “I was wondering, ‘What’s happening?’”

On July 15, 2007, SLO and Cal Poly police officers responded to a possible burglary. The call came after a 10-year-old boy told his mother—who was new to the neighborhood—that a man tried to use a key to get into a nearby house, became angry, and kicked in the door.

Three SLO officers and one from Cal Poly responded: Jeff Koznek, Amy Chastain, Crystal Locarnini, and Max Schad. Though details in accounts differ, basically the scene played out like this: Two officers went to the front door and two around back. There wasn’t any sign of forced entry. Officers saw someone moving inside so they knocked on the door and announced themselves. Milne made contact with the officers and after about five requests, opened the door with his hands in the air, and took a few steps back. The officers patted him down, found a knife, then tackled him (Milne said they pepper-sprayed him first), pepper-sprayed him, cuffed him, brought him to his feet, then pushed on his knees, and searched him and the house.

Milne had alcohol on his breath. He had a knife in one pocket and a loaded .40-caliber pistol in another pocket. Police also found several guns in the house. But police didn’t know any of this until well after the initial scuffle, though they used it against him later in a failed attempt to charge him with resisting arrest. Though he was arrested and prosecuted, Milne essentially did nothing more than drink in his house and possess guns, neither of which were illegal acts, officers admitted in court.

In fact, the police never asked Milne whether he lived at the address. According to Milne and some court records, he told police before they entered, “What’s going on? I live here.” There were also pictures of him and his family throughout the house that police missed.

He told New Times he peeked through his blinds after he heard someone pounding on his door and was immediately faced with a gun and a light in his face. The police were also giving him conflicting orders, he testified in court and told New Times: One yelled at him to keep his hands up, so he did; then another told him to open the door. He was confused.

“So I kind of didn’t know what to do,” Milne said. “Get shot in the face or go over and open the door.”

Ultimately, Milne’s criminal prosecution rested solely on a he-said, she-said basis. Despite the fact that police carry personal recorders and cameras in their cars, no video or audio was captured during the incident. Also, there was no video or audio of Milne’s interrogation at the SLO police station. Officials blamed both curious absences of recordings on various malfunctions, according to court documents.

Milne was acquitted of any wrongdoing.

“He beat the charges despite the fact that there was no audio or video of the incident or the interrogations due to these claimed malfunctions,” Milne’s attorney, Louis Koory, said.

Chief Deputy District Attorney Jerret Gran said resisting arrest is often tacked onto other charges. But, he added, occasionally people are prosecuted for just that one charge.

SLO PD spokesman Ian Parkinson said the recording devices officers wear are fidgety. The devices send signals back to cars and have a limited range, particularly if the signal is obstructed by something. He said he wasn’t intimately familiar with the case and couldn’t speak to the missing interrogation recording.

Soon after his acquittal of criminal charges, Milne filed a claim against the city and the state (because of Cal Poly’s involvement) that included complaints of police negligence, violation of civil rights, assault and battery, excessive force, false arrest, and spoliation of evidence.

City attorneys in August asked the court for a summary judgment (a motion that the case had no merit) but pulled the motion days before the case was scheduled for a hearing in November. The case was since delayed several times and is scheduled to be heard on Jan. 19, 2010. But on Dec. 18, Koory and the city’s counsel Hall, Hieatt & Connely reached a tentative settlement of $195,000.

Koory said the District Attorney’s office could have dropped the original charge, which would have opened the door to a civil claim much earlier: “If they removed that hurdle voluntarily, in other words, if they dropped the charges, then [Milne] would have been able to file right away.”

The settlement still needs approval through a state executive committee board of directors that handles these types of cases, explained attorney Jay Hieatt. Until then, he said, “Any talk about the case will be problematic since technically this is still in litigation. If it falls through we go to trial.”

Sitting in his restaurant, still shrugging his shoulders, Milne said if anything comes out of his case he hopes it’s this: “I just don’t want this to happen to anyone else in this city.”

Staff Writer Colin Rigley can be reached at crigley @newtimesslo.com.