“All right! Elves: if you have any questions, just be sure to ask me or Tara!” 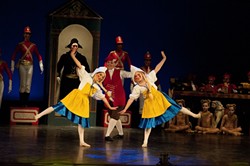 Artistic Director Molly McKiernan’s voice is bright and carries well through the warm and expansive studio that is home to the Coastal Chamber Youth Ballet. Two little girls, clad in black-and-pink leotards, snap to attention at the sound of her voice. They scurry to get in position next to two black prop boxes, while countless other dancers flank the walls, chat quietly, or stretch their legs, awaiting instruction.

McKiernan’s voice carries a sense of urgency and purpose. That’s probably because she’s a mere few weeks away from leading her dancers onstage for Coastal Chamber Youth Ballet’s fifth performance of Babes in Toyland.

Today’s rehearsal will take the dancers through Act One of the piece.

There’s a collective cheer when McKiernan announces that guest dancer Randy Pound, who plays bad-guy Barnaby, is in attendance.

One of Pound’s first tasks is to lift a tiny, curly-haired dancer, no more than 5 years old, onto his shoulders and carry her through an adoring crowd of followers.

McKiernan pauses briefly before cueing the music to remind both Pound and the young dancer just what kind of lifts and spins are required for the scene. The two quickly practice the choreography.

It’s incredible to watch such a diverse array of dancers come together to create something so fluid and whole.

Coastal Chamber Youth Ballet founders Kathy Schultz and Tara Behnke estimate that the cast ranges in age from 5 to 50.

“It’s great to watch them come together like this,” Schultz says. She’s watching the rehearsal from the front of the room, and she occasionally darts off to redirect a dancer.

And really, if this production of Babes in Toyland is about anything, it’s about drawing on a diverse body of work to create something entirely original.

Babes in Toyland originated as an operetta in 1903. It was written by composer Victor Herbert in an attempt to ride the successful coattails of the immensely popular stage musical, Wizard of Oz. It opened at the Chicago Grand Opera House in June and ran for 192 performances.

The operetta spawned a ’50s telecast series, a cartoon film, and a ’70s re-staging.

But perhaps its most famous incarnation is the 1934 Laurel and Hardy film released late that November, sealing its fate as a holiday musical.

The film maintains the same principal characters as the original stage performance, but the plot is almost entirely different.

With so many adaptations and re-imaginings, it would have been easy to pluck a ready-made performance from the pile. But Schultz says there was just too much open landscape to take that avenue.

“We could have gone with something like The Nutcracker, but this just gives us so much more creative license,” Shultz said.

And she’s not exaggerating. Aside from a few key songs and main characters, Coastal Chamber Youth Ballet’s Babes in Toyland is almost entirely the product of the combined efforts of Schultz, Behnke, and McKiernan.

“We couldn’t find the complete, original score; it doesn’t exist anywhere,” Behnke explained. “We were able to get the sheet music for a few songs like March of the Toys … but it was mostly a lot of Internet research and poring over iTunes to find the right music.”

Plus, Babes wasn’t built or billed as a ballet, which left all of the choreography to be designed in-house.

The romantic story at the heart of Coastal Chamber Youth Ballet’s Babes in Toyland remains the same as the 1934 film. Tom and his love Mary have to fight off the advances and deterrents of Barnaby, the miserly, evil, old bachelor of Toyland.

At rehearsal, Hancock student dancer Errol Leon is perfecting his lift with Corrina Gemignani, who plays Mary. Both dancers boast impressive credentials, with Leon traveling during summers to study with different dance programs around the state. Gemignani has been dancing since 2002 (and with CCYB since its inception) and has been a part of numerous troupes and dance groups in the last decade.

When McKiernan switches on the music, the whole mood shifts in the studio. All eyes are trained on Gemignani and Leon as the time before the big lift dwindles. It’s here where you see it again: focus.

It’s a confidence that can only be instilled by believing you’re a part of something great.

There’s a round of applause as Leon sets Gemignani to the ground. The support is palpable in the room; so, too, is the excitement of what’s yet to come.

“That’s the best part of this,” Behnke explains. “[It’s] watching these dancers grow and perform at a higher level each time we do this. I can’t describe how exciting it is to watch them just get better and better each year.”

It’s hard to deny what Behnke says, watching the smaller girls calculate and memorize every move Gemignani makes in the studio’s mirror.

It’s a magical combination of people and talents and drive, and one Behnke feels audiences will enjoy.

“It’s extremely entertaining and original,” Behnke explained, “and we want the audience to feel that.”