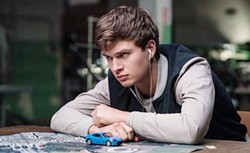 PickWriter-director Edgar Wright (Shaun of the Dead, Hot Fuzz, Scott Pilgrim vs. the World) helms this action crime film about a young, gifted driver (Ansel Elgort) who's coerced into driving for Doc (Kevin Spacey), a criminal mastermind, eventually leading to a doomed heist that will take all Baby's skills to escape from.

Doc never uses the same crew twice, but he always uses Baby, who he's extorting because Baby owes him money after he was caught trying to boost Doc's car. It's the whole "one more job and you're out," thing, but after Baby falls for the waitress Debora (Lily James), she becomes the fulcrum upon which Doc can apply pressure to force Baby to do "one more job," this one for "real money."

Spacey plays Doc with fatherly menace, acting as if he's doing Baby a favor. The various criminals he teams together for the jobs are all different levels of crazy. Griff (Jon Bernthal) is borderline psychotic and immediately hates Baby. The couple Buddy (Jon Hamm) and Darling (Eisa González) are lovebirds in love with each other and with the thrill of the crime. JD (Lanny Joon) is the least defined of the players, but Bats' (Jamie Foxx) shtick is to be the craziest guy in the room.

Elgort's Baby is a really interesting character. He doesn't talk much, but when he does, he sounds like a young Elvis Presley. Debora, a wide-eyed waif, dreams of hitting the road in a car she can't afford, and Baby quickly becomes the man she wants to do it with. There's also Baby's foster father Joseph (CJ Jones), who's deaf. Baby's only interest is protecting Joseph and Debora, so even though he's technically a criminal, we can't help but sympathize since he's being coerced into it and he's a sweetheart among wolves. What makes it fun is that Baby may be young and inexperienced, but he's got something about him that's undeniably competent—much more competent than the scumbags he's working with.