Babylon and beyond: Reggae, roots rock, country, and more are coming to a stage near you

The Babylon Bus Tour is pulling into San Luis Obispo with Stephen Marley at the helm!

Although this man comes from a reggae family, his hip-hop infused dancehall game is strong, and he blends reggae with soul, hip-hop, and electronic beats. 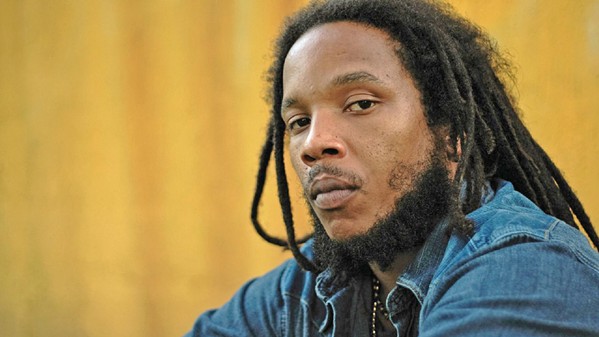 Stephen started his career as a 6-year-old, singing, dancing, and playing percussion with the rest of the little Marley clan in The Melody Makers. Their first single, "Children Playing in the Streets," was—of course—produced by his father Bob Marley and released in 1979.

The eight-time Grammy winning musician and producer founded Ghetto Youths International with his brother Ziggy Marley in 1993 as a way of controlling their own music and helping up-and-coming artists. Stephen spent those early years as a producer, helping his brothers Ziggy and Damian Marley release albums. Stephen released his first solo effort, Mind Control, in 2007, which won a Grammy for Best Reggae Album that year. In 2011, Stephen released his third solo album, The Revelation, Pt. 1: The Root of Life, and his fourth in 2016, Revelation Part II: The Fruit of Life.

Babylon will drop the hip-hop-backed rhythmic reggae mic on Saturday, Sept. 7, when Stephen Marley hits the Fremont Theater stage (doors at 7 p.m.; all ages; $40.21 at Boo Boo's and fremontslo.com). 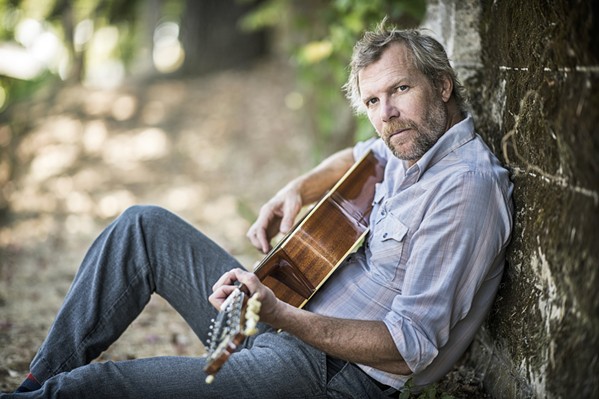 Mother Hips frontman Tim Bluhm plays the Presqu'ile Winery in Santa Maria on Tuesday, Sept. 10 (7 p.m.; 21-and-older; $17.50 presale at Boo Boo's and ticketfly.com or $20 at the door). As the primary guitarist and singer for The Mother Hips, Bluhm's been rocking rootsy tunes on Central Coast stages for a while now. In that time, he's released a slew of his own solo and collaborative projects, toured with Nicki Bluhm and The Gramblers, teamed up with The Grateful Dead's Mickey Hart and Bill Kreutzmann, opened up Mission Bells Studio, and started a music festival in Big Sur called Hipnic.

Bluhm cut a new record of his own at the Cash Cabin in Nashville after a speed-flying (like paragliding, but faster and more dangerous) accident landed him in the hospital.

"It changed my outlook on life, and it changed my whole self-image," Bluhm said in press materials. "It was a humbling thing to be physically incapacitated like that, and it was a reminder of just how fragile we all are. I'm more grateful than ever to be alive right now."

With Dave Schools of Widespread Panic in the producer's chair and a group of music veterans who joined Bluhm to record the album, Sorta Survivin' will be released in 2019. 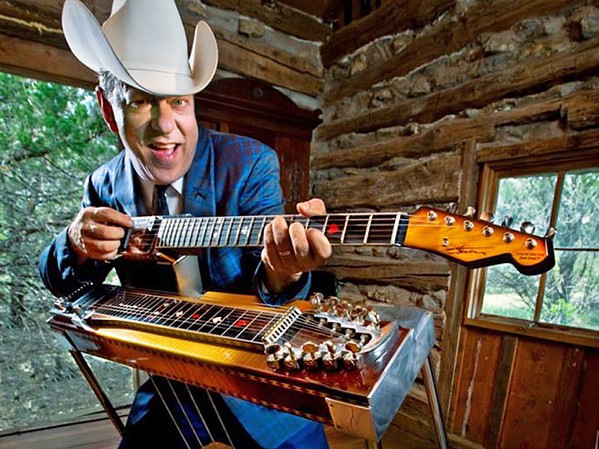 American original Junior Brown is so original, he created his own guitar! Calling it the "guit-steel," the double-necked instrument was built by Michael Stevens of Stevens Electric Instruments. A combination of a standard guitar and a steel guitar, the creation enables Junior to seamlessly switch guitars in the middle of his songs. I've gotta say, that's talent!

Junior is country at heart, and he spent much of the late 1960s and '70s playing small clubs and honky-tonks across the Southwest.

"I did so many years of that, night after night, four sets a night, 15-minute breaks; I mean after that, you've gotta get good or you gotta get out," he said in press materials.

He released his latest album, Deep In the Heart of Me, with Tanya Rae Brown in 2018.

You can't get more heartbreakingly old-school country than "So Close Yet So Far Away": "We survive the storms of life in all kinds of weather/ And we're as close as two sweethearts could be/ But we're a husband and wife who can't be together/ When there's a thousand miles distance between you and me."

You can bounce, hop, and weave a little to the all-Maori reggae band, which "didn't come from privilege, they didn't have famous parents; they were ruff 'n' tumble youths who had their lives changed by reggae music who have grown into humble husbands and fathers still finding joy spreading the love all over the world," according to the bio on Katchafire's website.

On Saturday, Sept. 8, SLO Brew celebrates its 31st anniversary at the SLO Brew Rock Event Center with a party worthy of three decades of being. You can toast to the past, present, and future with specials from the original 1988 Garden Street menu while local favorite Moonshiner Collective plays their last show of the year with Dante Marsh (2 p.m.; $10 at slobrew.com or $15 at the door).

LA rockers and Tom Petty protégés The Shelters play SLO Brew Rock on Wednesday, Sept. 11 (8 p.m.; 18-and-older; $11 at slobrew.com). Formed in 2015, Petty co-produced their self-titled debut record at his Shoreline Studios. The rollicking, '60s-inspired album was was released in 2016. 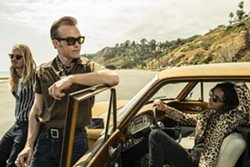 It's safe to say, The Shelters took Petty's October 2017 death pretty hard, and fans have been anxiously awaiting their sophomore album, Jupiter Sidecar, which is scheduled for release on Sept. 20. The Shelters released a single off the album earlier this year, "You're Different," and it's definitely different, but has the same harmonizing rock vocals that characterized them on their first.

Caleb Hawley, Damon Castillo, and Joanna Teters play on Thursday, Sept. 12 (8 p.m.; 18-and-older; $10 at slobrew.com or $12 at the door). The triple-band bill comes jam-packed with soulful, one-of-a-kind beats that SLO Brew Rock is hoping will "curate the finest dance party of the summer."

They're not sure how it happened, but a weekly blues jam that was expected to be a short-term thing is turning 10! The Blues Masters Jam Sessions started in September of 2009 at The Clubhouse, a restaurant in SLO that is no longer. They moved around to different spots over the years and landed at Figueroa Mountain Brewing in Arroyo Grande earlier this year.

"Many of the fans and musicians who have been with us all along have been telling us how much they enjoy the new location, and some very accomplished players have recently started adding to the heat," according to press materials. "We couldn't be happier with our new home."

And they're in the mood to celebrate! Starting at 6:30 p.m. on Wednesday, Sept. 11, the orginal hosts will be fronting the band for the official 10th anniversary show.

Craig Louis Dingman, who has worked with Code Blues and Big Daddy's Blues Band, as well as having his own solo guitar and songwriting career, will be the head honcho, and he'll be joined by original bassist Gary Steinmann. Gary has been working in the SLO music scene since the 1970s. He worked with Al Millan and the Robots, Rancho Deluxe, and if you go far enough into the past, Thunderstrut and Wild Eyed Notion. The host combo will be rounded out by Dean Giles on drums, who works locally with Louie Ortega, Nicole Stromsoe, The Cinders, and many other groups. His résumé even includes gigs and studio sessions with members of Tower Of Power and The Doors.

A constantly changing lineup of musicians will be sitting in with them, and all of the current hosts—including Ted Waterhouse, Andrew Jay Magnussen and Dudlley Dean—are expected to take the stage as well. Cheers to 10 years, and here's to 20!

Allegretto Vineyard Resort in Paso Robles is hosting what it's calling "not the usual wine-and-nibbles event" on Saturday, Sept. 7. Sip and Taste Paso Robles will bring local farmers, chefs, and restaurants together for cooking demonstrations, special pairings, and all of the adult beverages you can dream up.

And "because music is food for the soul," Shane Hall will be there performing his blues, soul, and Americana music. And Kaleo Wassman from reggae dub sensation, Pepper, will join him—most likely shirtless and in a sweet hat, wailing on the mic and the guitar. The event runs from noon to 4 p.m., tickets are between $65 and $100, and available at eventbrite.com. 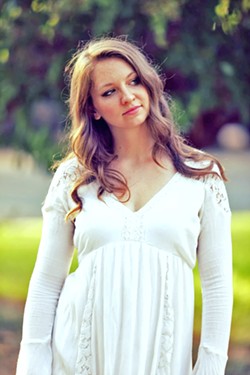 Kentucky-born singer-songwriter Stoll Vaughan brings his "too country for folk" and "too folk for country" sound to Paso's Sculpterra winery on Sunday, Sept. 8; the Morro Bay Wine Cellar on Monday, Sept. 9; and Arroyo Grande's Branch Street Deli on Wednesday, Sept. 11.

Austin-based neo-soul singer Kelly Hafner brings her sultry voice to The Pour House in Paso on Thursday, Sept. 12. Be prepared for a funky-filled night dripping with soul. Δ

Senior staffer Glen Starkey will be back from vacation soon; until then, you have to deal with Editor Camillia Lanham's less-than-fresh takes on the music scene. Send complaints to gstarkey@newtimesslo.com.