Back in: Hello, Dolly! comes to the SLO Rep stage

Hello, Dolly! will show at the SLO Repertory Theatre through June 30. Tickets range from $20 to $39. The musical runs approximately two hours and 30 minutes, including one 15-minute intermission. Visit slorep.org for more information.

If you added a bit more female empowerment and a dash less classism (just a dash less, let's not get crazy) to Pride and Prejudice, throw in a few musical numbers, and switched the setting to New York in the 1890s, you'd get the Tony Award-winning musical, Hello, Dolly!

The 1964 show by Jerry Herman and Michael Stewart (based on Thornton Wilder's novel, The Matchmaker) opened at the San Luis Obispo Repertory Theatre on June 7. "The show also masterfully blends spectacle and story," director Brad Willcuts, a professor of musical theater and dance at Michigan State University, writes in the program. "It teaches us that we really do need one another in this world."

The show's protagonist, Dolly Levi (Hayley Galbraith, a Pacific Conservatory Theatre grad), is a Jill-of-all-trades. She'll teach you to dance, get your ears pierced, or even get your ears unpierced, but Dolly's specialty is really matchmaking. After losing the love of her life and late husband, Dolly hustles for years to make ends meet as a widow, with her array of services (the girl can hustle).

Then under the ruse of setting up one of her clients—the very eligible bachelor and half-a-millionaire, Horace Vandergelder (Leo Cortez, PCPA director of outreach)—with a wealthy heiress, Dolly decides to secretly snatch him for herself. She also expertly helps Vandergelder's hapless niece, Ermengarde (Penny DellaPelle, Our Town, Pride and Prejudice), marry an artist, Ambrose (PCPA grad Paul Chavez), whom she loves but her uncle disapproves of.

Think that's twisted? Well, throw in Horace's plan to propose to another woman (no, not that heiress): widow and hat shop owner Irene Molloy (Amanda Thayer, The Drowsy Chaperone). And then, on a lark, two of Horace's store employees—Cornelius (PCPA grad Trevor March) and Barnaby (Elliot Peters, A Funny Thing Happened On The Way To The Forum)—secretly close the store early to have a day off in New York City. What could go wrong? 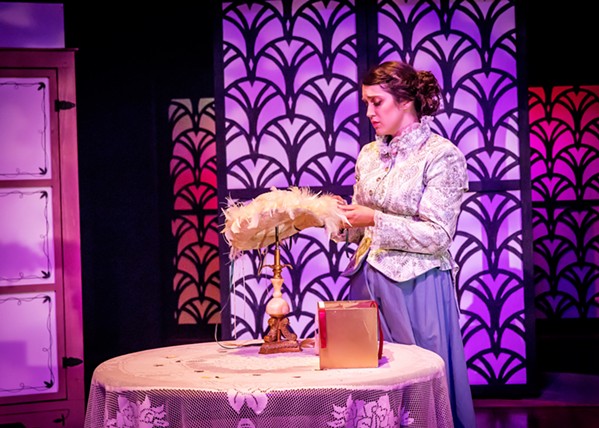 Hello, Dolly! is a madcap, song-filled adventure, but like director Willcuts said, it touches on some deep truths. Both Dolly and Irene are widows who have loved and lost, and have pretty much given up on love the second time around, until fate and luck step in. Both Galbraith and Thayer bring a no-nonsense, get-it-done mentality and a raw vulnerability to their characters, along with some impressive vocal performances (those girls got pipes).

Aside from touching on loneliness and the need for human connection, the play reminds us that sometimes to find happiness, you just have to take a leap and see where you land. "It also asks us to take a chance," the program reads, "hedge a bet on ourselves and grab happiness before the parade passes us by." Δ

Arts Writer Ryah Cooley is singing in the shower. Contact her at rcooley@newtimesslo.com.