Gripping tightly with her knees to stop herself from sliding down the nearly vertical slope, Susi Bernstein slowly works her way across the steep face. Above her in the shimmering heat, a strong young man prevents his own fall by grabbing onto a rope anchored to his truck.

# This isnâ€™t some new extreme sport, although at times it feels like it. Away from the public spotlight, tucked into the rugged mountains southeast of Atascadero, this is the growing business of environmental restoration, now a billion-dollar industry in the U.S.

With little local fanfare, SLO County provides some textbook examples of environmental repair projects, in which scientists and students are using living laboratories to unlock Mother Natureâ€™s secrets for successful restoration. Theyâ€™re planting barren slopes at a working granite mine in Rocky Canyon, recreating beachfront habitat for snowy plovers and redlegged frogs at a former oilfield in the Guadalupe Dunes, and making new ponds for steelhead along San Luis Obispo Creek.

Itâ€™s a complex process that requires diligence, patience, and a willingness to experiment. Whether it involves using a backyard turkey smoker to help germinate native seeds, or growing a special bacteria with an appetite for hydrocarbons, environmental restoration offers deep on-the-job satisfaction.

â€œWhen it works, it makes you want to do a cartwheel! Itâ€™s that satisfying, to be part of repairing things that are damaged,â€? says Bernstein, whoâ€™s gone on to become a professional restoration ecologist after her student stint planting slopes at the Rocky Canyon quarry site. Another former student on the project, Jennifer Langford, was also inspired to pursue a local career as a restoration ecologist.

With grant funding from Union Asphalt for restoration and revegetation at the granite mine, Cal Poly students working under noted biologist Dr. V.L. Holland have been slowly transforming the steep bare slopes into a riot of colorful wildflowers and lush native plants. â€œOur hope is that future generations will be able to visit this site, enjoy the wildlife, plant life, and plant communities, and not know that it was a granite mine at one time,â€? Holland says.

# Itâ€™s a team effort that starts in Cal Polyâ€™s plant conservatory, where seeds of native shrubs, wildflowers, and trees are grown. â€œSome natives are hard to germinate,â€? explains Dr. Matt Ritter, director of the plant conservatory and the author of the book, Plants of San Luis Obispo County.

A chaparral shrub called chemise, for example, was thought to require fire before its tiny seeds would grow. But experimentation over the years has revealed a surprising secret: smoking the little specks of seeds in a turkey smoker can have the desired effect, improving the success of the month-long germination process in trays of moist sand. Five minutes of smoke works better than ten minutes, and chemise wood is the best source of smoke.

Other seeds, such as oak acorns, require cold storage before theyâ€™ll sprout. Lupines are a little easier, coming up after only a week in plant pots covered by plastic bags.

Outside the greenhouses, young native shrubs such as sticky monkey flower and California buckwheat are being â€œhardened offâ€? in bright sunlight before theyâ€™re planted out this fall on the hot, dry slopes at Rocky Canyon.

Restoration efforts rely on the same natural succession as Mother Nature, Holland explains, beginning with pioneer plants such as lupines and deerweed to provide nitrogen, followed by shrubs like buckwheat and black sage.

The first restoration test plot at the Rocky Canyon granite mine was planted by students a dozen years ago. Rising from a base of decomposed granite, a healthy mix of native shrubs and trees is thriving. Bright orange sticky monkey flowers pepper the site, along with some less-common local plants such as soft wooly blue curls, yellow bush poppies, and mountain mahogany. 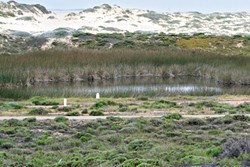 # High above the canyon floor, excavation equipment operates on a mountainside, digging out granite to be used as a road base for North County vineyards and subdivisions, or as a mix for concrete or blacktop asphalt. Under the requirements of the operating permit, once mining is completed the excavated slopes will be replanted with a mosaic of chaparral shrubs.

Biology student Catherine Roy is experimenting with chemise plantings on another steep slope. She scrambles down the hillside to study her test plots. â€œIt was nerve-wracking going in, because I didnâ€™t know if Iâ€™d have any results,â€? she says. â€œBut Iâ€™ve found out that chemise grows best with no competition.â€?

â€œThe College of Union Asphalt,â€? quips Bob Kober, vice president of the company, as he proudly surveys the scene. The granite mine has enough of the rock to meet the North Countyâ€™s needs for 150 years, according to Kober, and all excavated sites will be replanted with native vegetation. With its operations out of the public eye in a canyon that was once the route of Highway 41, â€œitâ€™s a good place to have a mine,â€? he says.

Dr. Holland says that Cal Polyâ€™s ecological restoration program at Rocky Canyon attracts students from around the country, as interest continues to intensify in the growing field. â€œThe students are so enthusiastic. When they end up going on and being successful in the field, you know youâ€™re doing something right as a teacher,â€? he adds.

In the harsh conditions on the rugged barren slopes at Rocky Canyon, former students Bernstein and Langford both discovered a passion for restoration work. â€œIt really gives you a connection to a piece of land,â€? says Bernstein, adding, â€œRestoration is important so we can return the plant communities and the associated habitat for animals, once theyâ€™ve been disturbed. Itâ€™s important because thereâ€™s less and less of the â€˜good stuffâ€™ out there.â€?

Langford has turned her professional attention to restoration work at the former Unocal oilfield, now owned by Chevron, at the Guadalupe dunes on the southwest edge of SLO County. A major clean-up was ordered in 1992, after Unocal pleaded guilty to 23 counts of failing to report spills. A petroleum product called diluent, used to thin the tar-like crude oil so it could be pumped out, had leaked into groundwater from corroded pipelines over the years.

# â€œNobody today thinks that was the proper way to operate an oil field,â€? admits Gonzalo â€œGonzoâ€? Garcia, an environmental scientist who is now the government affairs spokesman for Chevron. â€œBut how do you take an obviously bad situation, and balance the needs for remediation and ecological concerns?â€?

Much of the contaminated sand at the Guadalupe dunes has been excavated, leaving behind gaping holes. Twenty acres of the foredunes have been rebuilt and replanted in the last two years, providing nesting sites for endangered snowy plovers. â€œThe plovers are doing phenomenally well out there,â€? notes Garcia, who, after more than a decade studying the dunes, is proud of the restoration efforts. â€œClearly we were slow to react. But since 1992, weâ€™ve been leading the way in environmental stewardship.â€?

Most of the dunes area will eventually be managed as part of the adjacent U.S. Fish and Wildlife Service refuge, with conservation easements for open space and habitat protection. Redlegged frogs the size of saucers are thriving in the dune wetlands, which will be expanded as part of the restoration project. Garcia adds that quite a few threatened animals and plants are also found in the beachside area. In addition, many more common animals make their home in the dunes, including deer, coyotes, snakes, badgers, foxes, weasels, and kangaroo rats. Invasive weeds such as iceplant and veldt grass have been completely removed from 800 acres of the dunes under the restoration plan, making it easier for native dune plants to survive. â€œWeâ€™ve had huge success with that,â€? he says.

Cal Poly students are playing a role in the restoration efforts at the Guadalupe dunes, experimenting with native plants that can suck up groundwater, and bacteria that help degrade hydrocarbons. Up to 160,000 gallons of diluent are being digested naturally each year, by carbon-eating bacteria that arenâ€™t particular about hydrocarbons.

â€œThe theory is that the more diverse the native habitat, the better the digestion. Cal Poly coined the phrase â€˜eco-remediationâ€™. Weâ€™re studying the bejesus out of it,â€? says Garcia. â€œMost of us in this community are not aware of the incredible ecological gem we have. Most people are oblivious to this incredible gift: 5000 acres of the best dune scrub habitat in California. This dune system is in remarkably good shape. Ironically, because the oil company had it and because of the spill, itâ€™s been protected from the public, with no offroad vehicles and no heavy trampling.â€?

In addition to mandated ecological restoration projects like the ones at the Guadalupe dunes and Rocky Canyon, thereâ€™s a growing movement of voluntary efforts. For example, just north of San Luis Obispo, alongside Highway 101 on land marked by tall burned palm trees, San Luis Obispo Creek now supports steelhead trout for the first time in years after a successful restoration effort.

Brian Stark, executive director of the SLO County Land Conservancy, is the mastermind behind the restoration work on the creek. The Conservancy became involved when landowner Janet Andrews, concerned about erosion along her stretch of the creek near Reservoir Canyon, asked them for help. As a result, 600 feet of eroded banks were graded and
stabilized so the
native trees and shrubs can regrow. A dozen boulders were placed in the creek to create pools where the fish can take refuge.

â€œOur creek has been messed with pretty heavily by people,â€? says Stark. Itâ€™s been straightened out, and the banks are eroding. Our study showed that steelhead are limited by the absence of pools in the creek. The landowner remembers pools full of big steelhead. She saw the glory days of being able to go fishing for your dinner, and she saw it go away too.â€?

The Land Conservancy also spearheads efforts to remove troublesome invasive weeds along creeks and dunes in the county. â€œRestoration is definitely achievable,â€? says the groupâ€™s restoration manager Mark Skinner. I think the public cares, even though itâ€™s not very visible.â€?

Like others involved in the field, Skinner says thereâ€™s a strong emotional component to the work. â€œThereâ€™s definitely a sense of accomplishment. Thereâ€™s a reason for optimism and hope. It makes me want to get up in the morning.â€?

Bernstein agrees, saying, â€œEnvironmental restoration really gives you a connection to a piece of land. Youâ€™re doing something, not just sitting back and wringing your hands. Itâ€™s a beautiful way to spend your life.â€?

For Garcia, the late Kathleen Goddard Jones, renowned as the mother of the Guadalupe/Nipomo dunes, said it all: â€œItâ€™s not about restoration of the dunes. The dunes are about the restoration of your soul.â€? âˆ†

Award-winning journalist Kathy Johnston may be reached at kjohnston@newtimesslo.com.