The Avila Schoolhouse: To B&B or not to B&B?

The Avila Beach Schoolhouse isn’t much of a looker anymore: White paint is peeling and flaking, revealing the scarred wood beneath its façade. Its landscaping consists mainly of construction cones and a portable toilet. 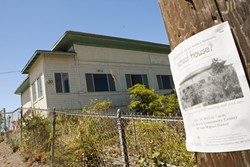 But there are those who remember the glory days of this weatherworn century-old building.

“The opening of the school day was an inspiration,” Marion Richards Woods, born in 1919, wrote in her “Memories of Avila School,” which can be found on the South County Historical Society web site. “It began with the ringing of the bell high in the belfry atop the school. All students lined up quietly at the school entrance. When the teachers gave the signal, the Victrola was wound up and played a rousing (sometimes scratchy) march. Students marched to their room and stood at attention by their desks. Standing tall (slouching was not tolerated), the salute to the flag was repeated by all. After singing ‘My Country Tis of Thee,’ students were seated and classes began.”

Michael Landon, eat your heart out.

Yet the building has sat vacant for about the last 15 years. It was used as a church for a brief time, and a school for developmentally disabled children before that. While the building has been slapped around by the years, it remains on a sweet piece of real estate. Nestled in the hills overlooking Avila, the schoolhouse is just beyond the bustle of beachgoers with a wide view of the San Luis Obispo Bay.

For these very reasons, a local developer is working to redevelop the property. Though the ground beneath the schoolhouse is owned by San Luis Coastal Unified School District, SLO-based Shear Edge Development entered into an agreement with the district to lease the land for 99 years and make annual payments in exchange for the rights to develop.

Part of the original proposal was to tear down the schoolhouse, but locals rallied to save the building under the banner Save Our Schoolhouse—or SOS.

SOS members contend that the building is historic and should be preserved as such, but it took them three consultants to get such a designation. In 2007, the firm Garcia and Associates finally determined the schoolhouse is a historic building and worthy of protection.

While the original proposal to knock out the building is now moot, Shear Edge proposed to carve the property in two, preserving the schoolhouse but converting the remaining land into as many as nine residential units. The housing project has county approval and is moving forward.

“We split the property in half,” said developer Mike Hodge. “We hope to refurbish the schoolhouse to its original architecture.”

The fate of the schoolhouse, however, is still a matter of some contention. Shear Edge proposed converting the building to a bed and breakfast, with the stipulation that it would rebuild the school to its original, early-1900s state—bell in the belfry and all—and set aside space to provide a visual history of the area.

“Right now the building is just pretty run down and sitting there,” Hodge said.

While that’s a step above demolition for members of SOS, members of that group aren’t ready to lay down their arms.

“The developers, SLOCUSD, and the County Planning Commission has [sic] listened to us—but nothing of substance has yet to appear,” member Terry Farris wrote in a letter to New Times. “We would like the school saved—and not used as a bed and breakfast.”

Members are also unhappy how the building has fallen into disrepair. Pete Kelly, a director with the Avila Beach Community Services District and also a member of SOS, said “they haven’t been doing a very good job on that from our perspective,” noting he was speaking in his capacity with SOS.

“You and I could go out there with a six pack and build a little fire and play music if we want to,” he added.

According to Kelly, the group would be OK with a split between B&B and historical site, but they hope to devote more space to promoting the schoolhouse’s and Avila’s collective histories, as well as space to keep files and photographs.

“For them, it’s like we’re going to be their interior decorator,” he said.

It’s still too early to say for sure what the final agreement will be. Hodge said he’s continuing to work with SOS, and he hopes to reach an agreement. If all sides do, in fact, come together, Hodge said he could have an application to patch up the schoolhouse ready to go before county officials in the next three to four months.