Backyard chickens are no bargain!

It’s Sunday, Sept. 28, and I’m working in the backyard when I hear the dogs barking. I look through the sliding glass door and out the picture window and see a pregnant woman holding four chickens walking up the driveway. No, that’s not the beginning of some lame joke.

When my wife told me she ordered chickens, I thought they’d come in a cage or box or something. Nope. Just a double handful of young birds. 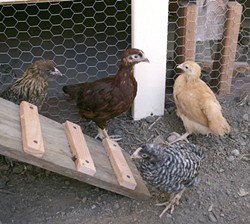 “Yikes! You’re here before I finished the coop!” I say, leading her through the house and into the backyard.

Setting them down in the door-less coop, she says, “They can hang out in here. They’ll be fine.”

I go get my checkbook and make it out to Dare 2 Dream Farms. Four birds—a Plymouth Barred Rock, an Easter Egger, a Buff Orpington, and a Rhode Island Red—hand delivered to our door for $72.

My wife and I had been talking about getting chickens for a while now, and after I did a story about backyard farmers, I became more comfortable with the idea. I visited two SLO houses with backyard coops, and the birds weren’t noisy or smelly, so what the heck? My wife generally buys eggs at the farmers market at $4.50 a dozen. Maybe this will save us some dough and get us some farm fresh eggs, right?

We saw a few chicken coop kits, but they were about $550 and required assembly. Long story short, I figured I could build my own for cheaper, or if not cheaper, at least bigger. The kits were about 3-by-5 feet, and maybe 3 feet high. After looking around the Internet for design ideas, I came up with a plan for a 12-by-4 foot coop attached to the back of an out building, far from our house.

How long could it take? A few days, I figured. I dug postholes and trenched the perimeter so I could bury the wire—that was one day. The concrete and post placement took another. The framing, roof, and roosting box took about six days, and the whole project—working here and there when I had time—stretched over four weeks. If you think you’re going to build a coop over a weekend, you’re handier—and in better shape—than I am. My back, hands, and knees still hurt. I bled four times during the project. 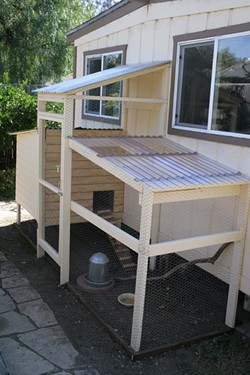 So the chickens are here, and I manage to finish the coop by 5 p.m. Done! My wife and I crack celebratory beers and watch our new chickens peck around the coop, making peeping noises. They’re cute, but in my head, I’m thinking, “I spent just over $600 on materials, another $200 on coop stuff like a feeder, waterer, feed container, and feed. I figure the whole thing will pay for itself after we get 2,400 eggs. I read a good layer can lay about 800 eggs in its five-year lifespan. Four birds times 800 eggs each? We should break even in about four years. Starkey, you are an idiot.”

It’s getting dark, but so far only one of the birds has gone up the ramp into the roost box, only to come right back out again. I go in the coop and lift each bird into the box, but they just scamper down the ramp again. You can’t reason with chickens. We decide to line the nesting boxes at the back of the roost box with shredded paper and put the chickens in from the trapdoor on the back of the box.

We’ve borrowed a baby monitor, so we go in the house to relax after our long day. Then, I notice a chicken has come out of the box. I go out and discover the two smallest birds are huddled on the ground near each other, so Anna picks them up and we put them back in the nesting box. Stupid chickens!

A while later Anna says, “Look,” pointing to the baby monitor, where we see two bright eyes poking around the coop. It’s just one of our cats, but I start to wonder if I buried the wire deep enough.

Dare 2 Dream will deliver chicks, but you’ll need a heat lamp. We got coop-ready birds at 6 to 8 weeks old. They also have pullets if you’re in a rush to get eggs. Ours won’t start laying for another four to five months … maybe not ’til spring. Hmm. Maybe we won’t break even until five years? By then, we’ll need new hens. Well, at least the coop will already be built. Then it’ll be pure profit, chickadee!

As we climb into bed, the baby monitor glowing dimly, Anna says, “We should get a pygmy goat. You could build a pen in the corner of the yard, and it’ll eat all our weeds.”

You can take the girl out of Atascadero, but you can’t take Atascadero out of the girl.