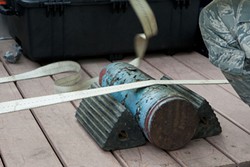 U.S. Air Force Explosive Ordinance Disposal Unit Technical Sgt. Johnathan Homer carried a Zuni five-inch rocket warhead from a residence in San Luis Obispo to his vehicle for transport to Vandenberg Air Force Base on Jan 18. The warhead was developed and tested at China Lake Naval Air Weapons Station between the 1950s and ’80s, according to base officials, and surprised workers who found it buried in the backyard on the 600 block of Hill Street while installing water lines. Homer’s team later determined that the warhead was used for training purposes and did not contain any explosive materials. It had been painted several times, suggesting it was once used as a household decoration, but no one could determine why it was buried.