Glen It's been 25 years since the first Bad Boys, an epic action comedy that was a huge commercial success even while critics panned it as bloated, over-the-top nonsense. It was also Michael Bay's feature-length directorial debut. Eight years later, Bay and producer Bruckheimer were back with Bad Boys II, another commercial blockbuster with even worse reviews. This third installment is more of the same over-the-top nonsense, delivering similar obnoxious fun as the first two, buoyed along by the incredible chemistry between the two leads. Their banter is infectious, and their very different kinds of charisma is engaging as hell. Even though the plot is silly, the action sequences cartoonish, and the entire goings-on pure fantasy, it's still a blast to watch. File this film under, "I'm embarrassed to have liked it." It's irresistibly fun and undeniably dumb, but yes, I liked it! Apparently I'm not alone. It's the best reviewed film of the trio. El Arbi and Fallah's direction is propulsive and crisp, and the dynamic between Burnett, who wants to retire from the force, and Lowrey, who's determined to find out who's killing prominent Miami law enforcement and justice officials and why, is engaging. Their "ride or die" bond, after almost a quarter of a century together, is finally in jeopardy. That dynamic manages to up the emotional ante, insofar as a film like this can muster emotion. Look, compared to all the great films that have come out in the last few months in the run-up to awards season, this is shallow film fare, but if you're longing for the lowbrow bling of the summer blockbuster, this film delivers.

Anna It's a familiar set up: The two "old guys" are headed in different directions—Lowrey desperately clinging to an image of youth with fast cars and Just for Men goatee dye, Burnett celebrating the birth of his first grandchild and settling very happily into retirement. It's silly and fun and a really easy way to eat up an hour and 45 minutes. A whole lot of substance it is not, but not every film has to be cinematic genius, right? The amp up to awards season usually means some pretty heady films, and Bad Boys for Life is the over-the-top nothingness to combat them. Smith and Lawrence are a dynamic duo; they fight like brothers but can't stay mad at each other for too long. Lowrey barely survives being gunned down on the streets of Miami, his rehabilitation happening as Burnett slips sweetly into retirement mode and tries to keep his promise to God to cause no further violence to this world. Good luck, buddy! There are car chases, plunging necklines, witchy foes, and contrived love connections—the secret sauce of action movies! I probably saw the first Bad Boys, but I don't remember it. I know I didn't see the second. Does that matter here? Heck no. A slow-moving rock could catch on to this setup, and the two leads manage to make a good time out of a nothing storyline. Should it be set up for another film? Probably not. Do they do it anyway? Of course they do. 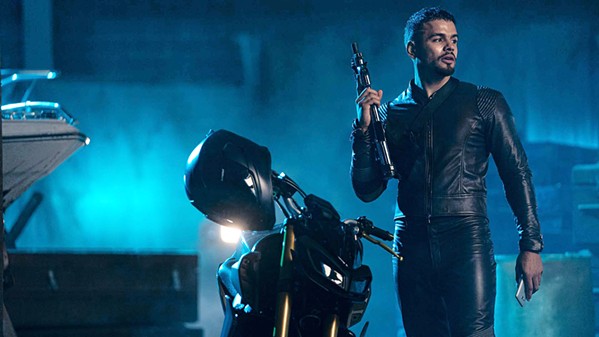 Glen I, too, was surprised they teed up another sequel, but if the money keeps rolling in, why not? The film certainly has fun joking about Lowrey's and Burnett's ages, largely through the AMMO team of Mod Squad-esque youngsters. There's irreverent Rafe (Charles Melton), who thinks Lowrey's past his prime; sassy Kelly (Vanessa Hudgens), who's beautiful and capable; tech wiz Dom (Alexander Ludwig), who's sworn off violence because he's too good at it. They're all led by Rita (Paola Nunez), who used to date Lowrey and still harbors feelings for him. The real plot complication comes from Isabel (Kate del Castillo), Armando's mother, who also shares a past with Lowrey. She's directing her son's revenge mission, and part of the plot's fun is unraveling her and Lowrey's connection. A couple of the first two films' co-stars also return, including Joe Pantoliano as Capt. Howard and Theresa Randle as Burnett's wife. In a nod of respect to the original two films, their director Bay has a cameo as a wedding emcee. It's all fun, and I wish I had more to say about the film, but there's no subtext or layered meaning. What you see is what you get: a $90 million audience-pleasing spectacle with a pumping soundtrack, outsized action sequences, and a couple of megawatt stars who look like they're having a blast collecting another fat paycheck. If that's your jam, get thee to the theater.

Anna When a movie starts with a white-knuckle police chase that ends somehow with no police in sight, you know that making sense may not be the movie's top priority. The fact is, this film is just plain funny—the bickering and antics work between these two leads and the supporting cast keeps the story moving along. The youngsters of AMMO prove to be Lowrey and Burnett's saving grace time and time again, despite Lowrey's reluctance to welcome in the new kids and their technology. Like you said, there isn't a whole lot to say about this movie except that it's exactly what you expect. The good news is it delivers on the laughs and action; just don't expect more than that from this installment of the Bad Boys franchise. Δ