Badass bikes: Titus Olivas crafts custom three-wheelers not for the faint of heart

You may not be able to pick Titus Olivas out of a crowd, but once he puts on his "costume," and hops on his transportation method of choice, it's a different story.

"People look at me and wonder how they know me. Then I put on my hat, and they say, 'You're the guy with the bikes!' Olivas says. 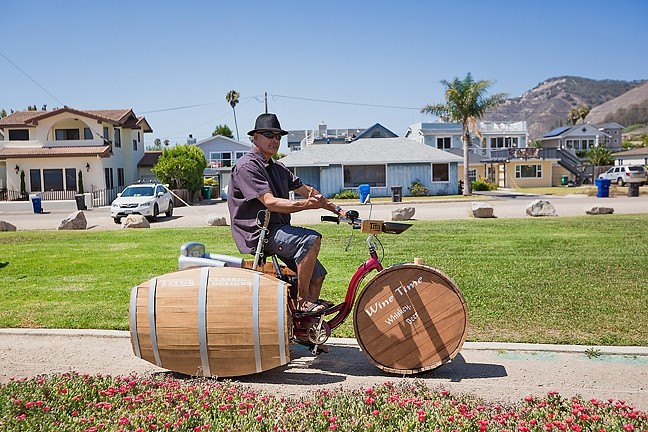 Olivas is known for riding his outrageous three-wheeled creations all over Arroyo Grande, where he's lived for nearly 30 years. Now I see what all the fuss is about. We're standing in the grass at Dinosaur Caves Park in Pismo Beach, and the craftsman's custom bicycles glitter in the sun with blinding brilliance. There's the "heart bike," which looks like something a real-life cupid would ride, fixed with giant red and pink hearts.

There's the "wine bike," with the faux wine barrel and real wine bottle jutting out from the handlebars. There's also a swashbuckling pirate bike, which—of course—is all black and even comes with a cool, antique sword emergency break.

Olivas says he got into customizing the bikes after his friend bought a two-door 1938 Plymouth Coupe. Something about the rounded curves inspired him to create a bicycle with a similar vibe. Never one to shy away from a power tool, he began carving shapes out of metal and fiberglass.

"I got a three-wheeler bike off a neighbor that had moved, and I decided I would build a bike with trunk space in it and a place to put the grandkids on the back," Olivas says, adding that the advertising applications came to him later. Now, each custom bike is fitted with a large flat surface that can be used for any number of things, including daily lunch specials, live music promotion, or even marriage proposals.

Remember the days when you'd hook your AM/FM radio to the front of your bike and crank up the tunes? Olivas has upgraded that experience with Bluetooth capability and speakers. Additions include LED lights, electric pedals (handy for powering up hills), classic bike bells, and extra storage for making deliveries, stashing products, or just storing a picnic.

"My style is very low to the ground, with hardly any bolts showing—very clean," Olivas says. "I love the three-wheeler bikes. If you have a couple of drinks, you won't fall over."

That being said, these babies come with handy cup holders, too (for your iced tea and apple juice, of course). Drinking and biking may be illegal, but the bikes are not. You can ride them wherever you ride normal bikes.

A cabinet-maker by trade, Olivas is also an avid inventor, patenting all sorts of outdoorsy goods throughout the years. Now, his home studio is a graveyard for bikes in various stages of deconstruction. Among the spokes and pedals, you'll find skateboards, surfboards, and a few grandkids wandering around.

"I can't sit still," Olivas says. "My wife will say, 'You're doing another project? Why?' It's just in my heart and in my mind."

While hanging out for an hour talking shop with Olivas, a few people stopped by to check out the flashy bikes. If you don't want to be waved at by passing cars, these rides are seriously not for you. Olivas volunteers at Arroyo Grande High School football games, the school both he and his kids attended. Each game day, you can see Olivas out there pedaling to and from the field. He's used to hearing people yell out words of encouragement and surprise.

What's next? Only the builder knows. He's got a lot of ideas in his head waiting to be forged in metal and fiberglass.

"I come from a long line of artists that could draw a face like you wouldn't believe," Olivas said. "I can't draw; it's all chicken scratch. But I can build it."