Baking obsession: Watching The Great British Bake Off can get under your skin and into your oven

Freshly baked bread hits my nose as soon as I open the door to my house on April 9. It's unusual considering I live alone, worked all day, and then went to class. But my cousin Parisa Amini has been staying with me for the last couple of weeks, and she's become obsessed with baking.

I know why, too, because I've been there. The Great British Bake Off (also known as The Great British Baking Show) got under her skin, into her head, and compelled her to do something about it. Parisa has watched four seasons since she's been at my house, and I'm the one who gets to reap all of the benefits.

In the past week, I've come home to freshly baked banana bread, an apple tart that most definitely did not have a soggy bottom, French rolls, and bread that looks like focaccia but apparently isn't. "It's fougasse," she corrects me.

So instead of snacking on some crappy chips that are in my cupboard, I'm ripping a piece of freshly baked fougasse off one of the loaves she slaved over today.

"You should have smelled it when it was cooking," she says. "But oh well."

Her apple tart was divine. My younger cousin knows a lot about baking—pies, especially.

She walked me through the tips she's got tucked away in her mind for making a nice flaky pie crust, which is butter, flour, and water (sometimes a pinch of sugar and/or salt, too). Everything has to be cold. Some people freeze butter and then grate it, because if the butter is too warm, it will seep out of the dough as it's baking. Then, you won't get that flaky texture.

"Duly noted," I think. "That's why my quiche had a soggy bottom." 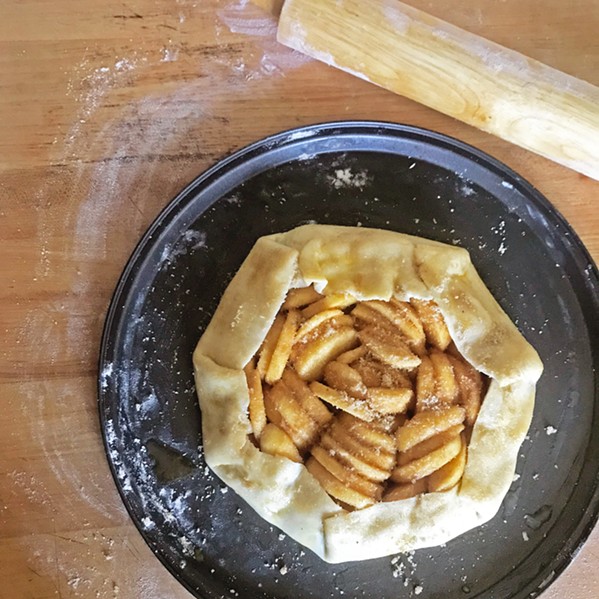 I also went on a bit of a baking spree during my obsession with the Great British Bake Off about a year ago. And while Parisa seems to be nailing her bakes, I was mediocre at best.

Those of you who have felt the pull of the Great British Bake Off are probably with me, but the rest of you might be wondering what the hell I'm talking about. So I'll give you a quick explainer: The Brits created a fabulous show all about baking—tarts, pies, cakes, breads, biscuits, rolls, amuse-bouche, merengue, petit fours, the list is endless, honestly (and it's a little hard to believe). It's a reality TV show that starred celebrity British bakers Paul Hollywood and Mary Berry in the first few seasons (Prue Leith is now Hollywood's co-host) where amateur bakers from around the U.K. face off in a series of challenges until they get kicked off the show, one-by-one.

"Everyone is so encouraging of everyone else on that show, and it's just so nice to see that," Parisa says. "A lot of American reality shows are about creating villains and watching people argue. It's just such a wholesome show. And you learn a lot."

The contestants go through a signature bake, a technical challenge (this is the hardest as the contestants are given a bare-bones recipe and asked to follow it to time), and a showstopper on each episode. 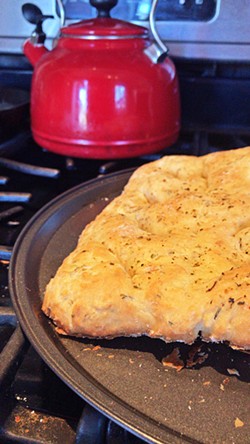 It's awesome. The fougasse that she baked? It's a technical challenge from season 4, episode 6: "Botanical." She found Hollywood's recipe online—it's available on both the BBC and PBS websites—and decided to try it for herself. It's an herbaceous bread that in my defense has an aura of focaccia about it. But it's not Italian, it's French. And it doesn't have that fluffy, spongy texture that focaccia is famous for.

"That bread just sounded so good. ... And it's delicious," she says. "I have to say that Paul Hollywood wouldn't be proud, and I definitely wouldn't get the Hollywood handshake, but I don't think I would be last on the technical challenge. And isn't that the goal?"

There's something about watching people bake a bunch of stuff to a timer that's invigorating and inspiring. Seeing amateur bakers mature and grow kind of gives you the feeling that you can do what they're doing. Parisa actually re-watched the episode as she was baking the fougasse to make sure that it looked like what the contestants were baking because she wasn't sure that her dough was the right consistency.

"Look at their dough," she tells me as we watch it yet again. "See how it's sticky and pliable? Mine didn't do that."

It also was supposed to crackle a little when you rip a piece off, which she assured me that she tested when it came out of the oven. Although pies are her thing, she says, this adventure into bread-making has definitely challenged her. Bread is complicated because it has to rest, or "proof," which gives the yeast you add to the dough a chance to do its thing. The dough has to be worked to the perfect consistency, be proofed for the perfect amount of time, get shaped in the perfect way, and then allowed to proof again.

"I would like to try it again, though," she says with a laugh. "I'm determined to make it properly."

Editor Camillia Lanham is living off the labor of someone else's bake. Send your thoughts to clanham@newtimesslo.com.