In contrast to the infighting of the past, the Atascadero City Council gets along swimmingly these days. There's little to no sense of discord in public meetings. The mood is even peppy at times. Most votes are unanimous.

Some attribute that different tone to Mayor Tom O’Malley’s leadership. When O’Malley was elected mayor in 2014, he said that he made finding a council consensus a priority.

“There are two extremes that have always fought for power in our community: the extreme left and the extreme right,” O’Malley said. “There’s a balancing act between the two that I’ve always dealt with. I’m looking at trying to have everyone win.”

Despite that sentiment, not everyone in town believes it’s working. While O’Malley described his leadership style as consensus-building, fellow Councilmember Bob Kelley chose the term “political machine” to describe the current council. What O’Malley calls a balancing act, others read as a euphemism for gaining control.

O’Malley is up for re-election again this November, running against first-time candidate 37-year-old Nic Mattson and former City Council candidate Ann Ketcherside. As the Atascadero mayoral race heats up, it’s unearthed some tough questions about O’Malley, his ethics on the dais, and the direction of the city.

O’Malley enjoys a broad array of endorsements for re-election, including the majority of the current Atascadero City Council, SLO County officials like Supervisor Debbie Arnold, and state representatives Bill Monning and Katcho Achadjian. 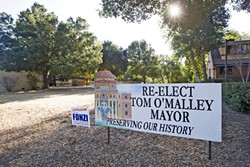 “I think it’s time for a change,” said Kelley, a two-term City Council member who opted not to run for re-election this November. “It’s time to bring in other people from the community and get them represented on a fairer basis.”

In a press release, the former mayors talk about how Mattson will be able to connect with a broader swath of the community and serve as a leader for the new generation of Atascadero residents.

But behind the scenes, some of those mayors also raise ethical questions about O’Malley, pointing to a history of correspondence with the Fair Political Practices Commission (FPPC).

Since he started on the City Council in 2002, O’Malley has intermittently sought advice from the FPPC about potential conflicts of interests.

In 2004, O’Malley owned property just a few hundred feet away from City Hall at 5901 East Mall. A legal land dispute near what’s now the Galaxy Theater involving the city and the school district split the City Council 2-2, and O’Malley had to continually step down from the dais since the issue affected an area too close to his property. The dispute dragged on until O’Malley contacted the FPPC.

In July 2004, he asked the commission if he could eliminate the conflict and be allowed to vote if he gave the property to his adult son.

“It was the only scenario where there was no benefit to me and that would allow me to vote,” O’Malley said.

After the settlement cleared, O’Malley continued to vote on issues that affected the property, a decision that to this day draws criticism, since City Hall and Sunken Gardens have received millions of dollars’ worth of improvements that boosted his son’s property’s value.

“There’s a difference between being legal and being ethical,” Kelley said. “I think it would have been the proper thing for Tom to have recused himself from those votes.”

O’Malley contends that because the FPPC officially ruled that the property is no longer a conflict of interest, stepping down from the dais now would leave him legally vulnerable, as he would be, essentially, acknowledging a conflict.

“I’ve had six different lawyers advise me on this,” he said. “It’s a catch-22 situation.”

While his son’s property tax bill is sent to the mayor’s address, O’Malley said, “I don’t sign anything. I don’t touch it. He pays the taxes on it.”

City Councilmember Heather Moreno called it “unfortunate” that the issue keeps coming up. “The FPPC has weighed in on this and ruled that there is no conflict,” she said.

The other ethical questions with O’Malley concern his role in promoting tourism in the city while also operating the Portola Inn, a bed and breakfast and wedding venue in Atascadero.

O’Malley serves on the board of the Atascadero Tourism Business Improvement District, an agency formed in 2013 that uses income from the hospitality industry to promote tourism in the city. O’Malley doesn’t vote on City Council decisions relating to the district, but his detractors point out the appearance of a conflict and that his inn is advertised on the city’s website.

The mayor claimed that the Portola Inn doesn’t benefit from the city’s efforts since it’s in a residential part of town and he attracts guests and events through other online platforms.

Permissions the city has granted to the Portola Inn also draw ire.

In 2010, the Atascadero Planning Commission approved a bed and breakfast conditional use permit for the Portola Inn without placing restrictions on the number of events it could host.

City code allows residential properties a maximum of 12 temporary events per year and the conditional use permit would allow for “additional accessory events” on top of that—but city staff didn’t recommend placing a limit on the number of events the Portola Inn could host.

According to the minutes of the meeting, Commissioner Dennis Schmidt raised concerns about that.

“Schmidt is concerned about our perception of approving this for such a high-profile member of the community if we don’t apply some limitations on this,” the minutes read. “The next person coming in could get restrictions, and we could have a problem.”

Mattson, O’Malley’s challenger, didn’t shy away from addressing the conflicts when asked about them.

“When you look at the people who have become tired with current leadership, I believe a lot of it is about him using his position in a way that has at least an appearance of benefiting himself,” Mattson said. “It rubs people the wrong way when you’re in the seat of service.”

O’Malley isn’t too concerned with the critics. He said he’s heard it all before as part of Atascadero’s acrimonious political history.

“This isn’t new,” he said. “It’s the same people bringing up the same issues.”

While elections tend to stir up dirt and controversy, the two front runners for mayor prefer to talk about their visions for the city.

If O’Malley’s re-elected, he said it would be his last term on the council. In the next two years, he wants to help the city define its water basin to secure local control of it; find ways to fix the jobs, housing, and shopping imbalance; continue to boost regional tourism; and make Atascadero more attractive to businesses.

Mattson is the sports editor of the Atascadero News and on the board of local nonprofits, including the Atascadero Greyhound Foundation. As mayor, he said he’d focus on an economic plan to boost job growth, attract technology companies, and focus less on the tourism efforts.

“Tourism has a place here, but we can’t put all our eggs in that basket,” Mattson said. “In order for retail and tourism to work successfully, we need jobs to bring balance to the economy.”