Balancing out: Find a little peace amid the chaos along the Pacific Ocean 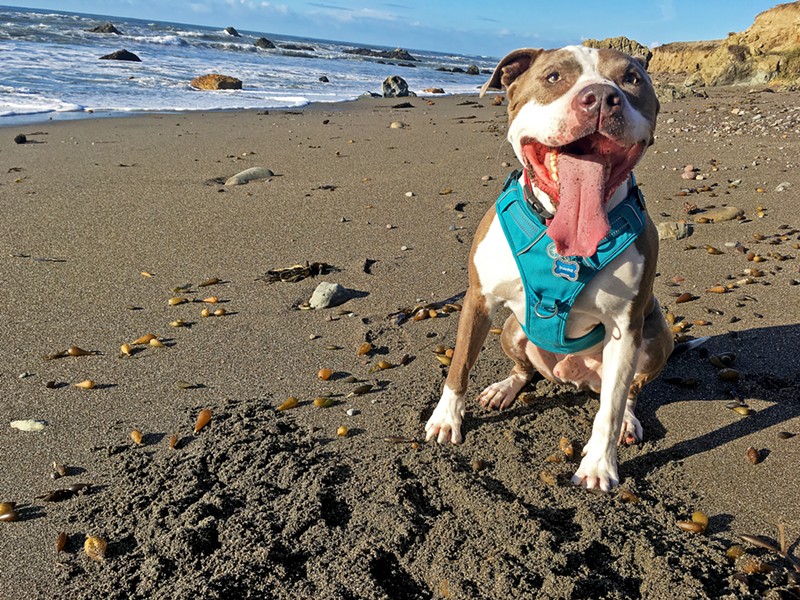 Photo By Camillia Lanham HAPPY PUPPY My dog's outer joy reflects my inner peace on the beach in Cayucos. Photo By Camillia Lanham COASTAL BLISS After a few days of rain, the Estero Bluffs are peaceful and warm on the first Saturday in December.

Photo By Camillia Lanham SHIPWRECKED This commercial fishing vessel went aground in July 2017. It's still hanging out on the rocks. 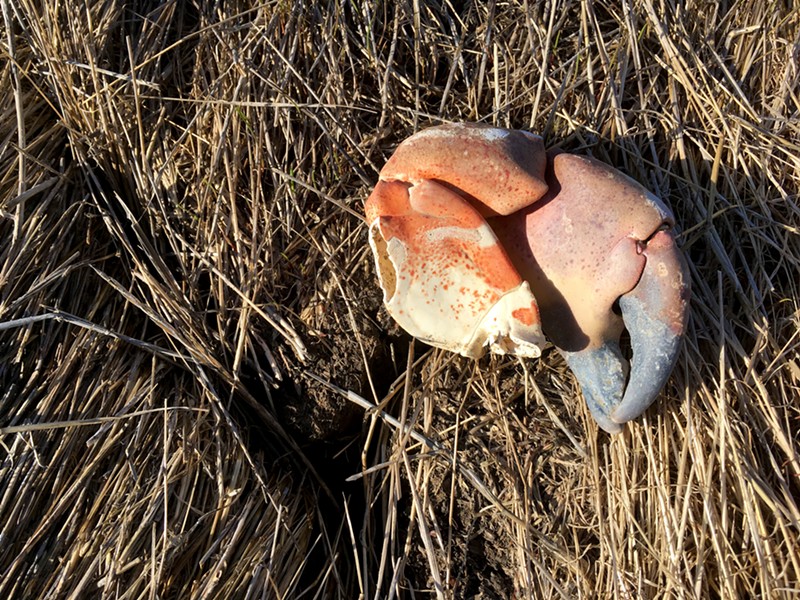 Photo By Camillia Lanham LEFTOVERS? A crab claw that looks like it dropped from the sky to land just so sits on the bluffs above the Pacific Ocean.

The commercial fishing boat that's stuck between the rocks in Cayucos used to have a pirate's flag on the mast and a skull with crossbones tagged above the helm. Since July 2017, it's slowly succumbed to the waves that batter it on a daily basis. A year and a half ago, it was a bit less ghost-like.

Drips of rusted metal run down its hull. Corroded metal frames the windows that stare out from the helm, a forlorn gaze toward the ocean it no longer travels. The tide is in on this first Saturday morning in December and is still a little bit angry from the storms. Like a bath toy being forced under, the vessel is cocked at a weird angle—perched on the rocks as it always is. After being doused by rain for days, it just looks like it's giving up.

The sun gently warms the wind that's blowing along the bluffs just north of Cayucos. My face turns to the sun as if it's a flower drinking in the vitamin of warmth. It's beautiful. Blue ocean, blue sky, the line of bluffs that undulate in and out of the water with sandy, pebbled stretches between. Green is just starting to poke through the brown along the path that heads north.

I should be raking leaves, doing research for my final projects (I decided that I needed to get a masters' degree for some reason), flipping through the stack of alt-weekly newspapers on my kitchen table, mopping my muddy paw print-patterned kitchen floor. The list ticks off as I pad along the softened water-soaked ground, staring at the cracks that crater the usually dusty path at the Estero Bluffs. I glance up and remind myself that I need this. This breath of salty air. My dog needs this. His tail is firmly in the wagging position, a pep in his trotting step, his nose sniffing wildly for those who came before us or the gopher he just missed.

This is a chore I need to add to my weekend list. I forget sometimes as I get lost in checking things off, moving from one thing to the next like a robot—telling myself I don't have time to make a meal or take a walk, I get lost in the desire to finish things. My rest and my brain's need for down time are secondary in the bustle to make the most of the weekend. And then I think, "This used to be our weekends," with a sigh.

Deep breaths. I love all the challenges that school has brought into my life, but it's been a struggle to juggle the new workload and ensure that I'm still doing the things that bring me peace, that allow my mind to check out of task mode and into nothingness. This is what I need to make time for, I tell myself, to bring a little more balance to this life of mine.

I angle my attention to the next little trail down to the wet of a beach after the rain. White foamy waves roll onto the shore, which is surprisingly clear of the kelp that routinely covers the sand here. I sit on a boulder, rolling a rock between my fingers before tossing it toward the water. Lost in thoughts that have no real end and beginning, my mind wanders into nothing but the sound of air bubbles as the ocean recedes and determining whether it's a surfer or seal bobbing along in the distance. My stomach growls, signaling that it's time to leave the respite and move on with my more balanced day. Δ

Editor Camillia Lanham is dreaming of bagel breakfast sandwiches from Top Dog in Cayucos at clanham@newtimesslo.com.