Ballet Unbound, a Movement Arts Collective production, will show at the Performing Arts Center San Luis Obispo on Nov. 15 at 7 p.m., and Nov. 17 at 2 p.m. For tickets and more information, visit pacslo.org.

At the Movement Arts Collective, you can find touches of European style that set it apart from what owners Maartje Lawrence-Hermans and Ryan Lawrence call the "American artistic sensibility."

The couple met in Amsterdam when they were both dancing professionally. Maartje was born in the Netherlands and had danced there since she was 6, while Ryan grew up here in SLO before going to Europe to pursue his dream. When the pair decided to open their own dance studio, they brought their combined experiences with the contemporary European dance scene together to start the Movement Arts Collective in 2017.

Today, Maartje and Ryan are putting the final touches on Ballet Unbound, a three-part production that bridges the gap between classical ballet and the couple's original, contemporary choreography. Ballet Unbound will show at the Performing Arts Center on Nov. 15 and 17.

"We're taking this foundational technique of ballet but extrapolating it into what would be dance now," Ryan said, "a work that has the structural physicality of ballet but explores themes that are better told in a vocabulary that's not only said in French."

With a 40-person cast of dancers ranging from ages 8 to 18, Ballet Unbound starts with Catherine Barnickel's re-staging of Marius Petipa's classic ballet called "Harlequinade." This story of unrequited love and finding acceptance gives "a historical context to ballet to allow the other two pieces to extrapolate a little bit," Ryan said.

"It's a classical ballet with pointe shoes and tutus, but it will be new music for a lot of people," he continued. "That's our traditional, historic piece. The other two pieces now have the ability to pull away from that."

"It's actually covering a little bit of my world when I immigrated," Maartje said. "It talks about the experience I had of feeling ripped out, your roots taken away from you. ... It really shows how after you've figured out what you lost and you realize what you gained, there is a middle space, a space where you can cherish the old, receive the new, but be OK right in between it and not constantly be swung from side to side."

The third part of the show introduces us to Ryan's original work. Titled "In the Middle Ground," the piece is a co-production with Festival Mozaic and will be performed again in February with live music as part of the festival's Winter Mezzo program.

"Its focus is on the polarization of Bach and Pablo Cascals. Bach composed the Cello Suites, but Pablo Casals made them famous and reignited this passion for Bach's music," Ryan explained, adding that while "Bach was making this music that was there to glorify God and was really about divinity ... Pablo Casals was looking for the humanity between the notes."

Ryan said that what happens between the lines, the music notes, or the dance moves is what inspires the third and final part of Ballet Unbound. 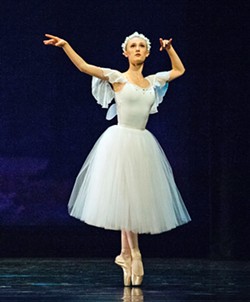 "It's not what we do onstage, it's the space between that allows for resonance and that connection between dancers, history, and music," he said.

As individuals who have witnessed and lived the differences between European and American ways of doing things, Ryan and Maartje said productions are generally treated as more of a commercial venture in America than they are in Europe.

"Here it's a lot of private donations and ticket sales. In Europe you've got the leeway to be creative without the idea of 'I'm going to be making a production that sells,'" Ryan said.

In the European spirit, the couple hopes that their audiences will walk away with more than just a commercial exchange of entertainment, but a more profound and lasting appreciation for ballet as an art form.

"With entertainment, the goal is to lighten your experience, and with art, it's to deepen and enrich it," Ryan said. "We're trying to do something that is fun, but I want it to leave [the audience] with a stronger emotion than just, 'What's next?'" Δ