Bang the Drum Brewery redefines what a bar can be

If you’ve ever owned a radio, or were lucky enough to watch MTV in the glorious 1980s, you probably got Todd Rundgren’s ultra-catchy hit, “Bang the Drum All Day” stuck in your head more than once. You probably even owned the LP.

The plucky refrain: “I don’t want to work/I just want to bang on the drum all day,” is not only pop gold: It’s essentially what we mutter to ourselves every day, while working bland desk jobs or studying for seemingly pointless calculus tests. The live, low-budget music video for the tune shows shaggy-haired, tight-jeaned Rundgren bouncing up and down while unapologetically beating the drums before an energetic crowd—and yes, he’s wearing black Ray Bans while he’s doing it.

Free spirits of all walks of life will be glad to know that this badass attitude is alive and kicking at SLO’s newest brewhouse, aptly dubbed Bang the Drum Brewery. The brew pub’s Aug. 31 grand opening not only saw lines out the door for their popular King Mate British Style IPA (infused with Yerba Mate), but also joyful, spirited dancing and a passionate drum circle to boot. Noelle DuBois is director of sales and marketing, but—as she came to find out very quickly—she doesn’t really need to market that hard.

“Abe Perlstein, who does a lot of the drum circles in town, came out for the opening. People were dancing, and it was just amazing,” Noelle said of the raucous 300-plus crowd. Believe me: I’ve seen the sweaty, gleeful footage captured on her iPhone. It was obviously a magnificent night that I will forever regret missing.

The business has tapped into something primal. At Bang the Drum, anyone can grab a pint and let off a little steam on their public lineup of congas, bongos, and other percussion instruments. Who doesn’t dream of banging on something loud now and again? Brewmaster Jeremy Edward Fleming understands, as he was a real-life drummer in a past life.

“Just having the drums here gives people something to grab hold of,” Fleming said. “People bring their kids in here, and during our soft opening, I even did a little drum show for the children and showed them how to play.”

The pieces for the business came together when Southern California architect and Bang the Drum President Gary DuBois was throwing back a few beers with Noelle, who happens to be his daughter.

“We were at Coronado Brewing Company in San Diego at the time, and I was just talking about how cool it would be to own a place where people could hang out and play the drums,” Gary said. “I had also been listening to the Todd Rundgren song.”

For months beforehand, SLO residents Noelle and Fleming had been talking about opening a local business with Gary’s help, perhaps a restaurant or even a chocolate operation (Fleming cut his culinary teeth making desserts at Black Horse Coffee Company).

Thanks to a little Rundgren on the radio, an idea began to take shape: The trio would create a brewery that combined craft beer with laid-back fun, Central Coast style. If they made the beer and provided the drums, people would come. Right?

They were 100 percent right.

The brewery’s stripped-down, industrial chic patio has been packed for weeks, and the all-wooden bar, featuring low-key burlap ceiling and beer-specific glasses, has become the new “it” spot off the beaten path. 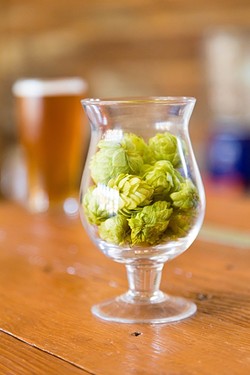 Fleming, a current Cal Poly electrical engineering major, finds the intricacies of the brewing process infinitely sexy. The brew master is not unlike a mad scientist, although with his tan skin and flip-flops, he looks more like a surfer than the beaker-toting “beer geek” he most certainly is.

One thing’s for sure: Fleming is damn proud of his brews, which include Bang the Drum’s refreshingly balanced Session IPA No. 1; authentic style German Hefeweizen (Das Weiss); dangerously delish Barley Wine (9.5 percent alcohol!); and Nebula, a luxurious bourbon-barrel-aged chocolate porter, among others. Fleming’s ever-popular King Mate is expressive and fresh, boasting a tropical fruit aroma and a distinct, earthy bitterness.

“In California, we are so used to these hop-forward, citrusy beers, and with King Mate, I went with an English style, more malt-forward beer,” Fleming said. “It’s got a complex, unique characteristic that you won’t find in many IPAs on the Central Coast, or the state, for that matter.”

Refreshingly, local breweries are supportive of the renegade newcomer, who proclaims to like doing things “a bit off the wall.” Bang the Drum currently shares hops with Paso Robles-based BarrelHouse Brewing Company. Nearby Tap It Brewing Company is happy to lend out its keg washing system when needed.

“We are the smallest brewery here on the Central Coast, and perhaps even in California at the moment,” Fleming said. “I’ve said it before, and I’ll say it again: We really wouldn’t be here if it wasn’t for the support of so many local breweries.”

In essence, Fleming has the freedom to do what he wants. Sound familiar?

“We can play around with styles and see what people like. The ones people like—those are the ones we are going to keep making,” the brewer said. “Keeping our operation small on a three-barrel system allows us to create lots of experimental brews and find out what the next craft beer is going to be. People are loving sours right now, but what is the next thing? Who’s to say we can’t bring it about?”

Whether Fleming is making just enough for three kegs or 16 kegs to distribute to local restaurants, one constant remains: The ingredients must be of epic quality. Fleming searches near and far for the goodies inside his bottles. In fact, the trio recently spent two back-breaking weeks sourcing hops from a nearby Edna Valley farm, and a glass of the resinous buds now sits atop the bar for ceremonious huffing. Malt is sourced from around the globe.

“Whether you’re making beer or bread, you won’t get the best result unless you’re using the best products,” Fleming said. “The first time you try to skimp, it totally shows. You have to use the best.”

Being “the best” might sound like a whole lot of annoying work. But, as it turns out, when your work is play, you’re more than stoked to do take on the task.

According to Gary, the idea behind Bang the Drum—both the song and the business—isn’t complicated. Like beer, it’s easy to understand and inherently good.

“It’s about following your passion and what you want to do,” Gary said. “I think that’s why the idea appeals to so many people. And that’s exactly what we’re trying to do here.”

Let us buy you a beer, friend! Share your delicious drink favorites with Hayley at hthomas@newtimesslo.com.