After a long day spent in the sun traversing the beautiful Carrizo Plain on April 2, I couldn't think of a better place to relax on Sunday night than at Bang the Drum Brewery, which was hosting its annual Puppy Love event to benefit Woods Humane Society. 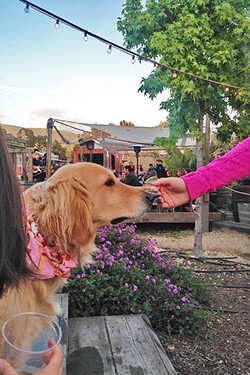 The concept: Bring your dogs and friends and enjoy Bang the Drum brews, bites from The Grilled Cheese Incident food truck, and live music. Plus, 15 percent of all the night's proceeds go to Woods. My girlfriend and I don't own any dogs yet, so we actively look for any excuse to hang out with them. Plus, we were really craving grilled cheese after our Carrizo Plain adventure.

Stepping into Bang the Drum, the fun and chaos of this epic doggy party immediately hit my senses. Dogs of all breeds and ages pace around the brewery patio playing, barking, and peeing. Before sitting down with our beer, Clare and I gunned it for the grilled cheese truck and ordered two sandwiches to share. 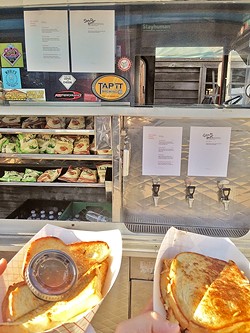 As we chowed down on the food and I drank a Tahitian Knight imperial porter, with Tahitian vanilla beans aged in bourbon barrels, we met a few dogs: Freddie Mercury, a golden retriever puppy, and Doughboy, a pit bull.

Doughboy's owner adopted him at Woods and got his adoption fees waived since he's an Army veteran. We chat about what a great service they do and why the event was a great way for the community to give back. Meanwhile, the dogs were playing relentlessly, especially Freddie Mercury and a black lab pup, who were drawing laughs from the entire patio as they wrestled all over the ground. Before long the live music started and the sun dipped over the hills. 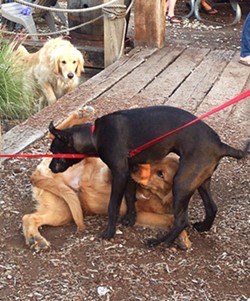 While Puppy Love was definitely fun and hilarious, it was a little painful to see so many happy dog owners and not have a pup ourselves. Our curiosity made for some interesting conversations with owners about raising different types of dogs and for brainstorming about what breed we eventually want to adopt (for me, a German shepherd, for Clare, a pit bull). Good times, Puppy Love—hopefully we'll be back next year!