I can already smell the sweat seeping out the front door and open windows onto Higuera Street in downtown SLO. It's sickly sweet and covered in beer that's been sloshing around on a dance floor since high noon. Part country, part rock, and all guitar, this is what happens when you roll into the Frog & Peach at midday and stumble out after the bar closes.

That's actually what could happen if you catch any or all of Twang N Bang XII, happening Sunday, Sept. 3 (free, 21-and-over), with more than 22 acts colliding on indoor and outdoor stages playing 20- to 25-minute sets a piece—you won't regret it. Actually, how you feel about things the next day is on you (We all make our own choices, people!), but this year's event promises to be a rollicking ride down a crooning country road that dead-ends with more bang than "your average pub show," according to fest founder Patrick Hayes. A little bit of punk, grunge, surf, Americana, and country, all wrapped up in a long day of swaying, sipping, swigging, shaking, springing, and swinging.

"The first Twang N Bang happened as a way of showing reluctant bookers that country-flavored acts were a safe bet at a time when even a little twang scared venues off. Since then we've seen Americana become a massive part of music played at pubs and clubs in SLO," Hayes said in press materials. "Accordingly, Twang N Bang has shifted to continue celebrating the twangy bands while also putting an emphasis on some of the 'bang' bands."

Feel like one 14-hour session of band after band just isn't enough music for one weekend? The Twang N Bang pre-party can get you that good stuff before the big day. It's all happening at The Siren in Morro Bay on Friday, Sept. 1 (5 p.m. to midnight). The evening celebrates the release of Hate Ray, the Dead Volts' second album (the first, We Are Already Dead, was released in 2014), with a lineup that includes some Twang N Bang headliners.

The Dead Volts, who just got back from touring the Pacific Northwest, describe themselves as playing "no bullshit twang-rock" with Pete Robbins on bass, Keith Kurczewski on guitar, Twang N Bang founder Hayes on guitar and vocals, and Mark Folkrod on drums and vocals. They recorded the album last year at Dial Back Sound in Water Valley, Mississippi, and it was produced by Drive-By Truckers and Dexateens bassist Matt Patton.

"The album is a little darker and a little grumpier than our last album," Hayes wrote via email, adding that there are hopeful tunes on it, too.

It's got some twang, a lot of bang, and a little bit of pain.

You can start your three-day weekend at a couple of places. It really depends on what you're into. On Friday, Sept. 1, Vina Robles kicks off things with Chicago (8 p.m.; all ages; $45 to $95 at vinaroblesamphitheatre.com), that rock 'n' roll band with horns, dozens of albums, and 1970s and '80s hits like "You're the Inspiration," "Hard to Say I'm Sorry," "Saturday in the Park," and "Make Me Smile."

The 10-member band's latest record, Now, Chicago XXXVI, includes 11 brand new songs and was recorded on the road. "Chicago has built a new recording system that is flexible, portable, powerful, and musical. This new 'recording rig' travels with the band," press materials said. "From the signature sound of the Chicago horns, their iconic vocalists, and a few dozen of ever-classic songs, this band's concerts are celebrations."

This year marks the band's 50th year of touring. They've never missed a concert date, and you shouldn't either! 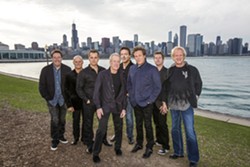 Need some country in your life? Blacklake Golf Resort in Nipomo and Hardy & Company Enterprises will be hosting the second 805 Country Music Festival & AG Show of the summer on Sunday, Sept. 3 (1 to 7 p.m.; $25, $45 for VIP; eventbrite.com).

Feel like you need more fog than sun? How about a cool ocean breeze?

Then head over to Los Osos and into the Baywood Ale House for a Lazy Sunday Labor Day Party on Sunday, Sept. 3 (2 to 7:30 p.m.; free) for some local tunes, games, live painting, and yes, a beer garden.

You'll hear jazz and folk rock from singer-songwriter Matthias Clark, J1 & Dolo, the surf rock and country sounds of The Karate Laundry Project, and The Bonneville Phantoms (who are also playing a show at Tooth & Nail on Friday, Sept. 1, 5:30 p.m.) will take you back to your Americana roots with some rockabilly to keep you revved up and ready to not go to work on Monday.

Instead, you can head to The Cliffs Resort on Monday, Sept. 4, where Good Medicine presents the hard-hitting grooves and R&B sounds of Soul Scratch and the Brian Titus Trio (1 p.m.; all ages; free). Grab your blankets and a seat on the lawn for this family-friendly show. No outside food or drink is permitted.

"We are on a mission to cure the world of hate, and educate all people in the power of love, peace, and music," Soul Scratch states on its website.

So get ready to heal. After this summer of not love, this country needs it!

Don't want to leave SLO after work on Friday, Sept. 1?

Don't worry. There's plenty to walk around and find. Concerts in the Plaza hosts local modern/classic rock act and New Times Music Awards winner Truth About Seafood (8 p.m.; all ages; free) in one of the last Mission Plaza shows of the summer season. But, be prepared, this one won't be like the others!

"We're doing full '70s vibe/outfits and asking everyone to try to dress the part as well," Brad Daane (bass, vocals) said. "There will be lots of mustaches to go around." 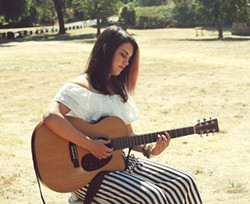 There will be a costume contest during the show, so get those platform boots and bell-bottoms ready to roll.

California Roots, Ineffable Live, and Otter Productions presents the Boombastic, Mr. Fantastic, Shaggy (yes, it was him!) at the Fremont Theater on Wednesday, Sept. 6 (7 p.m.; all ages; $27 to $32; eventbrite.com). The multi-Grammy award winning Jamaican-American reggae-influenced artist is best known for hits like "It Wasn't Me," "Angel," and "Boombastic."

Local Indie rockers Future Dead Men and Eat the Wolf will blast off the stage at SLO Brew on Friday, Sept. 1 (10 p.m.; 21-and-older; $10). LA-based hip-hop duo Blu and Exile, who recently released previously unreleased songs from their first album, 2007's Below the Heavens, take their underground sounds to the Brew on Saturday, Sept. 2 (10 p.m.; 21-and-older; $5). As LA Weekly's Jeff Weiss puts it: "Before there was Kendrick Lamar, there was Blu." And on Wednesday, Sept. 6, Spanish-born singer-songwriter Leroy Sanchez will pop emotive, acoustic-based, dance-oriented tunes at SLO Brew (10 p.m.; 18-and-older; $15).

In downtown Morro Bay, Bobby Love and Sugar Sweet will combine pop, funk, rock, and a little reggae and ska for a special Labor Day Weekend Show at the The Siren (3 to 6 p.m.; 21-and-older). Dance party vibes are pretty much guaranteed!

"In an era where most are skeptic about the current state and future of the music industry, I wanted Trilogy to tell a different story. The record biz might be broken and Spotify might rip us off, but that can't keep an artist down. Creativity is very much alive, and music is the celebration of life," she said in press materials.

Jill Knight plays Robin's Restaurant in Cambria on Thursday, Aug. 31, for Summer Nights in the Garden (5:30 to 8:30 p.m.; $3; all ages) and Baywood for Beer at the Pier on Monday, Sept. 4 (5 to 7 p.m.; all ages; free). A native of Savannah, Georgia, Knight delivers Southern Americana and blues with a little soulful R&B thrown in the mix.

Petrella and her band Mixed Influence will countrify Chateau Lettau in Paso Robles on Friday, Sept. 1 (7 to 9 p.m.), with a fusion of R&B and country music.

The Red Barn Community Music Series holds it down with the Dos Valley Trio on Saturday, Sept. 2 at the Red Barn in Los Osos Community Park (jam at 5 p.m., show at 6 p.m.; all ages). The trio will perform songs off their Jewels of the San Joaquin album, "a musical heritage preservation project that showcases traditional fiddle tunes and songs learned from four outstanding Central Valley musicians: Kenny Hall, Otis Pierce, Ron Hughey and John 'Dad' Crocket," according to press materials. All the music Jewels "springs from these traditional musicians who lived and performed in the San Joaquin Valley of California from 1919, when the Crockett family arrived in Fowler, to 2013, when Kenny Hall passed in Fresno."

The Real Blues Jam North will be "playin' dem blues" at D'Anbino Cellars in Paso Robles on Thursday, Sept. 7 (6:30 to 9:30 p.m.; $5 minimum suggested donation) after a successful run at The Libertine Pub in Morro Bay. Led by Ted Waterhouse (guitar, slide guitar, vocals), Bruce Willard (bass), and Dean Giles (drums), all musicians are welcome regardless of experience. The only requirement is to focus on the blues, baby. Δ