Harvest is a beautiful, magical time when a new vintage beckons just around the corner—blah, blah, blah. We’ve heard this all before.

Yes, harvest is an exciting time for our local winemakers and vintners, but it’s also hard work. OK, grueling work. You wake up before dawn and you pick. Then, you pick all day and into the night. It might reach triple digits in Paso Robles during the day then swing down below 40 degrees come nightfall.

There’s sporadic rain and rot to contend with—then there’s the ongoing drought. On the crush pad, the work can feel never ending. The steady influx of grapes is controlled by Mother Nature herself, and she waits for no human.

For Firestone Walker Brewing Company Brewmaster Matt Brynildson, there’s no better time to crack open a cold one with his winemaker friends. In return, these loyal winemakers put their expert palates to the test, creating the brewery’s annual Anniversary Ale. This year’s beer, XIX, is a decadent blend of 33.33 percent Parabola, 33.33 percent Stickee Monkee, 16.6 percent Bravo, and 16.6 percent Velvet Merkin. Starting in November, the beer will be available at Firestone Walker Brewing Company’s taproom and across select markets.

“Wine harvest has been working against Matt every year because it keeps coming earlier and earlier, and winemakers are starting to prepare earlier and earlier,” said winemaker Sherman Thacher of Thacher Winery, who created the winning blend alongside partner Daniel Callan. “Everyone has such a good time doing it, it doesn’t matter if I’ve got four tons of grapes that just came in. We always figure out a way to make it happen.”

The 2015 beer is quite different than hoppier versions created in years past. 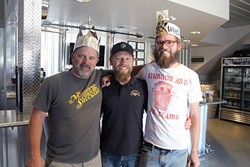 “We didn’t allow any of the winemakers to use any of our hoppy beers or non-barrel-aged beers in the blend, and the result is this really rich, chocolatey, chewy brew that has a lot of flavors of brandy-soaked raisins and holiday fruitcake,” Brynildson said. “Every year, it’s a great beer in terms of something you want to sit down and sip after dinner. But this year, we blended together 235 oak barrels and four different beers creating something truly complex and exceptional.”

Thanks to the win, Thacher and Callan are now the owners of two coveted cardboard crowns and major bragging rights (this is a very big deal in the local wine world).

As it turns out, Thacher was a brewer for Los Gatos Brewing Company in a past life. When I asked him if he thought this knowledge provided a winning edge, he just laughed.

“In the past it probably helped me lose,” he said. “In earlier competitions, I was very conscious about the amount of hops in the final blend, although the winemakers preferred hoppier versions. They didn’t anticipate the fact that hops break down over time and are maybe not the ideal situation for a barrel-aged beer.”

This year marks the fifth competition between the winemakers, and oh, how it has intensified.

“These winemakers want to win,” Brynildson said. “Saxum won two years in a row, and the second time they won, the guys created these hand-made crowns, and now those crowns continue to pass between all the different winemakers. Sherman and Daniel will be treated as royalty at our anniversary party on Halloween.”

Rumor has it that last year’s winners, Russel From and Philip Muzzy of Herman Story, pulled up to the annual anniversary party in a limo while donning camouflage suits and the aforementioned crowns. When I asked Thacher if he’d be donning the crown on Halloween, he replied, “I think we have to.”

I agree. I’d hate to see what would happen if the crowns went missing. Riots outside the taproom? Beer flowing in the streets?

Rivalry aside, Brynildson lovingly refers to all of the participating winemakers as “friends in fermentation science.” This year’s group included such local stars as Matt Trevisan of Linne Calodo, Stephan Asseo of L’Aventure, Steve Martell of Kaleidos, Eric Jensen and Connor McMahon of Booker, Russel From and Cameron Stoffel of Herman Story, and Scott Hawley of Torrin Vineyard.

If you think this all sounds like a bunch of boisterous fun, you’d be wrong, but only partly. There’s quite a bit of hard work going on behind the scenes. 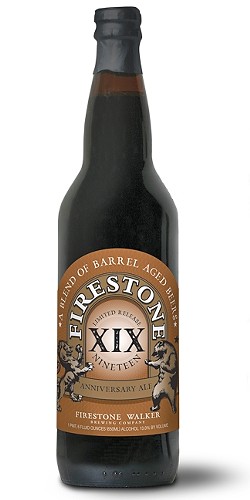 During the competition, each winemaking pair must create their best blend of the Firestone beers before handing them over to Brynildson to re-create. Finally, the beers are blind tasted by the group, which must grade each brew on a point system (this is what passes as “fun” when you’re a total flavor nerd). According to Thacher, it’s common for winemakers to not vote for their own beers on accident. His approach—which includes eliminating any beer that doesn’t smell good before taking a single sip—paid off.

“We found out that we did in fact vote for our own blend, although I’m sure that in the past, I got it totally wrong,” Thacher said. “It all happens fairly quick, and it’s a lot different than actually sitting down and creating the beer.”

Last year, reports surfaced of flavor-enhancing drug use, but Brynildson said he “could neither confirm nor deny the allegations.”

In the end, the heated competition, the crap-talking, and the showboating are all in good fun—and a welcome distraction when you’re a grape weary winemaker embarking on the arduous journey that is harvest.

As Thacher likes to say, “Beer is a substantial part of winemaking.”

From what I’ve heard, he’s right. And it doesn’t take “a lot of beer to make good wine.” It takes a lot of winemakers to make good beer!

Not only did Firestone Walker Brewing Co. make history recently when it was awarded the title of Great American Beer Festival’s “Mid-Size Brewing Company and Brewer of the Year” for the fourth time in less than a decade, they’re also embarking on a new brewing project honoring one of Paso’s most historically significant residents, Ignacy Paderewski. The new Paderewski Pils, a dry-hopped Polish-style pilsner, will debut on draft at Firestone Walker Brewing Company beginning Nov. 1. The beer celebrates Paderewski’s history in the region, which includes the planting of some of the area’s first zinfandel grapes. The brewery will donate proceeds from the beer to the Paderewski Festival, which brings acclaimed classical music and Polish composers to the Central Coast Nov. 5 through 8. For more information, visit firestonebeer.com.

Hayley Thomas wonders how Firestone Walker has the time at hthomas@newtimesslo.com.