Barren and unkempt: Families mourn amid dust and gopher holes at the Arroyo Grande Cemetery

Miriam Moustirats looked out across the expanse of the Arroyo Grande Cemetery with a frown.

“The cemetery has a lot of problems,” she said. “People have told me it looks abandoned.” 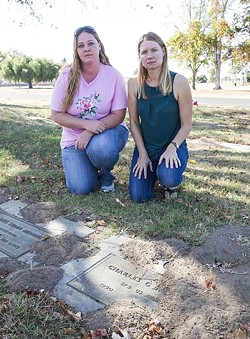 If you were passing by the cemetery, wedged between Brisco and North Halcyon roads, you might get that impression too. The 20 acres of land, home to roughly 15,000 deceased individuals, is a large swath of yellow and brown. Up close, the view isn’t much better. The cemetery grounds are mostly dead grass and bare dirt—uneven, porous, and pockmarked with mounds and gopher holes.

“The graves are not nice. They’re covered in dirt and there’s gopher holes,” said Moustirats, who buried her newborn son Nicolas in the cemetery in 2009. “It happens to my son’s grave all the time, I have to sweep the dirt away.”

Miranda Osteen, whose mother is also buried in the cemetery, had similar feelings about the state of the landscape.

“Now, why would we want to come to a place that looks like this to mourn our loved one?” Osteen said.

At one time, the 20-acre cemetery looked like many others in the county, green and well manicured, but those days are long gone, mostly due to the impact of California’s historic drought.

But fighting the drought and saving water came at the expense of an aesthetically pleasing cemetery for families with friends of the people buried there.

“I was at the cemetery last month to bring flowers to my mother’s grave,” Victoria Myrick Ramos wrote on the Arroyo Grande Memories Facebook page. “It was so sad to see how unkempt it is.”

It doesn’t just look bad. Osteen said the uneven ground could be a safety hazard; hampering elderly or disabled residents there to visit deceased loved ones. One person in the Facebook group recounted an incident when a man at her own mother’s funeral service fell while giving a eulogy.

“As I helped him up I felt bad, embarrassed, and afraid for him,” she wrote.

Moustirats and Osteen are the most vocal residents raising concerns about the state of the cemetery. They’ve created petitions. Moustirats says there have also been thefts from her son’s grave and others, with solar lights, flowers, stuffed animals and flags going missing. Both women have started showing up to the cemetery district’s board meetings, lobbying them to search for ways to fix the cemetery grounds and install a camera security system.

But the solutions to those problems cost money, and the cemetery district is short on funding as well as water.

Because it’s a special district, the cemetery doesn’t fall under the city’s jurisdiction and receives no funding from the city of Arroyo Grande. Instead, the cost to run the cemetery comes from property taxes and the services rendered. Of its $442,278 budget, the district spends roughly 52 percent on salary and benefits for the cemetery’s three employees. The rest goes to maintaining of the grounds and aging cemetery equipment, and that all before the cost of the water. Fibich said the cemetery has run a deficit for four of the last five years.

“We are challenged,” he said. “We’re operating on a very thin margin.”

Part of the problem is the amount of money the district receives from property taxes—just $114,513—despite the fact that the assessed value of local property in the district, which runs from Shell Beach to Nipomo, is more than $9 billion dollars. That revenue is minimal when compared to districts with a smaller assessed value but higher tax rate like the Paso Robles Cemetery District, which pulls in more than $400,000 annually from property taxes on $5.5 billion in assessed value.

Increasing the tax rate for the Arroyo Grande Cemetery District is easier said than done. The change would have to be proposed as a ballot measure and get approved by at least two-thirds of voters.

“It’s very difficult, as you know, today to get something passed on a two-thirds majority,” Fibich said.

SLO County Supervisor Lynn Compton, whose district includes the cemetery, agreed that voters were unlikely to support such a tax increase. Speaking after Fibich at the Oct. 11 City Council meeting, Compton said she had empathy for the families with loved ones buried at the cemetery.

“It’s a financial situation and a water situation,” Compton said. “It’s not pretty to look at, … but that’s the situation we are dealing with.”

Moustirats and Osteen have heard these explanations before. They say they understand the funding and drought woes the district is having. But the understanding brings them little comfort when they visit a barren cemetery to sweep away the dust obscuring their departed loved ones’ graves.

“They always have excuses … I feel frustrated,” Moustirats said. “They’re not working hard enough to make changes. What I see is people shrugging their shoulders and telling us, ‘That’s how it is.’”