Basement diaries: A glimpse into the New Times editorial team's home away from home

Photos By Karen Garcia COZY This editorial duo has ditched the traditional fluorescent lighting and lit up the office with lamps and string lights.

It takes a lot of talented individuals to put together a newspaper publication, and in our case, it takes an eclectic group to produce the New Times every week. 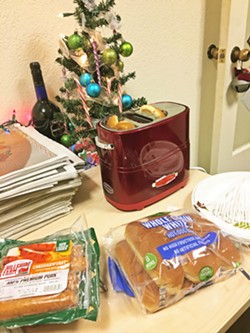 Although we all work on different aspects of the publication, most of the New Times team works together in our downtown office, known endearingly to the editorial team as The Basement. Why that name? Our office is literally underground, with few windows letting in natural light. But it's our cozy home away from home, and we've decorated it as such.

Take Kasey Bubnash, for instance (you know her for her extensive coverage on local vaping policies). Bubnash has a few Instax mini photos (similar to Polaroid photos) of her best friends on her wall.

And Peter Johnson, groundwater and cannabis reporter extraordinaire, has bobbleheads of Stephen Curry and Kevin Durant of the Golden State Warriors on his desk. (Although now that Durant has left the team, Johnson said he doesn't really know what to do with that bobblehead.)

As for me, I have a Hello Kitty Los Angeles Dodgers bobblehead to display my love for my LA team. Associate Editor Andrea Rooks now has a standing desk, a trend that came from Bubnash. Small Batman posters cover the top of Calendar Editor Caleb Wiseblood's computer screen. Proofreader wizard Nick Gagala has a perfectly positioned lamp that helps him when he's reading our stories. Our boss lady editor, Camillia Lanham, has group photographs in her office from New Times events.

I don't want to bore you with listing off every single person's desk items, but this basement has a lot of personality. After years of fluorescent lighting, Johnson and Bubnash launched the lamp and string-light movement. We've gotten a lot of compliments that say our department feels warm and cozy. Our editor says it feels like a college dorm room, but secretly we can tell she loves it.

Going with the college dorm room theme, we also recently acquired Rock'em Sock'em Robots during the white elephant event at our office holiday party. A robot boxing match is a fun way to blow off steam after several hours of punching away at our keyboards. Let's not forget the stash of community candy, cookies, and chips that keep us fueled on production days.

In the center of the room, we have a pillar that's covered with Post-it notes—we call it the "quote board." The Post-its have memorable quotes that come from this editorial staff and those before us. They're quotes that have usually made us laugh until we cry, and reading one will most definitely put a smile to your face.

The basement has its ups (mostly ups) and downs. Sometimes, we groan about not having natural light down here, but that's what coffeeshop breaks or on-site interviews out in the county are for.

On production day (Wednesday to be exact), the basement is quiet as we work on the last news pieces for the publication. On other days, we're pretty noisy with conversation and plenty of laughter.

During the week from 8:30 a.m. to 5 p.m. (sometimes later), The Basement is a place where not only interviews, research, and writing take place, but it's a home where bonds are made. It's a home where we can bounce ideas off each other and learn from one another.

It all comes back to our fearless leader, Lanham, who's selected what I think is a solid team of curious individuals who want to understand and inform the community. We all have different strengths and weaknesses as reporters, but we're never tired of growing as journalists and individuals.

My favorite part about The Basement has always been the people, my friends. Δ

Staff Writer Karen Garcia is typing away alongside her friends at kgarcia@newtimesslo.com.