This contemporary prequel to Alfred Hitchcock's 1960 horror classic, Psycho—which was based on Robert Bloch's 1959 horror novel about isolated motel caretaker Norman Bates and his domineering mother—is set in modern day Oregon and stars Freddie Highmore as Norman; Vera Farmiga as Norman's mother, Norma Louise Bates; Max Thieriot as Norman's older brother, Dylan; and Kenny Johnson as Norma's estranged brother, Caleb. The origin story sets up Norman's growing psychopathy as well as Norma's overprotectiveness and her own twisted, dysfunctional upbringing. It's set amid the backdrop of White Pine Bay, a town with secrets and a history of violence connected to the cannabis trade, centering on Sheriff Alex Romero (Nestor Carbonell) and "legal" drug kingpin Bob Paris (Kevin Rahm), as well as a host of other quirky characters. (50 45-min. episodes) 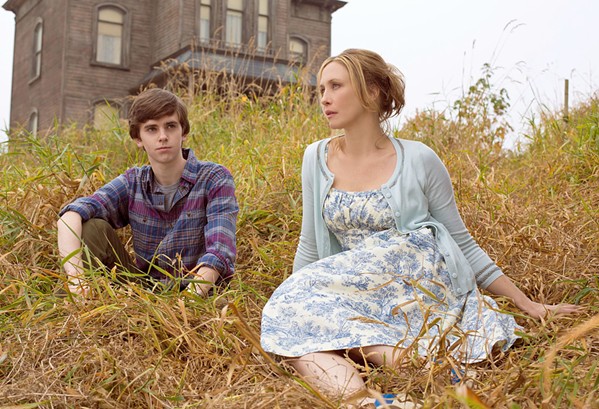 Glen Prior to the pandemic, I probably wouldn't have gotten sucked into this long-running A&E series, which ended in 2017 but is now available in its entirety on Netflix. Discovering it is a silver lining to the lockdown. I really became engrossed in the story and the acting challenges for Farmiga and Highmore, who both have to play two characters. Highmore plays Norman, but he also plays Norman taken over by his Norma personality; Farmiga plays Norma, but also Norman's version of her. His mother's alter ego was created to protect him—she's the strong one who can come out and kill as needed. The series is juiced up by a lot of interesting subplots, such as Norman's first sexual encounter with Bradley (Nicola Peltz, a beautiful classmate with a problematic home life), and Emma Decody (Olivia Cooke), who is first attracted to Norman and later, after she comes to work at the motel, Norman's brother, Dylan. The best part of the series is the sharp character work. The acting is terrific! If you're a fan of Hitchcock's film, you'll find plenty of familiar elements to enjoy as Norman drifts into madness.

Anna This wasn't on my radar while it was airing new episodes on A&E, but I'm glad I watched it in a binge because boy-oh-boy did I stay engrossed! With 45-minute run times and five seasons' worth of episodes, this series kept us entertained for a nice long stretch. Norma and Norman move to White Pine Bay six months after Norman's father suffers a terrible accident at home and dies, leaving behind an insurance policy that allows Norma to purchase the defunct motel. It doesn't take long to realize that Norman's quiet nature actually covers up a monster, and that his puppy love for his mother is creepy at best, sinister at worst. No one, especially another man, will ever be good enough for the woman who raised him, a woman whom he still shares a bed with at 16 and obsesses over constantly. Soon the distraction of Bradley takes over, but in the end nothing can come between the two Bateses—even when wild child Dylan shows up and throws a wrench into their party of two. Of course the story has to take some big turns; how else do you stay on TV for five years? But as out there as it gets, the characters keep it all too real. We feel like a fly on the wall watching the craziest family drama unfold.

Glen What's amazing is the series gets better as it goes along, but it has the good sense to end at the right time. All too often, if a series is holding its audience, they'll keep it going, milking the story like a tired cow, but here we see the end coming, and though I'd watch more episodes if there were any, the conclusion is truly satisfying. It's also worth noting that instead of filming on the Universal Studios lot in Hollywood, where the original set of the 1960 film Psycho still exists, this series was filmed in British Columbia, where a replica of the creepy Queen Anne-style home and 1960s-era motel were painstakingly built. The house, perched on a hill looming over the motel, is a character unto itself. There are a lot of characters, subplots, twists, and turns, but at its heart, Bates Motel is the story of a mind unraveling, and it's impossible to turn away.

Anna It's interesting coming into this series knowing the characters from the film and letting this unfold in its own right. Norman is increasingly unpredictable, and especially in the later seasons he's straight-up unhinged. Dylan's character is also really interesting. Abandoned and unliked by Norma, we soon learn that while Dylan has done nothing wrong, his origin story is deeply painful for Norma. He cares enough about his estranged younger brother to stick around though, and when he starts to realize that there's something wrong with Norman, he doesn't run for the hills—even when he is being shunned and pushed away in every way possible. Emma is another key character who evolves from Norman's classmate into practically a member of the Bates family, left by her own mother at a young age, she looks to Norma as her confidante and caretaker. I'm glad they ended it when they did—though, like you, I totally would have kept watching. This series is worth watching again, even if you caught it on TV when it aired. Δ