On Feb. 2, Brian LoCante hopped the wooden fence that stood between him and the thickly vegetated bluff top that overlooks Pirate’s Cove in Pismo Beach. He moved along a narrow dirt trail with hardly a glance at the red-lettered sign nearby.

“Private property. No trespassing. No camping” the sign read. “Violators will be prosecuted.”

Just under it, another, “Hazardous bluff area. Keep out.” 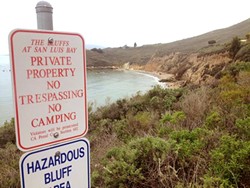 LoCante isn’t afraid of the signs dotting the paved path along the bluffs, which stand in the shadow of the massive multi-million dollar luxury homes that make up The Bluffs at San Luis Bay’s gated housing community. To him, those warnings were simply symbols of a recent conflict between beachgoers like himself, the city of Pismo Beach, and the Bluff’s Homeowner’s Association (HOA) over the public’s right to access the bluffs and trails down to the popular scenic beach spot.

“It offended me that they told me I can’t access the coast,” LoCante said.

The battle lines were clearly drawn, if not slightly entangled. The disputed area, which includes the Shell Beach Bluff Trail, is sandwiched between Bluff Drive, which is private property of the gated community, and the beach. That wedge of land is subject to a blanket easement for public pedestrian and recreational access, according to the California Coastal Commission. For decades, the beach below the steep bluffs was a popular hangout. Like LoCante, local attorney Tarren Collins remembers a time before the development, and the disputed signage.

“When I grew up here it was all wide open,” she said. “It was our playground.”

But the development came, and soon after, the signs on the bluff. According to a Jan. 8 letter sent to the city of Pismo Beach from the Coastal Commission’s enforcement division, members of the Bluffs HOA began to complain about trespassing in the area in 2013, and the signs went up not long after that.

From there, the situation escalated. On Jan. 4, 2015, Collins noticed that a private security guard was paroling the area, and in some cases he was actually confronting people.

“He was telling people they couldn’t go off the trail, even though it’s public access,” she said. Both Collins and LoCante said that the guard would also contact Pismo police is some cases.

LoCante knew something needed to be done.

“How do regular people like me fight that?” he said, pointing to the large mansions that overlook the trail.

The answer is the California Coastal Commission. In a sternly worded Jan. 8 letter, Commission Enforcement Supervisor N. Patrick Veesart asserted that the area in question was part of blanket easement and was open to public access, according to provisions detailed in a tract map dating back to 1991.

“Placement of signage and guards restrict the public from using Lot 25 and this trail, challenges and disrupts the public’s ability to access the beach,” Veesart wrote. According to the letter, the signs were a violation of the California Coastal Act and could result in the HOA being fined $11,250 per day for each violation. The security guard soon disappeared, according to Collins and LoCante.

Speaking to New Times, Veesart said the commission was working with the city and HOA to address the issue without having to resort to fines. Signage in areas like the bluffs above Pirate’s Cove beach can be a challenge, according to Pismo Beach Interim Community Development Director Michael Draze. He said the city’s concerns include the danger of the bluffs area, which feature steep, rocky ground that can sometimes result in deadly falls to the beaches below.

“We really would rather people not go over the cliff there,” Draze said. “But how to sign it seems to be the point of contention.”

Draze said that based on the communications with the Coastal Commission, the problem could likely be resolved by changing the wording on the signs so that they could still warn the public of the danger without making it seem like they are prohibiting access to the area.

“My understanding, after reading the letter, is that they have a problem with the wording,” he said.

As of Feb. 3, it appeared that the issue had been somewhat resolved. The “Private property. No trespassing. No camping” signs along the trail were completely taken down. The signs that read “Hazardous bluff area: Keep out” had been partially covered up to simply read “hazardous bluff area.”

For LoCante, it was a small victory for pubic coastal access.

“Personally, I felt very pleased and also relieved to see the signs taken down,” he said.

While they can both claim a win for Pirate’s Cove beachgoers, LoCante and Collins said more could be done. Collins said she thought the signs should include language that encourages public access as well as warnings about getting to close to the bluff’s edge. LoCante said some of the remaining signposts block some of the view of the ocean, among other small changes. But LoCante was still happy to see progress.