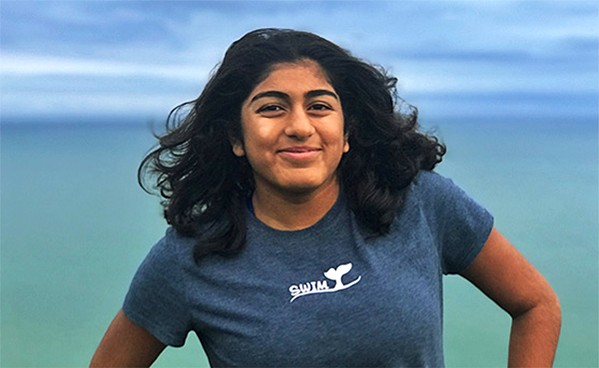 She brought her advocacy to Estero Bay on June 27 and swam 11 miles in about eight hours to raise awareness and funds for the nonprofit.

More said her interest in the nonprofit stemmed from her parents' involvement with the organization when she was an infant. Her parents wanted to give back in some way and help kids in India because that's where they're from, she said.

More's family sponsored eight children through Children International, and she knew she wanted to do more. At 10 years old, she became the youngest person to climb Mount Kilimanjaro, the highest point in Africa.

"I was getting some attention, and I thought ... instead of focusing on me, I could use that media and move it toward something that's more meaningful," she said.

More decided to mark her successes in the name of Children International.

Since then, she's been setting records for hiking and swimming and has raised more than $58,000 for Children International along the way. More's swimming achievements include the Santa Barbara Channel (12 miles), the Catalina Channel (20 miles), and the length of Lake Tahoe (21.3 miles).

Last year, More organized the Escape from Alcatraz to Escape from Poverty swim around Alcatraz that raised more then $8,000 for the nonprofit.

In order to keep the momentum going, she organized another fundraising campaign called Angel's Hope that focuses on raising funds for an educational scholarship. Her goal is to raise $1 million over the course of two years and three swims. The swim to kick things off was in Estero Bay. It was planned to be a 14-mile marathon but she only completed 11 miles due to an unforeseen dip in the water temperatures and strong winds.

Although she didn't meet the mark that time, her efforts aren't lost.

"I try to link everything I do as a way to fundraise because I think every opportunity I have to fund raise, I should take it," More said.

In terms of this fundraising campaign, she said, she wants to give kids who are just like her more of an opportunity to be educated.

More took a trip to Guatemala, one of the many countries where Children International is stationed, and met some of the kids. Before that, she said, when she thought of kids in need, it reminded her of the posters she'd seen at bus stops—the image of a sad looking child next to text asking for a donation.

"I think I was never really able to connect with them because those kids were always looking for their next meal and not really able to live a life," More said.

That sentiment quickly faded as More realized they were kids who enjoyed sports and school just like she did.

"I think children have the ability, especially when we grow up, to change the world. But we could be held back by certain circumstances, so we can't. I hope to give kids around the world the ability to both achieve their dreams and change the world," More said.

To keep up with More's fundraising campaigns and to learn how to donate to her efforts, visit angelmoreblog.weebly.com.

JB Dewar's Tractor Restoration Education Program, a nonprofit organization, announced this year's program winners during a luncheon at the 28th annual Cattlemen and Farmer's Day. This year's grand prize winner is Paso Robles High School senior Tyler Schimke, second place went to Templeton High School freshman Shane Brennan, and third place was awarded to Templeton High sophomore Walter Lorz. These students have been working since October in preparation for this competition by restoring an antique tractor, completing their record book, and giving an oral presentation to a panel of judges. For more information about the local competition or the restoration program, call (805) 540-7122 and ask for Rachel Dewar. Δ